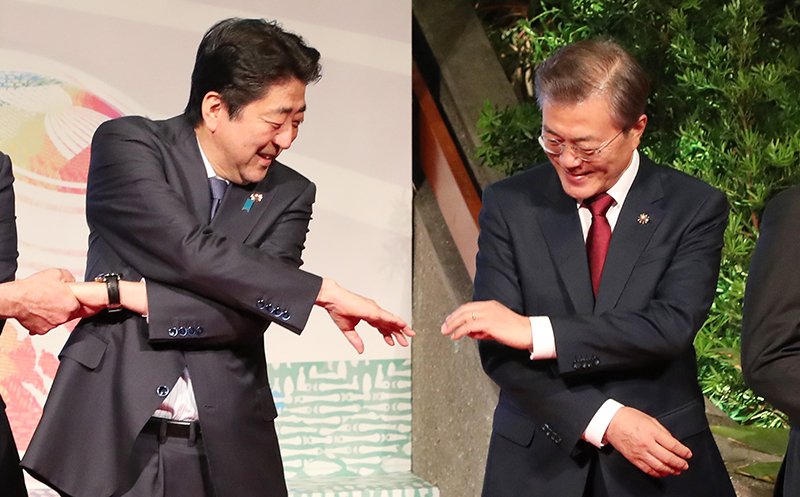 Present a map of East Asia to Koreans and then to the Japanese and you will soon find that they each use different names for the same territory. What Koreans call the “East Sea” is the “Sea of Japan” for the Japanese; the Japanese will refer to a tiny island in that sea as “Dakeshima,” while Koreans will label it as “Dokdo.”

Dispute over geographical appellation cannot fully capture the deep-rooted tension that exists between Korea and Japan. The former Japanese Empire’s colonial rule of Korea between 1910 and 1945 left indelible scars that are yet to be soothed to this day. Ever since Korea’s independence, the leaders of both countries have struggled to grapple with conflicts rooted in this historical legacy; sporadic disagreements became routine, which hindered continuous cordiality.

It came as a surprise, therefore, that the recent dispute spilled over to trade and security for the first time, following the Korean Supreme Court’s order to Japanese firms to compensate the victims of forced labor during World War II. Immediately afterward, Japan’s foreign minister summoned Korea’s ambassador to condemn the ruling as an act that “fundamentally undermines the legal basis that has served as the foundation of the friendly relationship”. The standoff soon intensified when the Korean military alleged a Japanese patrol plane of purposefully flying at a low altitude around a Korean vessel, while Japan accused the vessel of targeting fire control radar towards the plane. The situation quickly escalated in March when a Korean district court approved the request to seize the assets of Mitsubishi Heavy after its inaction of the earlier order.

What drew this dispute into the limelight was Japan’s decision to expand the battleground to trade, to which Korea retorted by extending the dispute to military alliance. In July, Japan’s Ministry of Economy, Trade and Industry (METI) announced export restrictions vis-a-vis Korea on chemicals that are crucial in manufacturing semiconductor chips, which account for 21 percent of Korea’s total exports. METI stated that a considerable loss of trust was what led to the decision. After a month, the Japanese government removed Korea from a list of countries to which it gives preferential trading terms. Korea reciprocated, putting restrictions on exports and strengthening safety regulations.

Among widely-held views for this showdown is that it’s a culmination of international agreements that never reached a comprehensive settlement. The Treaty of San Francisco in 1951 that officially concluded the Pacific War led to the territorial dispute, as it failed to explicate which country can claim sovereignty over Dokdo (Dakeshima). The treaty also required Japan to make separate agreements over war responsibility. The resulting bilateral treaty of 1965 effectively normalized the relationship between the two countries but led to a significant amount of controversies that have both strained diplomatic relationships and divided public opinion.

At the time when the treaty was signed, Korea was governed by a military junta that came to power in 1961. Among the top priorities of the regime was acquiring its legitimacy through high economic growth. This aligned with America’s geostrategic interest. At the height of the Cold War, the Kennedy Administration sought to strengthen its containment in the Pacific region by proactively assisting economic development. The necessity of normalization became more pronounced after North Korea forged a mutual defense treaty with Soviet Union and China. For the U.S., restoration of the relationship between the two Koreas was crucial in curbing the Eastern Bloc. At the same time, the U.S. was facing huge balance of payment deficits due to continued foreign aid. On the other hand, Japan, one of the biggest beneficiaries of American aid, was on the eve of rapid economic growth and was setting its eyes on Korea to expand its market abroad. Such fusion of different domestic and international dynamics was the backdrop that enabled Korea and Japan to sit at the negotiating table. Nonetheless, the negotiation process faced unprecedented opposition from the Korean public, many of whom were the first-hand witnesses and victims of the colonial rule.

When the treaty was ratified, the provision that evoked the biggest controversy was the clause that stated the Japan-Korea Annexation Treaty was “already” null and void. Roughly speaking, the single word “already” is where the fundamental disagreement roots from. Korea interprets that if the treaty was actually “null and void,” it is equivalent to confirming the illegality of the treaty per se — meaning that the 35 years of colonial rule were unlawful as well. In contrast, the Japanese government argues that it became null and void by the Treaty of San Francisco — therefore already null and void. This implies that the annexation treaty was legal, agreed on the basis of sovereignty and volition. This decisive ambiguity is closely tied to the crux of today’s dispute, which circles around the question of whether individuals’ rights to claim their losses were effectively relinquished by the treaty.

Included below is an excerpt from the agreement:

Article II, Section 2, Agreement on the Settlement of Problems Concerning Property and Claims and on Economic Co-operation between the Republic of Korea and Japan

The treaty settled on the Japanese government providing $800 million of grants and low-interest loans in return for the Korean government relinquishing its claim to its rights as a nation. In response to this ambiguity, Korea’s Supreme Court stated in 2013 that the nature of compensation in the case is different from that of the treaty. It explained that while the treaty’s compensation was essentially a political agreement that settled on the financial and civil liabilities between Korea and Japan as state entities, the court saw the plantiffs’ claim as compensation for their harm done by Mitsubishi’s illegal mobilization and forced labor — therefore not considered as settled by the 1965 treaty.

Prospect of reconciliation remains dim. Leaders of both countries are engaged in a blame game by brandishing their own principles: Abe has denounced Korea for violating international promises while Moon called on Japan to respect Korea’s judicial independence.

Yet when observing the underlying currents, the situation rather resembles a game of chicken: both risk high loss in political capital if one of them were to back down. Both have received criticisms alleging that they are strategically rallying their supporters at the expense of their deteriorating relationship.

Japan’s changes to its trade policy towards Korea were announced on the day when the House of Councillors (equivalent to America’s Senate) election campaign officially began. Having set the revision of the constitution for rearmament as the primary goal of his remaining tenure, Abe aimed to maintain strong support from conservatives and ultraconservatives who tend to be skeptical towards the neighboring countries’ requests to acknowledge the responsibility of the past. Similarly, Moon finds it extremely challenging to accommodate Japan’s demands, especially since he promised to correct the former administration’s ham-handed approach to resolving the history. His Democratic Party caused much stir when its think tank stated in a report that the government’s hard-line policies towards Japan will benefit the party in next year’s parliamentary election.

A more fundamental factor underlying the disagreement is that once a treaty is ratified between nations, it is extremely difficult for a signatory to adjust or retract the provisions, regardless of public resentments or changing political situations. Although each country’s interpretation of the 1965 treaty is radically different, there is no method to diplomatically enforce one side’s view nor coordinate the difference. Similar deadlock happened in the administration of Park Geun-hye, the impeached president who is also the daughter of the president who signed the 1965 treaty. In 2015, Korea and Japan agreed over the issue of ‘comfort women’ — women who were forcefully recruited as sex slaves in World War II — which resulted in Japan transferring 1 billion yen to support the victims. For the first time the two governments made a formal effort to address the issue, but it was highly unpopular to the Korean public, especially because it completely left the surviving victims blind to the entire negotiation processes. Korea’s current president Moon Jae-in promised to re-negotiate an agreement that is more acceptable to his people when he ran for office. However, after he was elected president, Korea’s Ministry of Foreign Affairs  announced that the formal agreement is not to be annulled unilaterally; Moon himself also reaffirmed Japan’s PM Shinzo Abe by declaring that the deal will not be altered.

Intractable circumstances notwithstanding, the stakes are too high for the two countries to continue their confrontation. Economic damage inflicted by trade retaliations are yet to surface. However, with their economies not only depending heavily upon exports but also suffering from US-China trade war, interstate uncertainties may result in much larger consequences than the retaliation measures themselves.

Korea’s decision to terminate GSOMIA, a military intelligence-sharing agreement with Japan signed in 2016, has heightened worries of destabilizing the trilateral alliance with the U.S. in the region. Its absence per se does not make major impacts on the alliance’s military cohesion, as the countries can continue to share information by utilizing America as an intermediary. Yet this is particularly an ill-timed juncture to weaken security ties; denuclearization talks with North Korea are teetering while China’s continuing tension with the U.S. also works against stability for both countries. To this end, the U.S. has warned that the termination has broader implications, as it may send a “wrong message” to surrounding states as a sign of decoupling among the allies. In contrast with its relatively distanced standpoint in trade disputes, America has increased pressure on the Moon Administration to reverse its decision. As the treaty officially ends on November 22nd, Korea’s government insisted that normalization of relationship with Japan must precede any reappraisal of the treaty.

As convoluted as the situation is, possibilities of ceasefire remain open. Above all, Moon are Abe are all too aware that prolonged dispute is destined to end up in a lose-lose ending. Make no mistakes — prioritizing history settlement or future-oriented cooperation has been one of the trickiest conundrums in Korea and Japan’s foreign policy. At the same time, tit-for-tat diplomacy and abrupt ruptures only serve to deteriorate their national interests. Dialogue over retaliation.