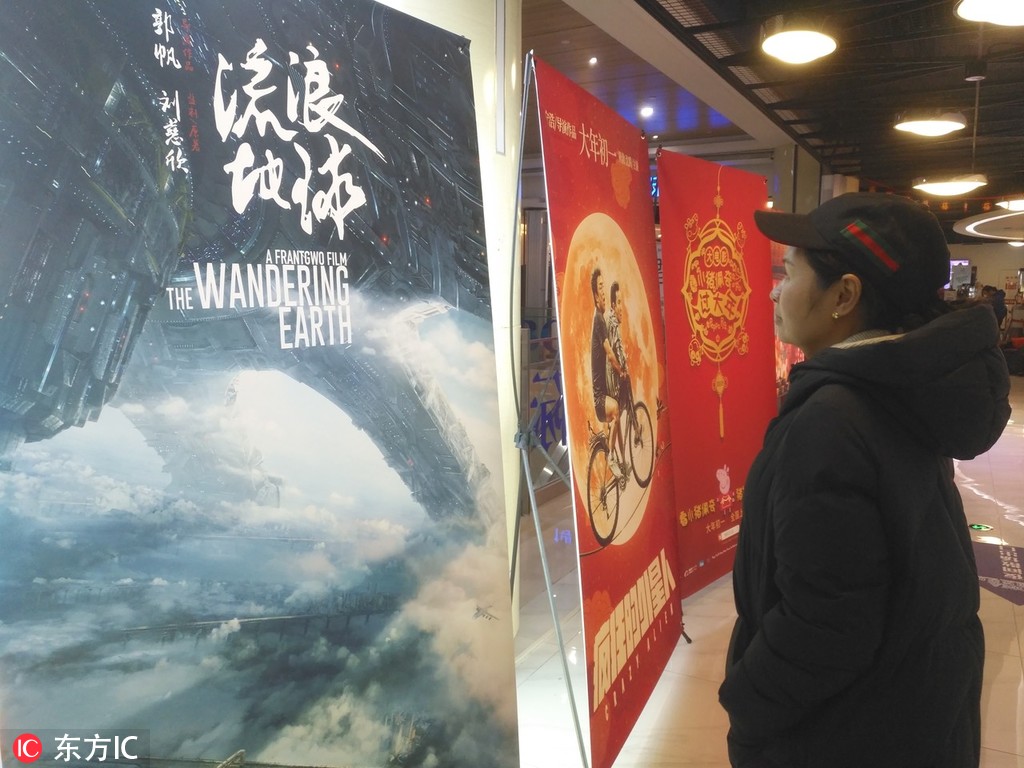 The Wandering Earth and the “new” Chinese nationalist idea

Recently, a Chinese sci-fi film called The Wandering Earth has not only made headlines in Chinese mainstream media but has also aroused heated discussion about its quality, symbolic meaning, and theme, reflecting the emergence of a new type of nationalism among the Chinese general population.

What is The Wandering Earth about?

“The sun is aging rapidly. It will keep expanding and devour the earth.” Like many Hollywood films, the story of The Wandering Earth starts with an apocalyptic problem. However, The Wandering Earth is one hundred percent “Made in China”. And the Chinese provide a novel solution: all countries unite together, constructing ten thousand “earth engines” to push the planet out of the solar system.

Opening on Feb. 5, the film pulled in a record-breaking $606.8 million globally after 13 days. The number is still rising. However, this film is not purely an economic success, but the landmark of China’s film industry as it enters the cinematic space race. State-run news agency Xinhua described the film as a “new dawn for China’s sci-fi filmmaking”.

Why is The Wandering Earth so exciting to the Chinese?

The Chinese film market has been booming in the last 10 years. China’s box office grew from only $600 million in 2008 to $9.1 billion in 2018. However, for a long time, Chinese audiences were disappointed at the overall quality of Chinese-made films and Hollywood films remained dominant in the Chinese market. Audiences longed for outstanding domestic films to compete with the West.

The comments of Chinese audiences, and official media

One popular short comment on Douban (Chinese IMDb) shows how some Chinese audiences see the difference between The Wandering Earth and a typical Hollywood movie:

• Earth is going to be destroyed:

Hollywood: let’s build a spaceship and run away

The Wandering Earth: let’s build engines for the earth and escape with the home

• To save the World:

Hollywood: the protagonists, after fighting hard, accomplish the mission, save the world, and become the hero. Some irrelevant supporting characters might die

The Wandering Earth: the protagonists keep dying. Every time when they are about the finish the job, some other people have finished it. Everyone is the hero and this is a collective mission for all

Of course, this comment is playful. The author was joking about the ending of The Wandering Earth: almost all the protagonists died eventually. Nevertheless, through the comments, it’s not hard to see how proud Chinese audiences are about the unique Chinese philosophy.

First, the attachment to one’s family and homeland is the central premise of the film. The concept of home and family means more than a relationship with people; it also includes a return to a geographical homeland. “Without the Earth and our families, what is the meaning of remaining the human civilization,” said Liu Peiqiang, the leading protagonist.

Secondly, collectivism is another core value of the Chinese. Unlike Hollywood films like Mission: Impossible which has one hero who saved the world, The Wandering Earth created the term  “saturated rescue”, which means using all available personnel and resources to achieve one primary goal at any cost. Consequently, besides protagonists, there are thousands of other people working on the same mission to assure success.

Thirdly, the idea of a “community of shared future for mankind”, created by former Chinese president Hu Jintao and adopted by current president Xi Jinping, is frequently mentioned in all different kinds of comments as well. Among those commentators, the most famous one is the article of Zhongshen (The Voice of China) in People’s Daily, the official newspaper of the Central Committee of the Communist Party of China. In the article, Zhongshen said that the film is derived from reality: the quick development of the Chinese economy and technology has provided the source for sci-fi novels and films. As the newspaper rarely writes about films, Zhongshen’s article shows the attention the Chinese government pays to the new propaganda field. In fact, during the past five years, there has been a clear sign of the emergence of new nationalist ideas in popular Chinese films.

The emergence of new nationalist ideas in the Chinese film market

One of the most famous “Red Movies” was Tunnel War in 1965. The film tells a story about a small town where people defend themselves from the Japanese by use of a network of tunnels during the Anti-Japanese War (also known as the Second Sino-Japanese War in the West). Like many other “Red Movies”, Tunnel War tried to stimulate people with a sense of shame and traumatized memory of the Japanese.

In fact, even in the 21st Century, the “anti-Japanese war” is still one of the most popular topics of Chinese TV series and films. In 2015, 41% of popular TV series in China are the anti-Japanese theme. By continuously reminding the Chinese of the painful memory of being invaded, the Chinese government creates a nationalism based on negative and passive feelings. For decades, a standard sentence in history class in China is “Lagging behind means exposure to invasion.” In other words, if your country is not strong enough, it will be bullied by others. The core value of the old nationalist idea is “working hard to protect ourselves.”

However, the film industry has changed now, along with Chinese nationalism itself. In 2017, the film Wolf Warrior II was released. Just like The Wandering Earth, Wolf Warrior II, with its patriotic plot, special effects, action sequences, and the cast’s performances, soon became a blockbuster. It’s about a former Chinese soldier, with the help of the Chinese Navy, saving hostages in Africa. The film showed the military strength of China and its rising leadership in the world stage. Most importantly, in the film, the Chinese government is the first country evacuating its citizens. The Chinese government also helps to solve the dispute between two parties. Along with the scene, there is a famous line:

“The citizen of the People’s Republic of China, please never give up when encountering danger oversee. Please always remember: there is a strong and powerful motherland behind you.”

For the first time, instead of showing vulnerability, a popular mainstream film started to show the strength of the military and political power of the country. Pride and confidence become the new nationalist idea. In fact, the box office tells everything: Wolf Warrior II collected a surprisingly high $874 million. It was, and still is, the only Chinese film ever to be included in the list of 100 all-time highest-grossing films worldwide, making it the highest-grossing non-English film of all time.

Of course, just like an old saying in China, “art is the reflection of the reality;” the new nationalist idea in China is not only limited to film. Since 2013, the Chinese government began to change its policy of “keeping a low profile while developing,” and became more active and vocal in international issues. For instance, China initiated the Asian Infrastructure Investment Bank to consolidate its leadership in Asia in 2015.

Meanwhile, China has started to be tougher to its neighboring countries militarily. In 2013, when the Japanese government tried to “nationalize” the Diaoyu Islands (Senkaku Islands), the Chinese government sent a marine surveillance ship to the disputed area to claim sovereignty. Similarly, the Chinese government hasn’t backed down when facing the Philippines and Vietnam in the South China Sea. With a stronger navy and a growing economy, China is becoming more and more confident and aggressive when dealing with other countries.

Rapidly growing, China can no longer remain low-key or encourage its citizens with war memories. Instead, the Chinese government has changed its mindset and started to build a more positive and confident image. With the influence of the shifting policy, there is a shifting nationalist idea in China: China is now strong enough to protect its citizens and lead the world. Such an idea has also projected onto Chinese film industry.

It seems that The Wandering Earth is just a beginning.