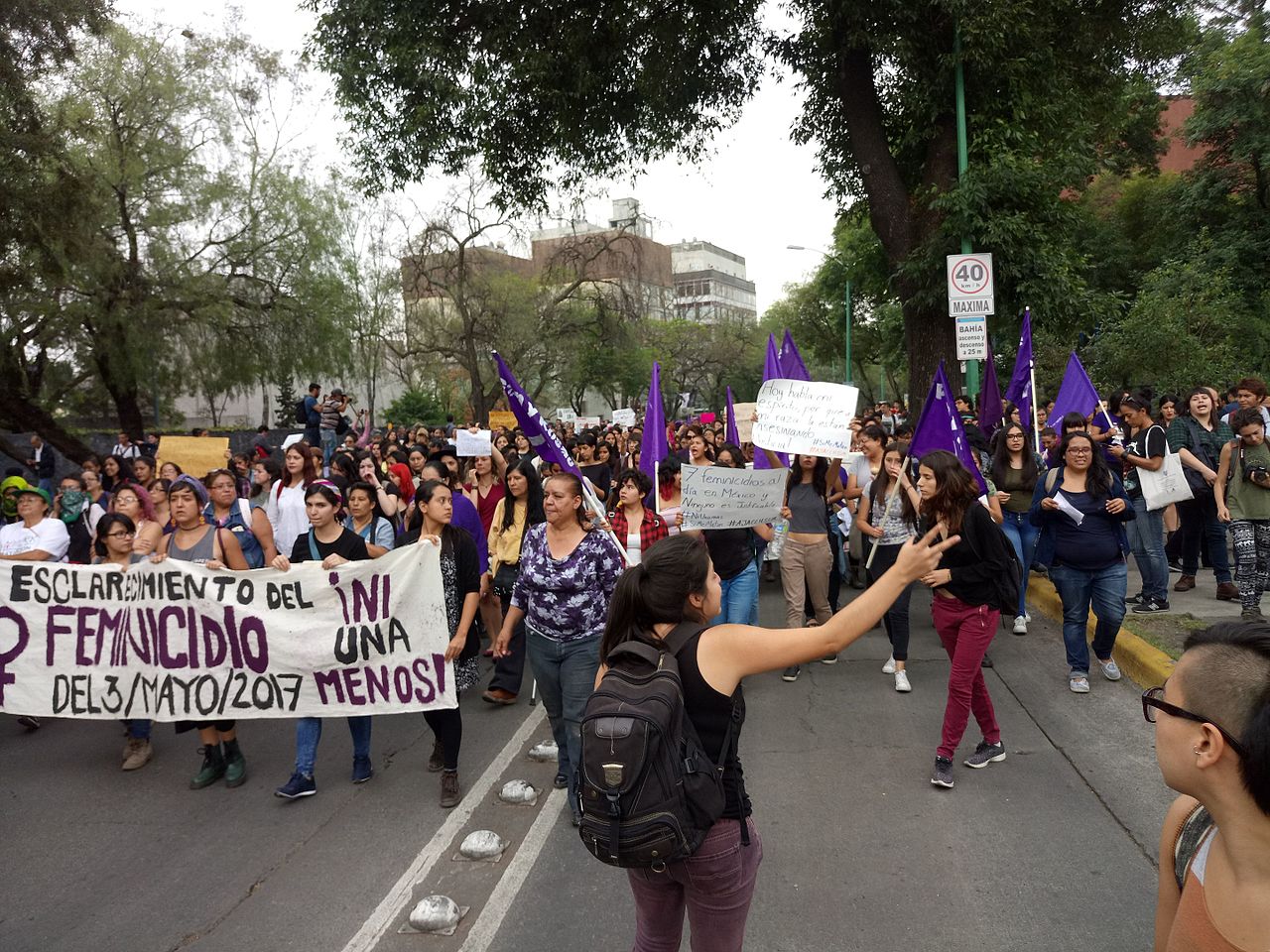 Femicide in Mexico: What Happens when the State Looks the Other Way

Laura Velazquez had to identify her sister Diana’s body by her braids because her face and torso were left unrecognizable. Diana left her house in Chimalhuacan, Mexico, on July 2, 2017, where she was raped and choked to death by multiple men. Now, almost two years later, the authorities still have not found her murderers, who presumably still walk free. Perhaps the worst part of Diana’s case is that it is so terribly normal.

Mexico is a deadly place to be a woman. On International Women’s Day this year, while American women were marching for representation and equal pay, women in Mexico were protesting the failure of law enforcement to investigate the murders of their daughters. For more than two decades, rates of misogynistic murder of women, or femicide, in Mexico have been alarmingly high. Nevertheless, the problem remains largely unaddressed by the Mexican government. The femicide epidemic is a powerful illustration that the state cannot be given the titles of both judge and executioner. When state actors are not held accountable by external parties, they face no incentive to make the effort to properly enforce their own rulings – in other words, they look the other way. The task that Mexico is faced with is not only to create a unified national system for dealing with femicide but to make sure that system is properly implemented in a way that prioritizes the lives of women over the reputation of officials.

The statistics are staggering. In 2018 alone, 3580 women were killed in Mexico. And it’s not simply that women are murdered. 98% of the time, they are killed by men, often by a relative, partner, or someone close to them, which speaks volumes about the patriarchal aspect of these attacks. Moreover, the killings often have a sadistic motive: victims are frequently tortured or sexually abused before their deaths. To make things that much worse, women who speak out against murders of their friends or loved ones have to fear deadly retaliation, even in the most public of places: when Marisela Escobedo protested the failure of the authorities to investigate the murder of her daughter, she was assassinated – in front of the state capitol.

It’s important to remember that femicide should not be seen as an “isolated incident”, per se. It should actually be seen as part of a larger pattern of machismo and its expression via violence. Two-thirds of Mexican women will experience intimate or domestic violence in their lifetimes. Murder is merely the most grotesque result of societal thinking that devalues women’s bodies and lives. So while addressing femicide will clearly require ensuring that murderers are properly punished, in the long run, it will also require dismantling social structures that enable widespread misogynistic thought and behavior. The government needs to be actively involved, rather than playing the role of a complicit bystander.

The Response so Far – and Why It’s Failed

Not surprisingly, the dire situation for women has prompted backlash by activists both in Mexico and in the international community. Many, though not all, states have passed laws criminalizing femicide. However, these statutes are far from uniform, making it hard for third-party watchdog groups to ensure their proper implementation. For instance, there is no agreement on whether femicide is a crime in and of itself, or if it is an aggravation of homicide. It is important to recognize that femicide is not merely “female homicide” – it is the “killing of women for gender-based reasons.” Therefore, to effectively combat femicide, those gender-based motivations need to be addressed.

To make matters more difficult, the procedure for prosecuting the crime varies widely. Perhaps the most glaring issue is that only 15 out of 33 states even mention femicide in their criminal codes. In effect, this means that in the absence of federal legislation, almost half of women in Mexico live in a state where their murderer might not even be charged with a crime. They could not be charged with femicide, and without its criminalization, the act is rarely charged even with homicide. While the efforts of certain state governments are admirable, any meaningful deterrent would definitely include a unified national approach to the charging, investigation, and punishing of femicide. By recognizing femicide as a uniquely-motivated crime across all of Mexico, apathetic state governments would be required to not only thoroughly investigate these murders but to do so in a way that acknowledges their gendered motivations.

In the international sphere, the violence has attracted attention from human rights groups, like Amnesty International and Human Rights Watch. Most notable, though, is the ruling of the Inter-American Court of Human Rights. Observers had long suggested that a ruling by the Court could provide an important precedent that would require Mexico to criminalize and properly punish femicides. However, the Court did just this in 2009, finding that in failing to provide adequate channels investigate a woman’s murder, Ciudad Juarez (and by extension, the Mexican government) had failed to protect her human rights. Despite this ruling, attacks on women have not stopped, nor are they being effectively prosecuted. The Court’s decisions were limited in their impact because of their lack of implementation ability. In order to “protect human rights” as ordered by the Court, a simple decision is not enough: the Mexican government needs to take concrete nationwide steps to remedy the rights violations they were charged with in this decision. This points to a fundamental problem for those who want to end the femicide epidemic: even if it were made a crime with proper investigation procedures across the entire country, that law would be meaningless if not upheld.

The government has tried to take steps to demonstrate their responsiveness to the issue, but in many cases, the initiatives have neither been received well nor been particularly effective. One of these is the “Alerto de Genero” (“Gender Alert”) issued by the Ministry of the Interior to particular states where gender violence is seen as particularly threatening. However, it hasn’t even been issued to some of the states with the highest rates of femicide. Additionally, it’s not clear what a “Gender Alert” would require of a state government. As a result, the reaction of state governments placed under Gender Alert has been one of annoyance, rather than a motivation to act. In fact, there is some evidence that the primary response of states placed under Gender Alert has been to falsify records so that it appears that gender violence has been dealt with, rather than actually addressing said violence. Many women’s rights groups agree that the Gender Alert program so far has been impotent in its capability to actually bring justice to Mexican women.

The failure of the administration to uphold its promises is also a central issue. While populist President Andres Manuel Lopez Obrador has promised to take steps to dedicate more government resources to the prevention and investigation of femicides, his actions fall dramatically short of that goal. The Lopez Obrador administration has taken no clear action so far on the issue, and its behavior towards women’s rights may actually be exacerbating the fundamental problem. His government has substantially cut aid to shelters for abused women and to hundreds of civil society organizations that fought to protect victims of gendered violence. While this may not seem to be directly related to the femicide epidemic, the fact of the matter is that these changes functionally eliminate support that was once given to women. Without these programs, many Mexican women will now be more dependent on their husbands or male relatives. This would make domestic violence or femicide that much harder to prevent. Any program created to prevent and/or punish femicide will be unable to effectively do so when women are still institutionally powerless and without freedom or mobility.

Goals for the Future

It is clear that the government response to the dangers faced by Mexican women is woefully inadequate. After years of patchwork responses and failed accountability, there needs to be a rethinking of how this problem should be addressed. The evidence so far suggests that any successful solution will have a few key traits. One, it will be at a national level. There is no reason that a woman in Chiapas should have different legal protections from a woman in Jalisco. While the national government’s actions have not been successful so far, it is clear that a state-by-state approach will not work. With plenty of independent oversight, national action by the Mexican government will be the most effective way to combat femicide. This leads us to the second criterion: to ensure that agencies are actually working to help women and track down committers of femicide, instead of just checking boxes saying that they have done so, third-party organizations need to be substantially involved. Policies should be created in consultation with interested non-enforcement entities, including women’s rights groups. Otherwise, the incentive will be to “look the other way” to create the illusion of compliance. NGOs and civil society organizations should be allowed to oversee and critique the agencies working to stop femicide. Finally, to meaningfully address femicide, the rest of government policy should actively protect and empower women. It is not enough to make femicide illegal if it can still be perpetrated without retribution due to social and economic inequality.

It is of utmost importance that the Mexican government take real action to protect Mexican women. Not one more family should have to deal with the crushing grief of a daughter murdered. The only way to guarantee this is through unified national action and meaningful oversight to hold the government accountable. The lives of its citizens are at stake, so the government needs to make protecting women its highest priority.