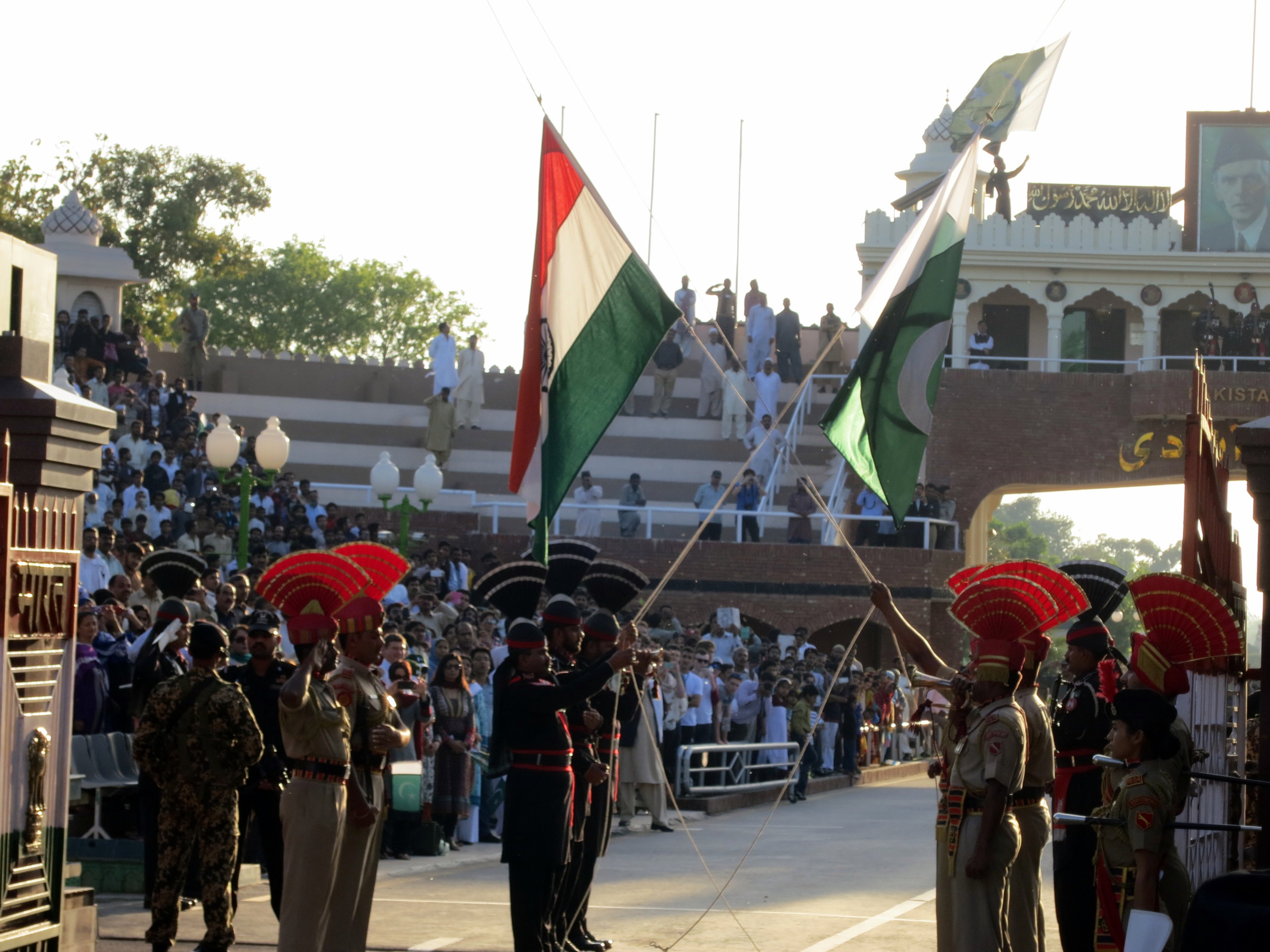 Legend says that on the great Mughal Emperor Jahangir’s deathbed, he was asked what his life’s most treasured experience had been? To this he replied; “Kashmir – everything else is worthless.” Given to his deep love for Kashmir, he had famous words of Farsi poet Amir Khusro inscribed in his garden:

Kashmir. The land widely synonymous to paradise across the South Asian peninsula. But among the beautiful green valleys lies a land of divided nations, religion, bloodshed and above all, the shadows of partition. The 1947 Partition of British India, an event that lodges on to anyone aware of the decolonisation of South Asia, left behind two nations split from one another: Pakistan and India. This division was not a peaceful one, especially when it came to deciding the integration of the Kashmir valley, considering it being a Muslim majority yet relegated to be part of a majority Hindu India, an issue both nations are still in conflict over. A large area of the valley is currently under the Indian control with Pakistan controlling some of the periphery. At the moment, the land is divided by a Line of Control (LOC), the main host of many bloody confrontations and tense skirmishes.

In an interview with the Davis Political Review, Anam Zakaria, the Pakistani author of the best selling book Footprints of Partition framed the partition as an event that “crystallized communal identities and led to hostile borders”. This is a statement many would stand by as populations on both side of the border continue to suffer until this day. In Indian occupied Kashmir, human right violations against the Muslim population has been a source of major hostility. Resistance movements against the injustices and oppression of Kashmiri Muslims by the Indian Army have sprouted around the region but to not much avail. These insurgents are seeking a way out of the Indian occupation by either complete independence or a merger with Pakistan. Many forms of peaceful protests have been suppressed by the Indian army while thousands of political prisoners are in jail with no proper representation. However, their demands have only led to increased military control and hardened nationalistic policies. The increased military presence in Kashmir is due to local clashes and resistance movements that have made the area almost inaccessible to those who once looked forward to its green mountains. This has had adverse effects on the development and growth alongside tarnishing the legendary myth of the land that was called firdous, or paradise, by so many.

Pakistan, being a fairly young country, is not sheltered from strife. Given to international controversies, it has already faced the brunt of isolation and is rapidly facing the impacts of declining tourism. Making this environment even more strained is the fact that both countries are nuclear powers, something that brought the region on the brink of a nuclear war in 1999 after the Kargil crisis over Kashmir. Nationalistic sentiment for both countries has led to exchanges of artillery fire across the LOC many times and an escalation towards a nuclear exchange is not completely impossible. Due to such a threat to not simply both countries but the entire international community, the political elite of Pakistan have begun reforming their foreign policy, with Prime Minister Imran Khan constantly stressing upon the importance of peace talks over Kashmir with Indian Prime Minister Narendra Modi.

Prime Minister Modi is subject to mixed criticism and support due to his far right affiliations under the Bharatiya Janata Party (BJP) and Rashtriya Swayamsevak Sangh (RSS) paramilitary connections, a right wing nationalist organisation believed to be involved in many sectarian crimes in India. As Chief Minister of Gujarat, his involvement in anti-muslim riots have also continued into criticism of the hardline Indian policies of the BJP towards minorities, with many hate crimes occurring during their time in power. Fact Checker reports that over 76 percent of Indian hate crime victims over the past ten years to be from the Muslim minority. Such a sentiment seems to be fueled by the 1947 Partition and the subsequent wars over Kashmir. According to Ms. Zakaria, the partition “was supposed to ensure economic security and protection for minorities”. Instead, it has only fueled, “further marginalization of communities and divisive hate politics” . This argument is prevalent in many contemporary studies of the political dynamics of both countries. The BJP is historically associated with Hindu nationalism, with an extensive background in anti-partition campaigns. It also heavily follows an extensive Hindu nationalistic policy that emphasizes the integration of Kashmir into India. Due to this it also seeks to scrap Article 370, which gives Kashmir the autonomy to draft an independent constitution, something opposed by the Pakistani government.

This fragile relationship of both countries over Kashmir was tested in February 2019 following a tragic terrorist attack in the district of Pulwama in Indian occupied Kashmir. Almost immediately, Indian authorities pointed fingers at the neighboring Muslim state for orchestrating this attack. For Pakistan, the response centered on denying involvement while calling for a collaboration over intelligence between the two countries that could allow for the swift elimination of any terrorist threats. However, the Indian government failed to provide legitimate evidence against Pakistan and the leadership has since then been under criticism for escalating tensions, especially as Delhi coordinated a “surgical strike” to remove alleged terrorist camps. Claims that 300 militants were killed in this airstrike led to both nations preparing for a massive war to break out, fueled by nationalistic sentiments. These claims were refuted by Pakistani authorities denying any casualties and after independent investigations were also backed up by much of the international press.

Given to misleading coverage by local media, the Indian public seemed captivated by the rising nationalistic sentiment against Pakistan.  Propaganda schemes underway painted the airstrike’s said casualties as India’s heroic fight against terrorism, a narrative that could win Modi much public support as elections near. The largest Indian film industry, Bollywood, was one of the biggest influencers as multiple A-list celebrities took to praising their prime minister for his efforts. As these celebrities cheered, Kashmiris within Indian Occupied Kashmir felt a renewed wave of fear as the army increased its assault and revenge attacks unmentioned in much popular media coverage. Various accounts of Kashmiri locals have narrated the fear instilled by the right-wing Hindu mobs after the attack in Pulwama. As a peace gesture, Pakistan released the captured Indian Air Force pilot, Wing Commander Abhinandan Varthaman, but the Indian media was able to turn him into a prop to further escalate tensions. Coverage demonstrating the peaceful and safe treatment of the pilot by Pakistan was systematically removed within India, instead replaced by the image of a heroic officer on a mission to combat Pakistani terrorism.

This recent development in the conflict over Kashmir has revealed the attitudes of both countries towards one another. Various accounts of Modi’s reactions to the events through his campaign rallies have been reported to be tacky and distasteful by those unaffiliated to to his extreme right wing ideology. Comparatively, Prime Minister Imran Khan’s addresses to the nation itself and to India have managed to unite almost every part of the country. Juxtaposing Modi in an eloquently powerful speech, Khan addressed the consequences of war, explaining Pakistani national security policy yet professing no affinity for war while summing up the overall increasing effort to combat terrorism. Their continued refusal to fall prey to the accusations of some sections of the Indian society is commendable. Within Pakistan, from the youth to the celebrities, there was a strong consensus against war over Kashmir. Even though the situation was very critical and there was an increase in military presence in the areas surrounding the LOC and the capital itself, Pakistan’s citizens remained steadfast in their faith that the nation’s leadership was moving towards de-escalation. Various Pakistani journalists have expressed the need to recognize the impacts of conflict with India has on the people of Kashmir. Locals in the country have embarked on an anti-war campaign over Kashmir, calling for a focus on other issues such as illiteracy, poverty and violence. Prime Minister Imran Khan’s televised speech on de-escalation over Kashmir also led to nationwide calls for him to receive the Nobel Peace Prize. For the prime minister, however, it is not him who is worthy of such an award but rather anyone who finds an end to the Kashmir conflict. Such a response has led to further proof that the country is ready to look beyond its nationalistic aims and towards recalibrating political sentiments in Kashmir.

Considering Kashmir is a significantly sore subject for both country, this shift in perceptions about war over the region has stirred the international community. Realizing the countless human right violations, Pakistanis have begun to stress upon the importance of settling the issue of Kashmir. The rights of the Kashmiris should be the focus of international discourse rather than the time and effort wasted on destructive wars for no greater good. In the month following the Pulwama debacle and the face-off between Pakistan and India, the Muslims in Indian occupied Kashmir have continued to face an increase in persecution. Both nuclear nations have a higher responsibility towards the Kashmiris and the decision of not going to war is only a small step among st the massive moves needed to solve this conflict. On Pakistan’s end, a white flag is refreshing while from India, the national election campaigns underway should make an effort to include improvements in the rights of Kashmiris when discussing the greater goals of Indian development. Kashmir needs this much awaited cleanse from bloodshed to maintain hope that it can one day return to being the firdous of legend.