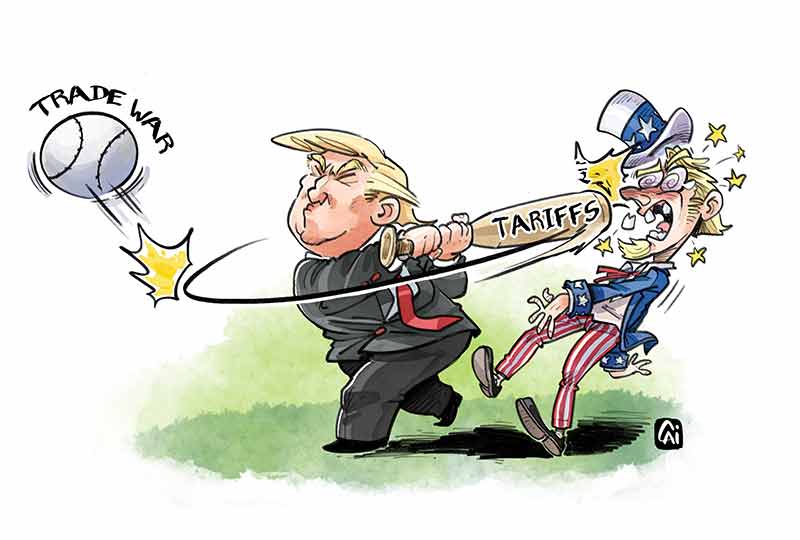 Sharing is Caring: The Politics and Consequences of Trump’s Trade War

Trump’s recent economic policies on levying tariffs against countries, primarily China, that have a trade deficit with the U.S. have consequences that go beyond just harming the other party. The effects of these policies can be felt right here at home, but your average American voter has a bad understanding of basic economics, not to mention the complexities and mechanisms in a trade war. Rasmussen reports that 62 percent of American voters are at least somewhat concerned about the U.S.-China Trade War, with only 32 percent being very concerned. 52 percent of respondents in a different Rasmussen report believe China will benefit from the trade war with 30 percent believing that it is beneficial for the United States. These are not insignificant numbers, especially with the fact that voters are more likely to pick up on Trump’s “toughness” during these wars rather than focusing on the actual content of Trump’s trade policy, making the trade war an insignificant factor in the coming midterms. For them, this is a perception issue, not one rooted in rational economic calculation.

So why don’t Americans care that much about the trade war? Put frankly, Americans really only care about themselves. Protectionist trade policies are geared toward short-term benefits for the protectionist state, but meanwhile, the rest of the world suffers. Just survey the short-term indicators of growth from the business confidence index (BCI), the value of the U.S. dollar compared to the Chinese RMB, the stock market, and interest rates. This egoistic form of politics in our country comes about because American voters vote on what is most proximally going to impact them. However, these self-centered beliefs are contradictory to the idea that the U.S. is a global leader, and therefore, a team player. Trade wars, especially our current tariffs levied on China, lower our status as a hegemon and have long term consequences, all of which we invite when we hurt other countries to benefit ourselves in the short-term.

Interconnectedness in the Global Economy

At any given Trump rally you will hear the cry for “America First,” a slogan that has served as a central part of the Trump administration’s “accomplishments” in the last two years. Trump has repeatedly touted this rallying cry as his vision for a successful and powerful nation. The best example of this vision is his current trade war, but this maneuver is short-sighted and has alienated the international community. Prior to recent trade spats, other nations may have laughed at Trump for his hard handshakes, or expressed anger and ire over his withdrawal from the Paris Agreement. But while these actions are both important, they do not draw forward material consequences that we can yet observe from other nations.

However, a trade war is on a different scale completely, as when we levy tariffs against another country, they can and have levied counter-tariffs in retaliation. This form of escalation is constant and quantifiable, but it also damages any goodwill that is reliant on international free trade agreements. What Trump and his supporters fail to understand, or at least, partially reconcile, is that the U.S. is a major player in the global economy, and when others benefit from our basis of free trade, so do we. While there is data that shows short-term gains from the recent tariffs, such as the Consumer Confidence Index (CCI) and the Business Confidence Index (BCI), which indicate that the U.S. has enjoyed a nice markup from the last six months, the Organization for Economic Co-operation and Development (OECD) general baseline has dropped in response.

This is perhaps the best visualization for why a trade war is not ideal, even for the United States. The purpose of free trade is to benefit U.S. businesses by guaranteeing them a large and expanding market vis-a-vis exports. Free trade thrust the U.S. economy into international trade flows and was one of the first movements towards globalized markets. The ironic calls for America First would echo rhetoric similar to other protectionist movements from other administrations and political factions, but the idea that America has been “out-competed” by other countries is facile. States do not exist in isolated vacuums where they compare scores at the end of the fiscal year. America’s dependency on other nations for imported goods and their reliance on us for our information sector, intellectual property, media, and other exports make it so that it is within our rational self-interest to stave off economic conflicts. Not only that, but the long term effects can also start to be gauged on our more multinational markets such as the S&P 500, which suffered a six-day losing streak and wiped $1.7 trillion dollars of value from the global market. While not entirely clear, this is most likely stemming from the fact that many of the U.S.’s multinational entities gain significant revenue from China. Understanding that other countries will suffer when we benefit is not the global economic mindset that we want to take, given that leveraging tariffs is a double-edged sword. What Trump wants to win in political favor with his base will cost all Americans, including Trump’s supporters, and the rest of the world in the long run.

It’s also not just consumers who will experience the ripple effects of Trump’s trade war. Businesses will also suffer from the tariffs as these measures will lead to price surges for raw material and result in retaliatory tariffs from other nations that damage American exports. In total, the Cato Institute found that over 202 companies were hurt by Trump’s tariffs, the best example of which would be General Motors, who now must raise costs thanks to price surges in steel and aluminum. These direct effects not only have consequences abroad, but here at home as well. And this is what ties this all together in a neat little present. Trump has been playing fast and loose with this nation’s trade policies and economy in order to garner a harder following among his base. In response, countries retaliated. Canada has established retaliatory tariffs on metal, whiskey, and maple syrup. China has responded by putting tariffs on over $60 billion worth of American goods. The EU, Turkey, and Mexico have also launched a coordinated tariff campaign. Even if the U.S. walks out of this trade war with its economy intact, its economic and diplomatic ties certainly will not.

It is clear that American voters are not entirely cognizant or at least apathetic towards what the trade war means for their lives. For many of Trump’s base, the calls for a trade war seems to confirm much of their anti-Chinese phobia, reminiscent from older complaints from middle America of the Chinese stealing jobs. For these supporters, seeing Trump take real steps against America’s primary economic rival is comforting and reifies their belief that the U.S. is still the top hegemon. However, to play into this political fiction would do nothing but cause harm to the average consumer, just not fast enough for them to do anything about it. While the CCI and BCI show upticks for the U.S., the true worry for analysts and experts are the long term impacts of such actions. For one, tariffs mean that there is now a heavy import tax levied on to exporting nations, primarily China. This tax drives up a substantial cost for companies that export the 5,475 named goods that include smartwatches, certain chemicals, and seafood — these costs are then levied onto the consumer, as those companies will not stop selling, rather they will just sell for more. Goods will be priced out of range for the average American consumer with things like appliances, electronics, etc. Second, while Americans will still be able to afford their basic necessities, the problem arises when they start decreasing their overall spending, which stagnates growth and GDP in the U.S. What is significant in all this is that the good faith and credit that the U.S. accumulated when entering past free trade agreements will be all but gone. This lack of free trade will make it difficult for any sort of reconciliation between China and the U.S., which only makes the problem more permanent, with optimists finding it more and more difficult to see the light at the end of the tunnel.

The primary difficulty of understanding the current trade war has much to do with its inherent complexity. However, the fact that it is also masked by short-term benefits makes the trade war more duplicitous as it promises and preys on those who still believe in the American dream. What matters more than the smooth road we are on is making sure that there is still a road ahead. The actions of this trade war have resulted in significant damages to our diplomatic and economic ties to China, Canada, and the European Union. While these nations may still maintain relations with the U.S. out of necessity, the lost potential for growth, the immediate consequences to the consumer, and the impact our actions on the rest of the world cannot be ignored.