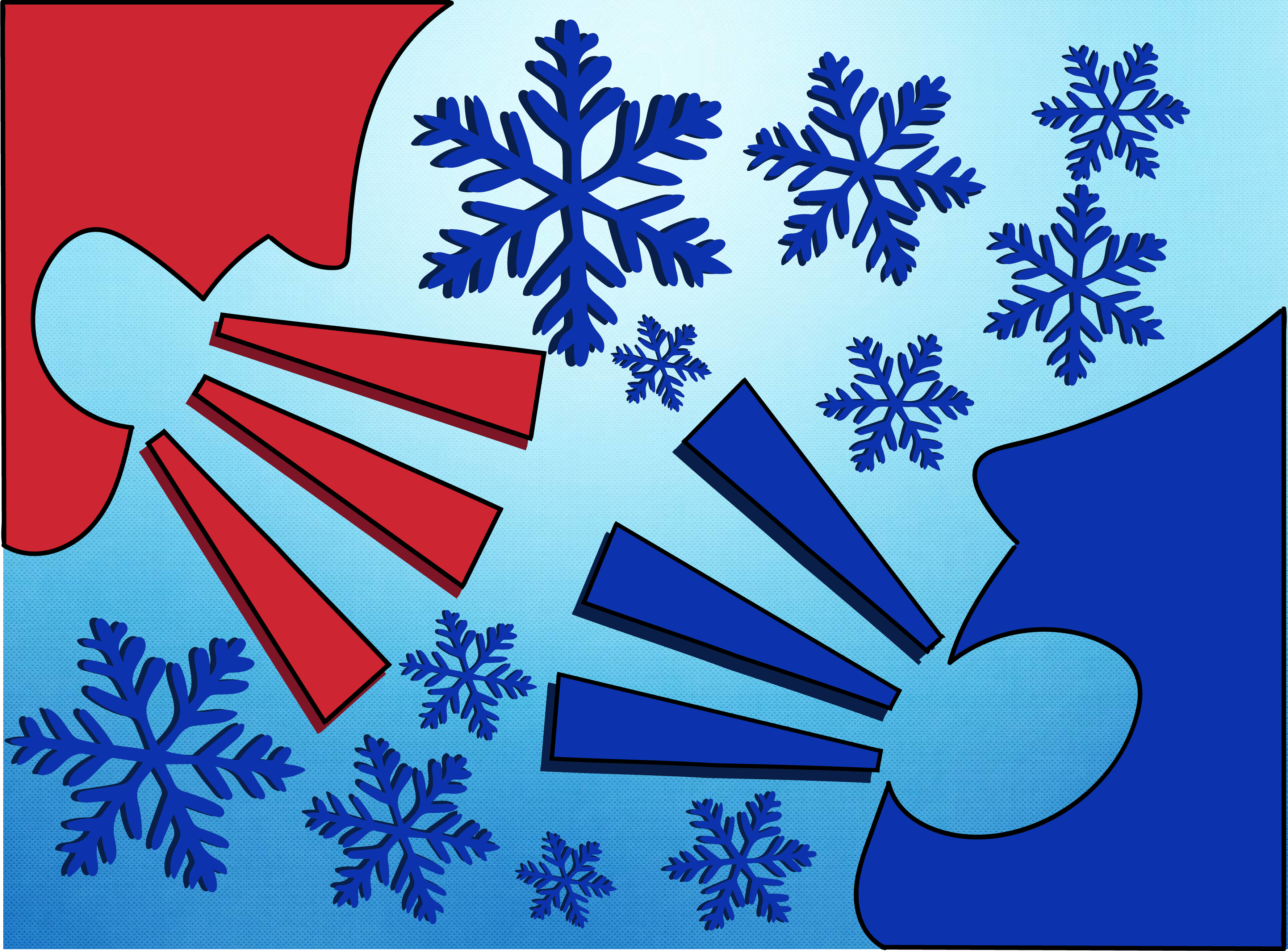 “Snowflake” and the Decline in Civil Discourse

“Snowflake.” A precursory Google search brings about an array of sources. YouTube recommends a video entitled, “SNOWFLAKE GETS OWNED BY MILITARY VET!” Breitbart offers an article entitled, “Triggered: Journalist Snowflakes Scared Trump Supporters Are ‘Turning on the Media.’” Most definitions for “snowflakes” revolve around the same general concept: a derogatory slang term that describes a person as over-emotional, easily offended, and unable to deal with opposing opinions. Media pundits, members of Congress, and average citizens alike utilize the politically-charged term, and understandably so. The term “snowflake,” and other derogatory phrases just like it, reduce controversial topics to a catchy, recognizable, and dangerous ad hominem attack. The ascent of “snowflake” is a symptom of a greater issue: the decline in civil political discourse.

Partisanship is absurdly high in the United States, indicating a general drop in political discourse and amicable relations between opposing parties. A study conducted by Pew Research found that since 1994 alone, partisan divides over political values have widened by up to 36 percentage points. The research also indicated that President Trump’s  approval ratings are the most polarized ratings of any first-year president since President Eisenhower.

The American public has arguably made all of this the most evident. Speakers are continually chased off college campuses by enraged protesters. Milo Yiannopoulos’ presence at Berkeley cost the university nearly $100,000 worth of damage in the wake of protests. The University of Baltimore faced threats of demonstrations after inviting Secretary of Education Betsy DeVos to speak at the fall commencement ceremony.

Those of high ranking within the party establishments, as well as those aspiring to such, are not immune to the effects of political polarization and the ensuing decline of civil discourse. Republican Congressional candidate Greg Gianforte body-slammed a reporter while DNC Chairman Tom Perez turned to harsh obscenities in his speeches protesting Trump’s policies. Democratic and Republican lawmakers across the country struggle to conduct town hall meetings because of the increasing threat of hecklers. This intense polarization has impassioned citizens to the point that civil discourse is no longer the norm. And politicians are not only becoming more aware of this decline in discourse but using it to their own advantage.

The Power of Language

After feeding politicians’ speeches through the Flesch-Kincaid Reading Test, a formula that analyzes word choice and sentence structure to approximate a grade-level ranking, the Boston Globe discovered that presidential candidates with lower grade-level rankings outperformed other primary challengers. Candidates such as Donald Trump and Ben Carson outperformed their opponents in polls, not in spite of, but evidently because of their low speaking level.

Gone are the ways of political civility in which candidates outlined their stances and proposed policies. In its place are digestible phrases such as “Drain the swamp” and “Build the wall” that make clear the frustrations of the American public with the status quo. At the President’s August 2018 political rally in West Virginia, the crowd chanted “lock her up” at the first mention of Hillary Clinton. Most, if not all, of Trump’s rallies feature wild, motivated crowds waiting for the President to unleash on his opponents.

Jonathon Green, a slang lexicographer and author of several dictionaries of slang, noted that a vocabulary of vilification has arisen in the aftermath of Trump and Brexit. Heated political debate, mixed with low attention spans and social media, leaves politicians grasping for a sweet sound bite, amplifying Green’s“vocabulary of vilification.” At her 2016 LGBT for Hillary fundraiser, presidential candidate Hillary Clinton referred to half of Donald Trump’s supporters as a “basket of deplorables,” while Trump referred to Clinton as a “nasty woman” in the final presidential debate. These biting, terse remarks deepen the political divide while maintaining the public’s attention, speaking to the power of pointed language.

Jon Favreau, a former speechwriter for Obama, summarized today’s decline in political discourse perfectly, stating that “a leaders’ job isn’t to educate the public — it’s to inspire and persuade them. That requires meeting people where they are, and speaking in words that are easily accessible to the broadest possible audience.” Donald Trump has mastered doing exactly that. Since his election, Trump has held more than 40 rallies across the United States. His Twitter account, while controversial, has acted as a direct line of communication between him and his supporters; currently, 55 million people follow the President. So who are these 55 million people, and what is it that they see in him and in his demeaning rhetoric?

In an interview with CBS, a Trump supporter summarized the sentiment of the President’s base, “They [Trump supporters] see a person that actually stands for what they’ve been thinking in their head but were too afraid to say all the [sic] years.” In Trump, supporters see a long-sought voice calling out the two-party establishment and the political system. Donald Trump is the voice that, while crass, speaks for the perceived silent majority like no other politician of late has.

Trump supporters adopted the identity of a silent majority in response to what they saw as an increasingly left-leaning media. To them, the mainstream media has acted to suppress their voice. Pundits are quick to cover the major metropolitan centers, be it New York City or Washington D.C., with viewers ultimately recognizing a lack of attention to middle America, to the south and its intricacies, where many of these viewers hail. Trump supporters, such as those interviewed by CBS, argue that when the media does shed light on them as individuals, often the camera is on the most vocal and shocking of the group. Meanwhile, the tamer average citizens are left in the dark despite their significant presence at the voting booths.

After all, across rural areas, Trump won anywhere from 60.5 percent to 70.6 percent of the vote. Several of the key states that swung the election in Trump’s favor, such as Iowa, West Virginia, Pennsylvania, and Wisconsin, had substantial shares of voters in rural areas. Katherine Cramer, a political science professor at the University of Wisconsin, noted, “There’s this sense that people in those communities are not getting their fair share compared to people in the cities.” Said people have felt left behind by economic shifts, finding that a decline in their resources and prosperity can be traced to the declining attention modern politics and government has provided them. Donald Trump posed an alternative option—one that doesn’t exclude this silent majority but accepts them while rejecting the status quo policies offered by the establishment. President Trump’s turbulent behavior and may present an uncertain future for this silent majority; nevertheless, it is a future they’ve longed to see. It is a future that includes them.

The Danger of Fighting Fire with Fire

In an op-ed for the Washington Post, Marc A. Thiessen declared, “Those who call Republicans Nazis and terrorists, and call Trump supporters ‘deplorables’ who ‘didn’t like black people getting rights’ are just as guilty of feeding this climate of hate as those who call journalists the ‘enemy of the people.’” Given the power of language in politics, in the face of widespread populism, can anti-Trump supporters be held responsible for the Republican Party’s gravitation towards the further right? The many people who share Thiessen’s sentiments say yes.

Chances are, your greatest extent in political participation, aside from voting, is engaging in public discourse. With the rise of provoking figures such as Donald Trump and Alex Jones, it is difficult not to. And more often than not, words like “deplorable” and “snowflake” will pop up in such discourse. While they may seem at best, harmless entertainment and at worst, an attack on character, they are not without impact.

In 1910, President Teddy Roosevelt stated, “In a republic to be successful we must learn to combine intensity of conviction with a broad tolerance of difference of conviction.” The sentiment rings true today. With prominent legislation leaving issues like health care and job stability at stake, Americans are taking increasingly polarized positions in their search for a solution. The intensified passion leaves little to no room for civility. The focus unintentionally shifts from the issue at hand to the reaction towards approaches to the issue. With that, I implore you to go beyond the easy route of such ad hominem attacks. While Americans need not condemn the valid passion that underlies these attacks, they must eventually transform it into significant progress. If not, we as a country put at risk one of the guiding principles of American Democracy: civil political discourse.