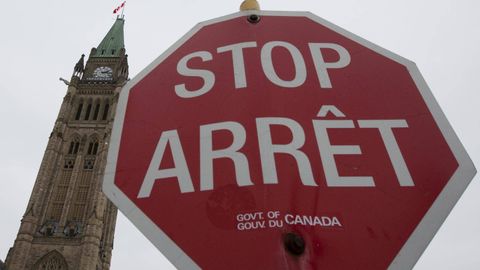 Canada as a “Bi”lingual State

Canada’s debate on the need to be bilingual predates the country’s independence. The last time that Canada’s bilingual duality was not a controversy was when English settlers were just crossing the Appalachian mountains and fur trapping was among the most lucrative businesses. When Europe colonized North America, the French occupied the area that is now Quebec while the British colonized to the east and eventually the west of Canada. This naturally set a linguistic divide in Canada as Quebec speaks French and the rest of the country speaks English. But, it also set an antagonizing cultural divide between Quebec and the rest of Canada where language is used as a tool to deteriorate democratic values for the benefits of Quebec and at the expense of other Canadians.

One of the most important events in Canadian history was the first election of Pierre Elliott Trudeau in 1968 because he took steps to strengthen French influence in the country and limit nationalist fervor in Quebec. In the years surrounding the election, tensions within Canada had been boiling over and the FLQ (Front de Libération du Québec), a Québécois separatist movement, began a deadly terrorist campaign in Canada (Smith). They kidnapped high profile public officials and made independence demands. In an effort to quell the tensions, Québécois PM Trudeau passed both the Official Languages Act (OLA), a bill defining both English and French as official languages of Canada, and the Multiculturalism Policy in the House of Commons on October 8, 1971, which reaffirmed French importance in the history of Canada. These policies had the cumulative effect of successfully keeping the Canadian union, but at the cost of the democratic influence of non-Québécois Canadians.

The Limits of the OLA

The main way that the OLA limits the democratic influence of non-Québécois Canadians is through exclusionary language requirements. English-French bilingualism is a necessary qualification for many government jobs despite the relatively few Canadians who actually check that box (McCullough). This leads to an uncomfortable reality where a linguistic minority holds a disproportionate amount of power within the government. Moreover, Quebecois are much more likely to be bilingual than anglophone Canadians (Lepage) meaning that the OLA and corresponding language requirements concentrate power into the hands of the single province that is most unlikely to represent the interests of the vast majority of Canada. As proof of this concentration notice that five of the last seven Canadian PM’s have had strong ties to the French province. Currently, the bilingualism requirements are serving as roadblocks to political representation for far too many Canadians.

Multiculturalism and What it Means to be Canadian

Another key policy in the formalization of the bilingual state in Canada is Pierre Elliott Trudeau’s Multiculturalism Policy in the House of Commons on October 8, 1971, an exclusionary policy that further subordinates native peoples in Canada. Professor Eve Haque states, “Trudeau explicitly coupled the Multiculturalism Policy with the Official Languages Act of 1969 to declare that Canada was ‘multicultural within a bilingual framework’” (Haque, Eve. Multiculturalism within a Bilingual Framework: A Retrospective. Canadian Ethnic Studies, 2014). This policy was implemented to minimize the tensions between English-Canada and French-Canada, but it did so by marginalizing other Canadians. The basis of the former PM’s claim is that Canada is a country born out of two founding races, the French and the English, and therefore they should have a special status in the nation. However, this myth ignores the history surrounding the European colonization of North America and the subjugation of the native peoples. The Multiculturalism Policy places extra emphasis on French and English cultures by demarcating them as special because of linguistic contributions to the official languages of Canada while lumping all other ethnic or linguistic minorities together as part of Canada’s larger multicultural environment. This policy fortifies the idea that non-French or non-English people are less Canadian which diminishes their power within Canadian democracy as it becomes increasingly difficult for minorities to relate to a “more Canadian” electorate. The policies born out the tensions in Quebec lead to new francophone inclusion and then to the exclusionary redefinition of what it means to be Canadian: English, French or other.

The need to recognize and distribute power to linguistic minorities has been made very clear throughout Canadian history by the FLQ. Thus, modern Canada is faced with the challenge of designing its society to limit the power of linguistic majorities while also respecting the needs of minorities beyond just the large French minority. To do this, Canada must build a welcoming environment in both its public offices and public spaces. In regards to the former, mandating language proficiencies for public officials only reinforces the French-English duality. Instead, in an effort to be more inclusive, Canada should abandon such requirements and rely on the electorate to choose candidates who they believe will best represent them. Based on a 2011 Nielsen Survey, that person will support bilingualism as the survey “found that 88% of Canadians support bilingualism” (Enos). This method would better meet the inclusivity goals of bilingualism as each Canadian voter would have the freedom to define bilingualism themselves. For instance, someone who lives in Toronto may want someone with stronger Chinese influences than French ones because Chinese bilingualism may be more relevant to their lives. Similarly, public spaces must be used to redefine what it means to be Canadian beyond just French or English. For example, school curriculum should teach about the fallacious justification behind the Multiculturalism Policy. This would serve to dispel the national myth of a Canadian dichotomy between England and France and to create a new national identity free from English and French exceptionalism and inclusive of the diversity in Canada. Because

of Canada’s unique history and linguistically diverse populace, the nation must take measures to increase social inclusion in the public arena to grow a better, more equitable, democracy.