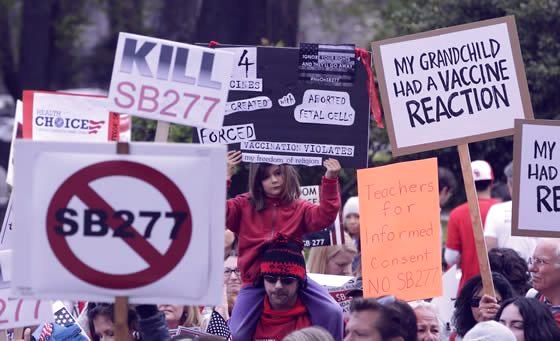 In July 2016, SB 277 became effective across California, requiring the vaccination of schoolchildren regardless of both religious and philosophical objections from parents. Mississippi and West Virginia are the only other states to have passed similar legislation. SB 277 was largely a political response to a 2014 measles outbreak in Disneyland, which devastated over a hundred unvaccinated park attendees of various ages. According to a later Center for Disease Control report on the incident, the outbreak originated in an unvaccinated patient zero visiting the park, before spreading rapidly among other vulnerable guests exposed to the virus and ultimately leaving 110 people compromised by the disease.

The 2014 measles scare alerted the California public to the danger of widespread infections, not only in theme parks but in schools as well. The CDC warned, in the same report that identified patient zero as the source, that unvaccinated exposure to measles results in a 90 percent chance of infection (infection is almost certain in children) while vaccinations reduce the risk to just 3 percent. Parents became concerned over the risks facing their children in the classroom; after all, if 18 children nearly died from the Disneyland contagion, could the same happen to their child at school?

Unfortunately, yes. However, public health policy such as the implementation of SB 277 has reduced the outbreak risk among schoolchildren considerably. The average rate of vaccinated schoolchildren statewide is around 95 percent in 2018, which is a 5 percent increase from 2014, and a testament to the efficacy of mandatory vaccination laws. Although SB 277 has significantly boosted public health in schools statewide, there still remain regional holdouts. In some areas of the state, schools demonstrate vaccination rates that are nowhere near safe levels, especially for the children that attend them. Many of these schools are in the same, more rural and conservative areas of California that initially opposed SB 277 in 2016, and that further attempted a repeal of the law on the November ballot later that same year.

Sonoma County is the most egregious offender of California’s mandatory vaccination law. Sebastopol Independent Charter had a 2018 vaccination rate of only 42 percent, while Sunridge Charter and Live Oak Charter had 49 percent and 57 percent rates respectively. Mendocino, Santa Cruz, Humboldt, San Diego, and Nevada counties additionally contain at least one school with a vaccination rate lower than 66 percent. In total, over a hundred schools statewide do not achieve even a 90 percent vaccination among their population. The amount of unvaccinated children at such schools is especially concerning given that the CDC advocates for a minimum vaccination rate of 95% to consistently prevent outbreaks in a given population.Yet this public health benchmark seems like a pipe dream for the aforementioned schools with their alarmingly low vaccination rates, even with SB 277 in effect.

Troublingly, the horrendously low compliance rate of some schools is almost entirely attributable to defiant parents that legally avoid vaccinations using medical exemptions. Vaccine exemptions are a medical necessity for around 3 percent of the population, mostly due to rare allergies; however, as pediatrician and University of Pennsylvania professor Dr. Paul Offit claims, the ludicrous exemption rates in some California schools indicate “bogus medical exemptions” and he further added that “it’s unconscionable… suddenly 25% of children can’t get vaccines? Really? It doesn’t make any sense.” Offit also notes that “doctors are willing to give” such exemptions because they, like many parents in certain skeptical communities statewide, oppose mandatory vaccination. This demonstrates the fatal flaw with SB 277: it does not account for such a rampant abuse of vaccine exemptions and leaves the doctors involved entirely without regulation or oversight. Anti-vaccination parents and doctors are capitalizing on this legislative loophole in many counties, resulting in a 400 percent spike in exemptions statewide since 2016 alongside the ridiculously low vaccination rates in schools within such localities.

Parents and doctors within these rural, conservative regions oppose mandatory vaccinations for two main reasons. A minority do so because of pseudoscientific concerns over vaccines themselves. Against medical consensus, these critics argue that vaccines are ineffective, accelerate infection in the body, or even cause a range of developmental disorders in children. The small number of parents and the even smaller number of doctors who erroneously support these claims collaborate within sympathetic localities to secure exemptions for schoolchildren. Once anti-vaccine parents find like-minded doctors, they often refer other parents in the community, leading to potentially dozens of children attending the same school with fraudulent exemptions given by the same doctor.

A majority of mandatory vaccine detractors, however, do not subscribe to such beliefs. They instead simply feel that SB 277 abridges the rights of parents and disturbingly shifts parental authority over vaccinations to the state. There are certainly issues over which the boundaries of individuals and governments should come into question, but vaccinating children is not one of them. Parents who refuse to comply with SB 277 for whatever reason recklessly threaten the mental and physical health of their children and those of others, prioritizing their own beliefs over the scientifically evident safety needs of their larger communities. The focus of vaccination law should be on those most affected, and no age group is more vulnerable to disease than children, particularly in densely packed classroom settings. Mandatory vaccination is beneficial to everyone and most importantly, it has made remarkable progress toward its goal of increasing the health and safety of California schoolchildren.

The legislative problem of exemptions that SB 277 failed to address is gaping and requires an immediate amendment to curtail the rampant abuse of medical exemptions. State Sen. Richard Pan (D-Sacramento), an original proponent of SB 277, has called for exactly that. “If we continue to see abuses” of medical exemptions, he claims, “then I think there should be some thought as to how to address it.” No coherent plan for closing the loophole has presented itself thus far, but Pan has publicly stressed the relevance of the issue, insisting that “people need to realize this is about the safety of their kids.”

If exemption abuses persist, California schoolchildren will feel the consequences in the form of negligible immunity to some of the most dangerous contagions affecting their age group. Most diseases could spread quickly within the confines of classrooms and devastate the underdeveloped immune systems of unvaccinated children. Not only is disease transmission easier among children, but the ill effects are more violent and longer lasting. Severe infections such as whooping cough and scarlet fever infect unprotected children easily, and in severe cases permanently diminish physical ability and even cognitive function. Furthermore, the rural communities that are most likely to experience epidemics due to their ideological objections to vaccinations are also the least likely to combat them effectively, as there is a general concentration of developed hospitals in larger cities. These facilities attract advanced medical technology, supplies, and research, along with experienced doctors and staff, away from potential infection hotspots in rural areas.

A sensible amendment to SB 277 would mirror West Virginia’s mandatory vaccination law, which subjects potential medical exemptions to review by the State Public Health Department. This ensures that only children who need them receive exemptions, and allows doctors who carelessly exempt children to undergo prosecution. Under SB 277, doctors are not only unsupervised when giving exemptions, but are difficult to prosecute for malpractice since little proof exists for each case. Additionally, anti-vaccine parents are likely to defend such malpractice to protect their source of fraudulent exemptions, complicating prosecution cases.

An example of this phenomenon is the case of pediatrician Bob Sears, who was prosecuted for exempting a toddler from vaccination without medical reason. The Medical Board of California sentenced Sears to professional probation for the next three years, vaccination safety training for 40 hours, and enrollment in medical professionalism and ethics courses. He can currently only practice medicine under a board-supervised doctor. Sears was and is a vehement critic of SB 277 and has published misleading information on vaccines throughout his career. His private practice in Capistrano Beach previously advertised itself as practicing ‘alternative vaccination’ methods and attracted a devoted following of anti-vaccine parents, who lament his prosecution by the medical community.

Legally requiring government oversight of medical exemptions will increase vaccination rates in schools, especially in vulnerable counties where a lack of regulation causes anti-vaccine doctors to thrive. Ideally, proper oversight will either correct the blatant malpractice of such doctors or strip particularly defiant ones of their license to practice. Both of these penal measures will remove the source of fraudulent exemptions from anti-vaccine communities and help secure the health and safety of all California schoolchildren.