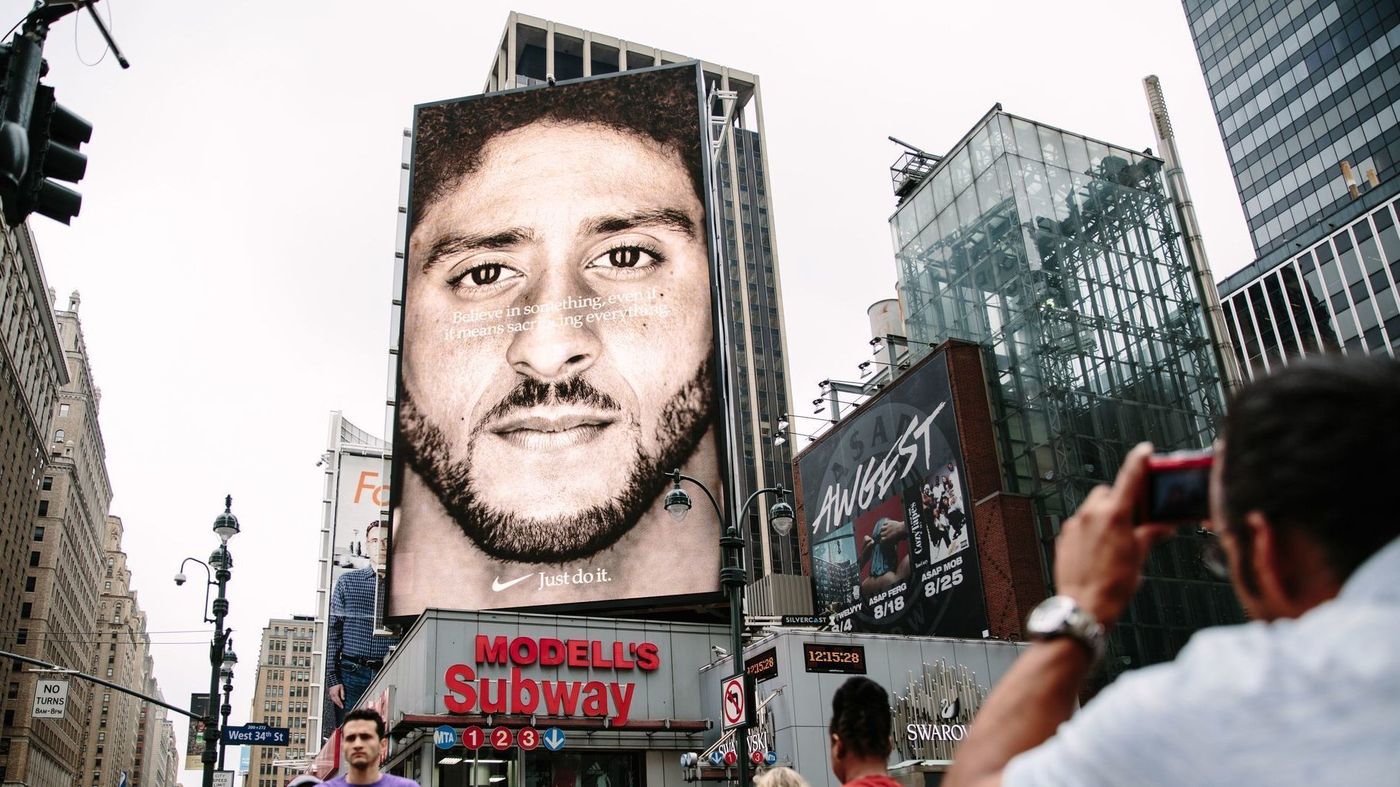 The Commodification of Activism

When Nike revealed Colin Kaepernick, the former 49ers quarterback, to be the face of their new “Dream Crazy” marketing campaign, they drew a myriad of responses. Some took to social media to express their disbelief by burning all of their Nike gear, while others applauded the company for openly endorsing Kaepernick and his message. President Trump himself took to Twitter to tweet, “Just like the NFL, whose ratings have gone WAY DOWN, Nike is getting absolutely killed with anger and boycotts.” On the surface, Nike’s campaign is attracting a lot of attention because it reignites debate surrounding Kaepernick’s protests during his time in the NFL. But the most important scandal of Nike’s mistake lies in the way in which Nike is exploiting activism as a means to make a profit by endorsing influential activists, specifically Black activists. This is the commodification of activism, and it is quintessentially problematic.

Nike saw its opportunity to tap into the hype of Kaepernick for profit, and they ran with it. As Dexter Thomas of Vice News accurately puts it, “this whole ad campaign might seem like a pretty big risk. But actually, Nike is making the smartest bet that you can make in the fashion and culture industry: it’s betting on Black.” Kaepernick not only represents defiance, freedom of speech, and justice, he represents Black culture and Black struggle. To put it more bluntly, with a platform that reaches beyond a football stadium and a cause that goes deeper than sports, Nike strategically bet on Kaepernick. The founder of Deep Focus, Ian Schafer, comments, “They’ve now come to the realization that the people who wear their products, namely and certainly athletes and skateboarders, are also urban artists. They are civil rights icons… They are lots of people who contribute positively and really shape culture.” Kaepernick is someone who, as the Nike ad says, has sacrificed his professional career, and has put himself on the line in the face of racial oppression. He broadly represents a movement dedicated to highlighting injustices people of color face at the hands of police officers. As an athlete and civil rights activist, Kaepernick is the perfect marriage of both sports and advocacy.

Regardless of whether you agree with Nike’s endorsement of Kaepernick, Nike’s move to do so is smart business. According to Bloomberg, the campaign alone, not including money accumulated from sales, generated $43 million worth of media exposure 24 hours after its release. Moreover, the movement he more broadly represents is also benefiting from the campaign. It is almost impossible to disassociate Kaepernick from Black Lives Matter. So by the transitive property, Black Lives Matter is also gaining free media exposure. There’s no such thing as bad press.

Nike’s endorsement, more candidly, places Black Lives Matter at the forefront of our lives. Additionally, Nike’s endorsement of Kaepernick may encourage other businesses to get involved and invest in movements worthy of support. Amazon Smile, for example, though not a direct result of Kaepernick’s campaign, donates 0.5% of the price of eligible AmazonSmile purchases to a charitable organization of the consumer’s choice. Foundations like the World Wide Fund for Nature and Susan G. Komen gain financial support and exposure from the direct involvement of big businesses like Amazon. Now that Nike has cemented this new approach to business, and has seen impressive financial outcomes, more businesses will follow suit.

However, the hyper-exploitation and essential commodification of Kaepernick, a result of Nike’s “Dream Crazy” campaign, fundamentally misleads consumers into coupling activism with Nike’s products. The very meaning of Kaepernick’s message is reduced to a commercial good and is lost in a sea of commerce. The significance of the movement is now equatable to a pair of sneakers. “Believe in something. Even if it means sacrificing everything. #JustDoIt” tweeted Kaepernick. Billboards with the same quote can be seen across America, especially in hubs of bright advertisement like shopping malls and Times Square. Kaepernick did sacrifice a lot. He sacrificed his career in the NFL and faced professional ridicule to peacefully protest racial injustices. That he is the person Nike chose as the face of their ad is what proves the ad to be such a gross commodification of Black activism. At the expense of Kaepernick’s ideology, Nike is exploiting Kaepernick and misleading consumers into tying very meaningful human experiences of oppression to mere products. Kaepernick, in a twisted way, is now the product.

Beyond Kaepernick, Black Lives Matter, the movement Kaepernick more broadly represents, is also reduced in significance. Nike’s campaign minimizes the experiences of everyone for whom Kaepernick’s original message was trying to raise awareness. By extension, activist sentiment toward the broader movement, not just Kaepernick’s own ideology, is also being tied to a tangible product. The very reduction of human experiences, and of activism motivated by systemic oppression, to a commodity further lessens the movement’s validity. The core of the movement shifts from grassroots organization to mainstream capitalist consumption. It is no longer a product of the people, it is Nike. It is a sports bra. Alicia Garza, a civil rights activist and foundational organizer of Black Lives Matter, is being robbed of her voice and her leadership as she’s overshadowed by Nike. Nike, in the most consumer mainstream of ways, is now Black Lives Matter and Black Lives Matter is now Nike.

Rather than making a legitimate call for change, Nike’s implicit “support” of Black Lives Matter, the movement at large, has turned something very real and personal into sellable symbolism. The tangible struggle of Black people is now symbolic. H&M similarly outsold everyone on the commodification of activism, of LGBTQ+ struggle, in their first ever 2018 Pride campaign and collection, “Pride Out Loud.” The clothing line included shirts embezzled with positive, pro-LGBTQ+ quotes, sweatpants with rainbow lining, and accessories with variant rainbow patterns. However, some of the items from the line were made in countries where being gay is illegal. Though progressive and pro-LGBTQ+ on the surface, at its very core, ideologically and quite literally, H&M’s endorsement of Pride, like Nike’s endorsement of Kaepernick, shows the ways in which corporate sponsorships of activism are harmful and ungenuine.