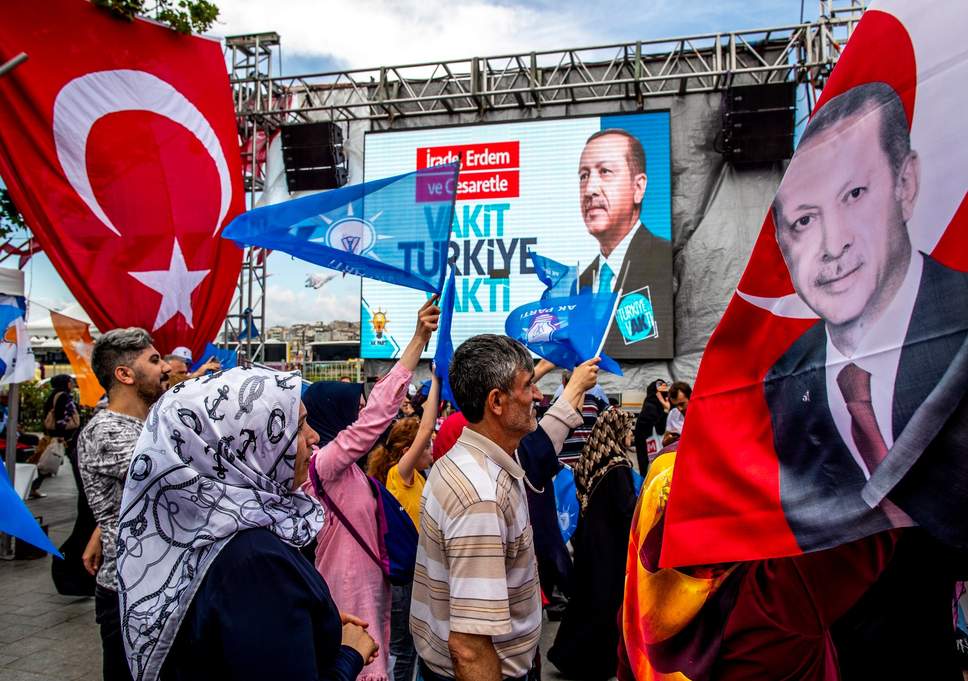 Turkey: Where Do We Go From Here?

On June 24, 2018, incumbent Turkish President Recep Tayyip Erdogan, despite what nearly every polling statistic said, won the election, reestablishing himself as the nation’s authoritative figure. Erdogan, a socially conservative yet economically liberal leader, had had a turbulent first term in office, including a coup attempt from the Turkey Armed Forces, a shut-down of the country’s press, accusations of his government supporting ISIS, and deteriorating relations with the United States. It seemed fitting for a new, innovative leader to take charge and move the nation in a different direction, but with Erdogan in charge, it seems as if the political climate will remain unchanged. Turkey’s current state will clearly influence Turkey’s relationship with the Middle East, the United States, and NATO.

The concept of the state of “Turkey” has not been around for long; in fact, the Ottoman Empire was only dissolved in 1922, following World War I. Being a new state, Turkey had a difficult time establishing its position in the world. Although geographically situated at one of the most important meeting points in the world (Asia and Europe) Turkey was primarily used as a pawn by larger powers, particularly in the Cold War. The West recognized Turkey’s strategic location as an area to build up their defense on the southeastern side of Europe. Inconveniently at the same time, Turkey faced immense internal issues, including oppressed ethnic militias attempting to fight for independence, such as the Kurdistan Workers’ Party (PKK). The government’s cries for help went unanswered, and their apparent irrelevant position at the global stage remained. In the early 1990s, President Turgut Ozal set about to change Turkey’s image, hoping that the public support of the United States would be beneficial to future Turkish security issues. This included support in the Gulf War, implementing a no-fly zone over northern Iraq, and establishing the U.S. Incirlik Air Base in Turkey. Some of these initiatives came back to bite Turkey in the future; the no-fly zone, for example, aided the formation of a separate Kurdish state, which gave the Kurds a strategic home base to attack Turkey. Although some of the U.S.’ decisions (such as above) have harmed Turkey, the core idea of maintaining ties with Turkey has survived.

The problems that the PKK caused the Turkish government by attempting to break away as a separate Kurdistan state were never forgotten. Multiple insurgencies throughout the late 1900s led to an eventual ceasefire between the PKK and Turkey, but the PKK would later be used by the United States for a different reason: they were hired by the US to fight ISIS. Turkey was upset about this decision, and this has led to controversy over the United States’ decision itself to utilize the PKK.

The attempted military coup in 2016 has caused controversy, too. The apparent leader of the coup, Fethullah Gulen, has been residing in the U.S. and has not been extradited to Turkey. President Erdogan has specifically cited this as a conflict area. Pastor Andrew Brunson, an American who has been arrested in connection with terrorism charges, was not released until recently, despite urgent demands from the U.S. government. This has led to sanctions being imposed on Turkish Interior Minister Soylu and Justice Minister Gul.

The Turkish government recently attempted to purchase at least 100 F-35 Joint Strike Fighters, a “common” defensive move. They have also bought a Russian defensive system, known as the Triumf S-400, which has frightened the U.S. and NATO about a potential Turkish-Russian alliance. The U.S. did its best to block this sale of fighter jets to the Turkish government, but could not completely succeed. Turkish relations with Russia have not always been this friendly. Just three years ago, a Russian combat aircraft was shot down by a Turkish aircraft near the Turkish-Syrian border, which led to a lull in relations between the two nations. But the rise of Erdogan’s authoritarianism and Turkey’s policy toward the Kurds has led to increased hostility between Turkey and the European Union, even leading to Turkey questioning their membership in the EU. Due to this, they are the perfect candidate for a Russian alliance in southwestern Asia.

Turkey has taken advantage of the United States for many years. They are now holding our wonderful Christian Pastor, who I must now ask to represent our Country as a great patriot hostage. We will pay nothing for the release of an innocent man, but we are cutting back on Turkey!

As we can see, Turkey’s relationship with the U.S. and NATO has and can go in two directions from here. The first direction would involve understanding decisions from the governments’ points of views, and tweaking some foreign policy decisions. The second direction is continued hostility, which involves not resolving the current issues. The obvious issue with continued hostility is a series of implications that can affect the U.S. and NATO.

The first direction would force an investigation into Turkey’s recent purchase of F-35 fighter jets and the Triumf S-400 defense system. In order to understand Erdogan’s position on the relationship with the United States, NATO, and Russia, we must understand what exactly Turkey plans to do with these purchases. The concern is that the F-35’s will be turned over to the Russian government, which may help to beef up their own weapon arsenal. If Erdogan plans to work with Russia, the entire alliance that Turkey has built with the West may crumble. In order to fix the extradition issue, a fair and thorough investigation about the military coup must take place. There is a decent amount of evidence to accuse Gulen of leading the coup, but much of it is based on bias. Gulen and Erdogan were politically aligned until 2013, when there was a split due to corruption charges that Gulen brought about. Due to this, Erdogan has sought to extradite Gulen from the U.S. to Turkey on the account of “terrorism charges.” If the United Nations assigns a committee to investigate the entire background and details of the coup, the truth can be seen. The final issue is related to the U.S. operations in the Middle East, with respect to ISIL. One of the ways in which the U.S. aims to take down ISIL is through “middleman” military operations, in which a group like the PKK is deployed to attack. To ease Turkey’s concerns about funding the PKK with weapons would be difficult since the Syrian Democratic Forces (SDF) mostly consists of Kurdish militia.

Continued hostility can take a very unpredictable course. If the present issues persist, we may see increased conflict between Kurdish forces and the Turkish army in the Middle East. This has a direct effect on the military budget of the United States: why would we spend money on deploying Kurdish forces if an “ally” is terminating them? This would create a high amount of inefficiency in our government’s spending. The economic effects can be mitigated to a certain extent; what cannot be mitigated as well as the core diplomatic relations between our nations. A strained relationship between Turkey and the US would clearly develop. Just recently, in August, President Trump announced he would double the rate of tariffs on aluminum and steel imports from Turkey. This is potentially just the beginning of an era that could be filled with more tariffs and even a lack of military intelligence sharing.

Losing an ally in such a strategic location would obviously be detrimental to the U.S., and change must be made. The U.S. must strive to improve diplomatic relations with Turkey before the situation completely spirals out of control.