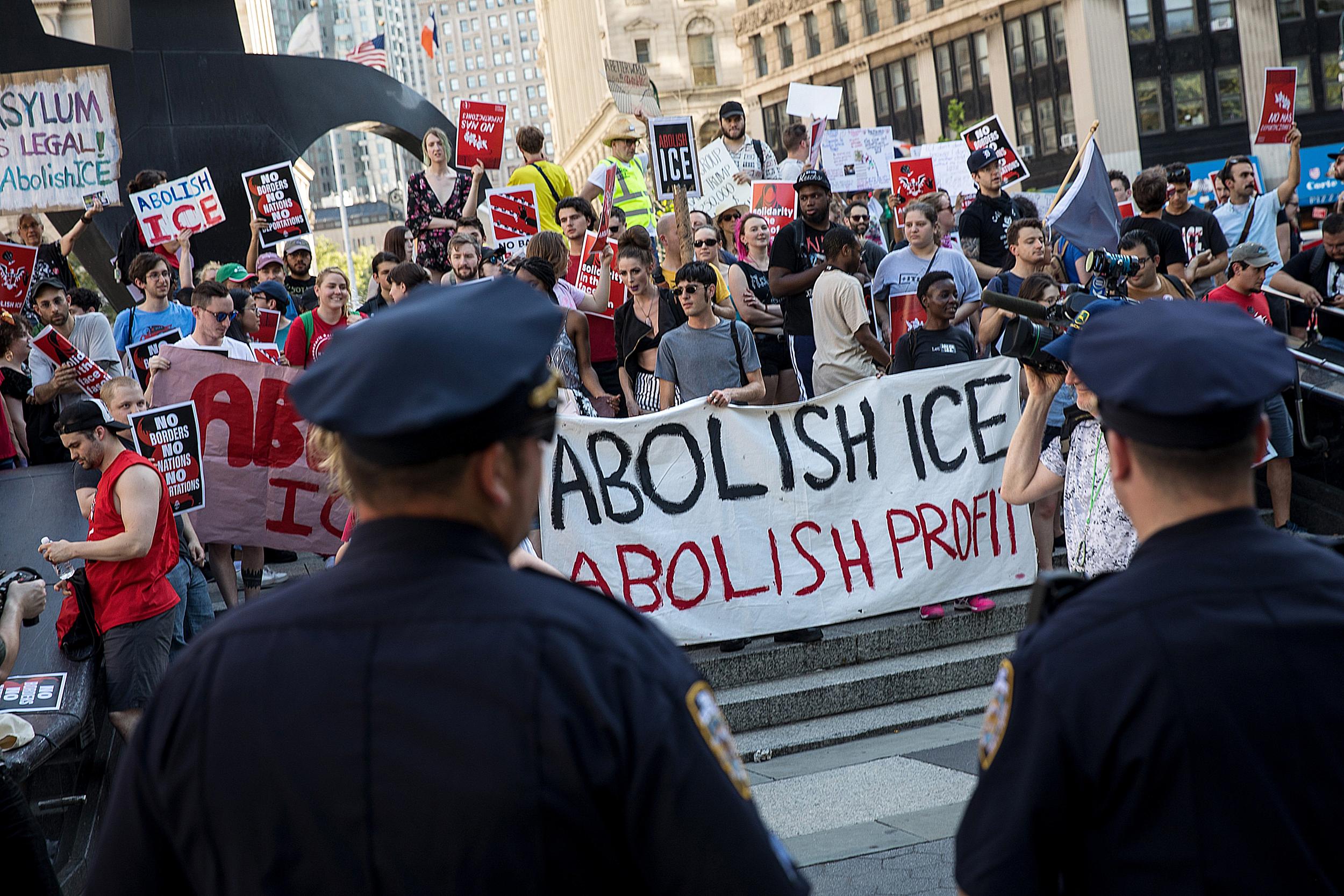 Will ICE Freeze the Blue Wave?

On March 1st, the U.S. Immigration and Customs Enforcement (ICE) announced that operations in their Northern-Central California jurisdiction have resulted in 232 arrests for violations of federal immigration law. 117 of these offenders were “non-criminals” innocent of any offense unrelated to immigration. A few months later, a three-day criminal sweep mostly centered on immigration violators in Los Angeles County netted 162 arrests. News of these raids coincides with ICE’s increasing compliance with the Trump Administration’s controversial policy of separating children from parents detained at the border, leaving many left-leaning Americans with a suspicious or overtly hostile attitude toward the agency’s actions.

ICE’s conduct especially impacts California, the most racially diverse and immigrant-populated state in America, where public opinion on ICE is as passionate as it is varied. As President Trump enforces his party’s border security agenda nationwide, California Democrats rally to defend the state’s immigrant population from federal investigation and possibly deportation. Ideological tensions between the state and federal governments are rising exponentially, with California Attorney General Xavier Becerra suing the Trump Administration nine times over immigration issues and Trump responding with threats to cut state funds on everything from the National Guard to public schools.

Representatives and Congressional candidates in the state are increasingly taking notice of ICE’s growing prominence as a crucial social issue among constituents, leading many, especially those representing deeply liberal districts, to call for the abolition of ICE. Around a dozen incumbent Democrats endorse this position, though as Democratic House contender Katie Hill highlights, they all represent “progressive districts that would never ever vote for a Republican in a million years.”

Support for ICE’s abolition, even among a few outspoken Democratic politicians, is not only unproductive but damaging to the party’s midterm election prospects. Although most registered Democrats support the reform, restructuring, or defunding of ICE, less than a quarter want the agency disbanded altogether. Even within the party, anti-ICE sentiment is not strong enough either among the California populace or state representatives to realistically achieve political results. Furthermore, over half of American independents and a significant 34% of Democrats support ICE, indicating that voters within these key demographics more likely to distance themselves from the nascent ‘Abolish ICE’ movement than they are to get involved.

How the national Democratic Party tackles its stance on ICE will be a deciding factor in this year’s midterm elections. Nowhere is the issue more pronounced than in California, where the party hopes to retake ten House seats overall and establish a legislative majority. None of the contenders for these ten Californian seats, varying from traditionally deep red to shades of purple, support the abolition of ICE — and for good reason. Hill, running in a swing district near Los Angeles, comments that the ICE fervor within the party “isn’t healthy” and that “If we’re focused on the talk about abolishing ICE, then we’re missing the point… our focus needs to be getting Democrats in Congress, passing immigration reform, and passing a pathway to citizenship.”

Hill recognizes the fact that most Californians are not in agreement with more liberal Democrats when it comes to ICE. Especially in split districts like hers, moderate desires to reform or restructure immigration agencies and policy are far more appealing than calls for ICE’s disbandment. Many Californians in both parties feel that ICE is misled or overactive but value its dedication to removing foreign criminality from the state.  Central California Democrat TJ Cox frowns upon what he sees as the federal mismanagement of ICE and a rebranding of its mission from anti-terrorist to anti-immigrant purposes. He opposes abolishing the agency, however, out of sympathy for “the hardworking and honorable men and women that work for ICE [and] are put in a very untenable position” because of their occupation’s virulent politicization.

Moderate Democrats and independents also harbor concerns over border security. With ICE out of the picture, some worry that foreigners with lengthy criminal records will have a much easier time establishing themselves in cities statewide. Reflecting this concern, Mike Levin, running in northern San Diego County claims that “our country needs immigration enforcement” but referring to the Trump administration’s family separation policy, adds that “ICE should not be subject to the whims of the executive branch, and should administer our nation’s immigration laws in a humane manner.” The blatant fissure between devoutly liberal and more moderate Democrats over ICE policy may lead to a disastrous fracture in the Democratic Party’s public support in the final stretch of election season.

While the Democratic voter base is torn over immigration issues, California Democratic representatives face an identity crisis. Some ideological Democrats from more progressive districts want to steer the party toward an official ICE abolition agenda in time for the midterms or at least the 2020 presidential election, while many mainstream members are vehemently opposing this action in an attempt to preserve the party’s reputation among less progressive voters. The latter view correctly observes that pressing the ICE issue too heavily may draw moderate voters away from liberal contenders and defeat the party’s chances of retaking the House, perhaps for years to come. Extreme anti-ICE rhetoric not only alienates more moderate party members, but it also undermines party cohesion, reducing the potential for meaningful immigration reform even if Democrats sweep the midterms.

Another reason for Democratic politicians to let the ICE fever subside is the political influence of the state Republican Party and the conservative voter base. 79% of Republicans consistently approve of ICE, and, compared to the many shades of support and opposition shown by Democrats, they have a much easier time translating public opinion into political action. The state Republican Party has been feverishly galvanizing their uniform voter base by exaggerating Democratic support for ICE’s abolition and stoking conservative fears of an unsecured border in an effort to increase voter turnout in their favor.

Conservative political attacks are focusing on the Democratic Party’s weakness in addressing the ICE problem and its inability to stem the disbandment movement within its ranks. President Trump himself has criticized the movement, prompting conservative organizations in states like Arizona, New York, Texas and now California, to release ads urging Republicans to vote against ‘extremist’ Democrats in their respective midterms. The unified Republican response to anti-ICE rhetoric from certain Democrats is a fatal warning to the party not to pursue the ICE issue further, especially since conservative attacks resonate not only with their traditional voter base but also with independents and moderate Democrats.

Republican criticisms of the abolish ICE movement are broad enough that they appeal to more bipartisan voters in addition to staunch conservatives. As an example of their success, many conservative advertisements have focused on the ideological distancing of the Democratic Party, particularly in California, from constituent interests in moderate districts. Advertisements such as these exploit longstanding fears among U.S. citizens that the Democratic Party has abandoned its support base in moderate districts to concentrate on the interests of deeply progressive regions of the state. The resulting sense of political disillusionment could lead traditional Democrats and swing voters away from the party and toward seemingly more sensible conservative perspectives on immigration policy.

Spurred on by Trump and conservative efforts nationwide, California Republicans will likely capitalize on the statewide ICE debate as much as possible in the next few months in order to pressure Democrats into declaring their position on abolition. If Democrats allow the abolition movement to define their party, they are both painting themselves as ideologically extreme and creating fault lines between their more moderate and liberal members. And as Trump perhaps said best, Democrats may “never win another election” if they continue to struggle with the abolish ICE movement.