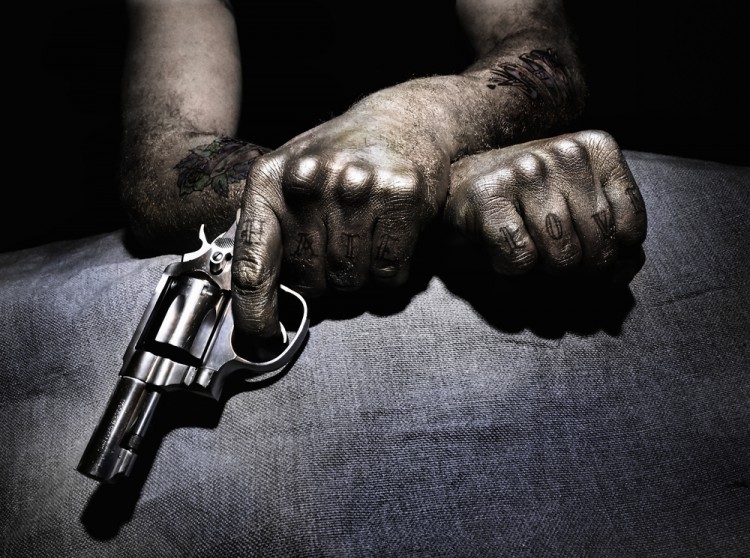 Foreign, ruthless, violent — all of these words have been used by President Donald Trump to characterize the gang MS-13 as a threat to the United States of America. Trump has used incendiary rhetoric to lambast the Obama administration for its immigration policies that “allowed criminals to enter the country” and to push forward his own hardline immigration agenda that, some argue, could actually strengthen MS-13 and other gangs. While MS-13 is a valid threat, President Trump is using them as an example of how large populations of immigrants in America are dangerous, a flawed generalization to make due to the nature of the gang, its presence in America, and its victims — most of whom are immigrants themselves.

MS-13, or Mara Salvatrucha, began in the 1980s with the United States’ involvement in the bloody Salvadoran civil war. The U.S. sided with the ruling military dictatorship over Marxist guerrillas. More than 75,000 Salvadorans fled to the United States, most of whom ended up in Los Angeles. There, they faced persecution and harassment from Barrio 18, or 18th Street, a Mexican gang. What later became MS-13 — a feared international criminal organization known for human trafficking, extortion, and violent murders — began as a way for Salvadoran immigrants to protect themselves and smoke weed together.

The gang remained a small nuisance mostly centered in Los Angeles until President Clinton took office. In 1996, as part of Clinton’s crackdown on crime, the Illegal Immigration Reform and Immigrant Responsibility Act was passed. This act made deportation a punishment applicable to more crimes, including petty theft, drunk driving, and the sale of bootleg DVDs. Over the course of four years, over 20,000 young Salvadoran men were deported to a country with no jobs or law enforcement infrastructure. Former MS-13 members set down roots in El Salvador, Honduras, and Guatemala, strengthening the gang and giving it a home base of sorts. These international connections are what made the Obama adminstration’s Department of the Treasury sanction MS-13 as a “transnational criminal organization” in 2012.

Since then, Mara Salvatrucha has been rising in power and notoriety. In 2015 and 2016, Maryland’s Montgomery County investigated seven murders linked to MS-13, up 700% from the one murder per year previously associated with the gang. It’s clear, some policymakers argue, that the organization is an increasing threat to public safety. But is it actually?

Research on the gang’s activity disagrees. Mara Salvatrucha is only expanding in the parts of the United States with large Central American immigrant populations: Washington D.C., Los Angeles, Montgomery County (MD), and Fairfax County (VA), among others. And the expansion is minimal; the Federal Bureau of Investigation estimates there are only 10,000 members of MS-13 out of a total 1.4 million gang members in the United States. Many other gangs, including the Crips, have many more members in the United States than MS-13, but the president has not drawn any attention to these other groups. Mara Salvatrucha is not centrally organized, as he has claimed, and is only concentrated in certain areas of the country. So while MS-13 is a cause for concern in some parts of the United States, it is nowhere near the organized Central American mafia that Donald Trump describes it as.

A concern for many is that President Trump is exaggerating the problem. J. Thomas Manger, the Chief of Police for Montgomery County, Maryland has stated that while MS-13 is a local public safety threat, it is not a national security concern. Due to the increased financial focus on Mara Salvatrucha, the opioid epidemic, a larger threat, is being swept under the rug. In 2017, over 300 residents of Montgomery County died from opioid overdoses, while only six deaths were linked to MS-13. Funding that goes to stopping the gangs is often pulled from other community funds, including those used to combat local public health problems. The gang, despite its relatively small presence in the U.S., has captured Trump’s imagination and colored his tweets — one of the most notable being a tweet about Virginia’s 2017 gubernatorial election in which he lambasts the Democratic candidate (Ralph Northam) for “fighting for violent MS-13 killer gangs.” This verbal assault on MS-13 is just one of many times the President of the United States has made sweeping, negative generalizations about a minority group.

Xenophobic fearmongering is a strategy that Donald Trump has used since the beginning of his presidential campaign. By lumping Mexican and Central American immigrants together and calling them “rapists, drug dealers, and criminals”, he alienates large sections of society from the majority white population and reinforces his standing with white nationalists and neo-populists. Evangelicals and more moderate Republicans don’t seem to mind too much, as the Republican Party still retains support from its current constituent base: white Christians who remain terrified of immigrants stealing their jobs and culture.

Despite all the xenophobic rhetoric, the problem remains that MS-13 is a homegrown organization. Most of its members are natural-born citizens of the United States, contrary to Donald Trump’s assertion that most are undocumented immigrants. That makes deportation a problem, which it was anyway — research has shown that deportations actually strengthen Mara Salvatrucha and its hold on both American and Salvadoran communities. According to the Congressional Research Service, return deportations have, “effectively transported U.S.-styled gang culture to parts of Central America and Mexico”, which in turn helps send more gang members looking to expand Mara Salvatrucha into the United States.

What may actually help the United States is providing more money for regional anti-gang task forces and ending the radicalizing hate speech that only aids MS-13 in recruitment. The Northern Virginia Gang Task Force used to receive $3 million in annual federal funding. This money was used for soccer tournaments, job programs, anything that would occupy young people’s’ time and keep them from entering the gang world. But in 2012, the Task Force’s budget was reduced to $325,000. After this, violent altercations associated with and murders committed by the gang increased rapidly, peaking at seven in 2017. Given enough resources, local agencies are able to stop the violence. Once they do, however, their funding is rescinded and the gangs are able to reform and recruit with even more ferocity than before, making gang violence a cyclical problem that requires a constant flow of resources. Recognizing that sufficient resources must be allocated consistently to the problem is the first step to combating Mara Salvatrucha in America’s communities. This can be seen in the case of Los Angeles, once the area with the most MS-13 gang activity in the United States. Local leaders invested heavily in a plan of education, social intervention, and mental health care for at-risk teenagers. As a result, the gang’s activity in the region is almost negligible; homicide rates in Hollywood are lower than they have ever been. The LAPD also cites focused understanding of the gang and its functionality as a reason for its continued success in reducing gang violence in the city. Communities need to dedicate continuous resources to stemming the power of MS-13.

Another solution is to integrate immigrants and refugees more into society. This can be done by stemming the flow of Trump’s misguided statements and not giving them any attention. One of the biggest problems with xenophobia is that it tends to alienate and radicalize both sides – the majority natural born/white population and the immigrants/refugees. MS-13 excels because it appeals to one of the lowest segments of American society — young refugees rejected and treated as criminals by a society that is willing to generalize them as violent and hostile. Many of these vulnerable teenagers, most aged 15-17, have fled their homes alone and are looking for a place to call home. Until the United States shows that it can provide that, gangs will continue to thrive. On the flip side, thanks to Trump’s increasing focus on cracking down on undocumented immigrants, the immigrant communities most afflicted by MS-13 are less likely to speak out about it. Many worry that they will be deported if they come forward, a fear that the gang uses to its advantage when extorting small businesses in El Salvadoran immigrant communities.

The United States will have to come find new solutions to its problems. Exporting the violence to poor countries unequipped to deal with it is not an option. More importantly, neither is alienating minority groups to score cheap political points. If President Trump wants to make real change in the United States, he must be willing to have a reasoned, factual response to the violence committed both by and against minorities occurring across the states. The federal government owes it to the people of America to be honest about the threats it faces and address those fairly. Its policy of using MS-13 as a bogeyman is unsustainable and unlikely to aid the Trump administration in the future.