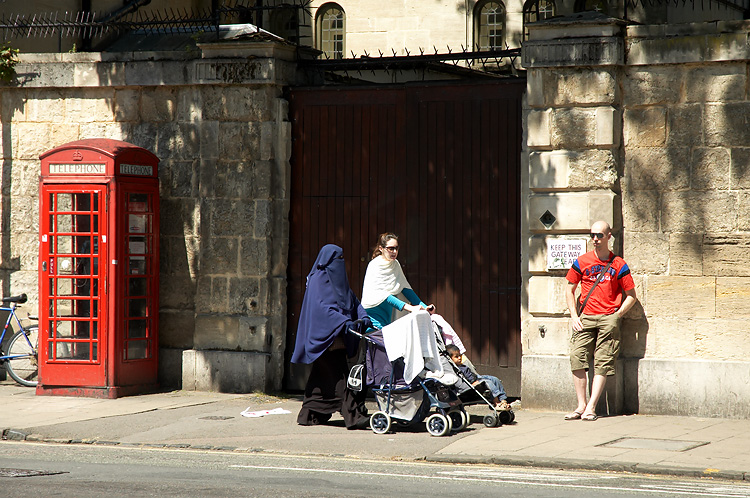 If Denmark is any indication, the conflict between secularism and multiculturalism in Europe is not likely to be settled any time soon. The government of this Nordic country is planning a ban on full-face veils. Denmark’s Justice Minister Søren Pape Poulsen attempted to justify the ban by declaring: “It is incompatible with the values in Danish society and disrespectful to the community to keep one’s face hidden when meeting each other in public spaces.” However, the true purpose of this ban is to target Islamic garb, such as burqas and niqabs. The Danish plan reflects the general European discomfort with Islam and with cultural practices that are seen as degrading to women. The official justifications for such plans should not be taken at face value.

Several other European countries have their own full-face veil bans, and their justifications for these bans are similar to Denmark’s. For instance, the Austrian government has also argued that full-face veils hinder interpersonal interactions. The populations of these countries and their elected officials largely support the ban, and the cultural conformity it imposes.

It is important to note that these bans are often imposed by a centrist party in order to avoid losing ground to the far-right. In Austria, a coalition of the two main centrist parties passed the ban largely in response to the surprising electoral success of a far-right party known as the Freedom Party. Similarly, Germany’s own pragmatist Angela Merkel endorsed a ban on full-face veils just as the far-right AFD rose to prominence. This was almost certainly a calculated move to prevent voters from being drawn over to the far-right, rather than an expression of Merkel’s actual views on the issue, as Merkel’s relatively refugee-friendly policies in the past would seem to indicate that she does not view Islam as incompatible with German values. In France, the first country in Europe to ban full-face veils, the decidedly center-right Nicolas Sarkozy stated that veils were “not welcome” and were oppressive towards women. Sarkozy differs from the Austrian and German examples because he seemingly said this of his own accord, without any pressure from the far-right. This indicates that at least in France, sincere aversion to full-face veils has penetrated even the political center. In each of these cases, it is not some group of fringe radicals curtailing religious expression, but the mainstream centrist parties themselves.

The Danish government has come up with all sorts of justifications for their own full-face veil ban, one of which is Justice Minister Poulson’s aforementioned insinuation that the covering of one’s face is antithetical to Danish culture. There are, of course, loopholes carved into the bill for cold-weather clothing and sports equipment, headwear that the government seems to see as sufficiently in tune with Danish culture. Danes are free to wear these articles of clothing regardless of whether or not they are currently ski-jumping or if it is actually cold outside. If the purpose of the ban was to encourage people to meet with their faces exposed, it would be silly to carve out all these exceptions. Notably, this seems to leave open the possibility of wearing a ski mask in public in order to hide one’s identity for the purposes of committing crimes. From these exceptions, it is quite obvious that this ban is specifically meant to target Muslims rather than ensure openness and easy identification. The Social Democrats, an opposition party, are more explicit with their true motives, stating that burqas oppress women. This is a strange position to hold; the penalty for wearing a full-face veil is thousands of kroner, equivalent to hundreds of U.S. dollars. If burqas oppress women, then fining women is essentially punishing the victim. This would be like enforcing child labor laws by prosecuting the children instead of their employers. If burqas are actually an affront to feminism, then a woman’s husband or father are the ones who ought to be punished. The only way that it makes sense for the government and the opposition to support this ban is if their support is rooted in a general aversion to Islam rather than concern for women’s rights.

The Danish government is certainly no friend of the mixing of religion and public life. In 2008, Denmark banned judges from wearing religious articles such as hijabs and yarmulkes while in court. It is also worth pointing out that Denmark was the source of the original controversy over cartoonists depicting Muhammad back in 2005. In Denmark, secularism is beating out respect for religious pluralism.

It is tempting to see the ban on judges wearing any religious articles as more fair than bans that target only Islamic garb. However, it is quite a stretch to argue that a judge is somehow violating the religious freedom of others in the courtroom simply by wearing a yarmulke. A yarmulke is an expression of the judge’s personal religious views, not an indication of government policy. By favoring secularism, Denmark is still violating religious freedom. Equal oppression is not the same as fairness.

Human rights-oriented NGOs will soon review and comment on the Danish government’s plan. This will give the discussion of this issue some much-needed perspective. The rhetoric of both the government and the opposition is couched in terms of feminism. A human rights perspective that includes considerations of freedom of religion would therefore greatly expand the scope of the debate over face veils.

If there is any defense of multiculturalism to be found in Europe, it will likely come from the courts. Already, several European courts have pushed back against the imposition of these bans. These include the highest administrative court in France, which overturned France’s 2016 ban on so-called “burkinis” in seaside resorts, Germany’s Constitutional Court, which ruled in favor of a teacher who chose to wear an Islamic scarf in class, and the Spanish Supreme Court, which overturned a local ban on full-face veils in 2013.

NGO’s and the courts may be able to serve as an effective buffer against the tide of forced secularism. However, it is important for ordinary residents of these countries to question their governments’ reasoning themselves. The official justifications for full-face veils do not hold up to scrutiny. Politicians like Justice Minister Poulsen may say that they want a more open society, but they are the ones not being open with their motives.