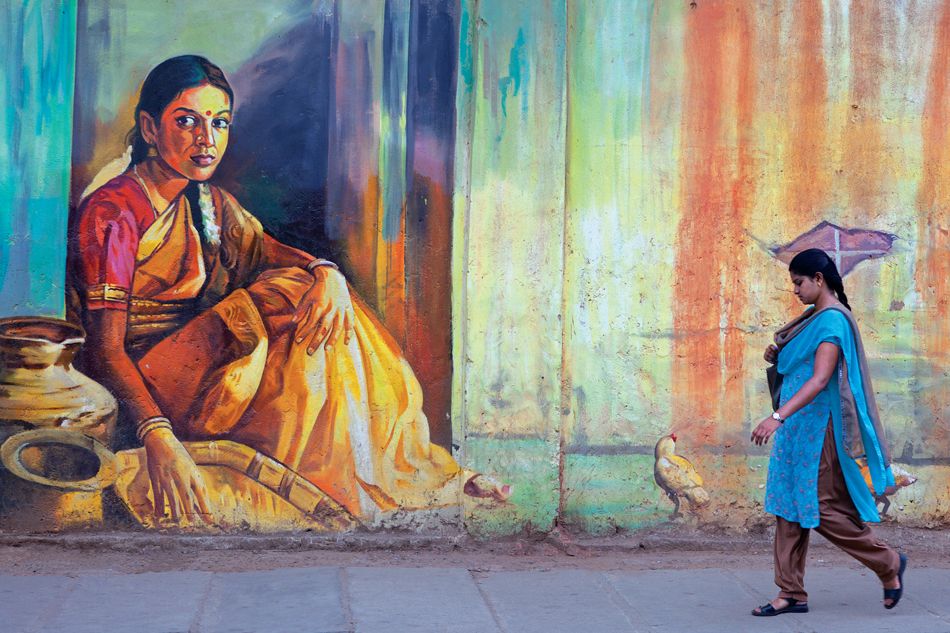 No Nation For Indian Women

With India nearing general elections in 2019, one is forced to look back on where Modi’s revolutionary government has brought us. While it has been generally accepted that the status of ethnic groups such as Muslim and Dalit minorities have declined, another group that has arguably faced increased marginalisation is women. Hindu nationalism or Hindutva has empowered the male chauvinist imagination both institutionally and from the grassroots. This has taken form in court decisions prescribing ‘Indian traditions’ that are inherently patriarchal, vigilante groups reinforcing these traditions in public spaces, and a subtle solidification of traditional gender roles in India.

A recent article in the Guardian by Pankaj Mishra titled ‘The Crisis of Modern Masculinity‘ sparked an important conversation on the link between growing right-wing nationalism and its appeals to masculinity. Mishra looks back at the assassination of Mahatma Gandhi in 1948 by a Hindu nationalist. The assassin’s reasoning for murdering the Father of the Nation: Gandhi’s politics of civil disobedience and peaceful protest was ‘emasculating’ India. Here we see a major juncture in the development of Indian, or rather Hindu, nationalism. The assassination was symbolic of the rejection of the Gandhian ideals of tolerance and instead an embrace of a violent, hyper-masculine nationalist ideology.

The association between manhood and national strength is not special to the Hindutva movement. The meaning of the word ‘chauvinism’ has roots in the belief of superiority of a group over others. This superiority can be represented in the form of patriotism and male dominance. Throughout history, nationalist forces have justified the use of force, whether it be during war or conquest, by invoking a sense of threatened masculinity. Aggressive language, displays of physical strength, and the pursuit of glory has been used by leaders from Mussolini to Hitler to create a need for violence. The acceptance of this violence is deemed necessary because it protects a crucial part of national identity: manhood.

Indian national identity is something that generations have struggled to characterise. With a population of over a billion people, languages that change every few miles, and a complex and fragmented history; what really binds Indians together as a nation? Many prominent secularists would say a spirit of plurality, tolerance and multiculturalism. Others, particularly strong proponents of Hindu nationalism, see the nation as intrinsically tied to the Hindu way of life. The Hindutva movement is a push to repaint India as a Hindu nation.

The Vishva Hindu Parishad (VHP) is an organisation that subscribes to this Hindutva ideology. It falls under the Hindu nationalist parent organisation Sangh Parivar, along with India’s current ruling party: the Bharatiya Janta Party (BJP).  An aim of the VHP organisation is to protect Hindus from the so-called perverse ‘foreign’ influences, particularly Islam, Christianity and Communism. As an extension, one of their primary goals is:

“To protect, develop and spread the Hindu values – ethical and spiritual – in the context of modern times.”

In its grassroots youth movements is a militant group known as the Bajrang Dal. The youth militant group has channelled adolescent anxieties towards a greater maintenance of the superiority of Hindu culture. The mobilization of the youth through visions of national glory and religious myth has been intricately tied to their experience as men or mard. The word mard literally translates to men but is often used in relation to the social expectations and standards of masculinity demanded of Indian men.

The Hindu nationalist conception of the traditional Indian way of life is a point of contention. ‘Hindu Values’ put a disproportionate amount of emphasis on honour, purity and conformity. This translates into the sphere of gender through the strict regulation of women’s lives. They aggressively dictate the roles and behaviour of women in public and private spheres. Activists from the VHP have been found terrorizing public spaces on days like Valentines Day, a symbol of Western corruption. They use violence to enforce supposed Hindu standards of public decency and morality.

Moral policing has even infiltrated the personal lives of Indian citizens. Hindu nationalist organisations have set out to forcefully control women from the clothes that they wear, to who they choose to marry. A recent Bombay High Court case surrounding the abduction of a former Hindu woman who eloped and converted to Islam with a Muslim man is evidence of this. The woman’s father, an important member of a Hindu nationalist organisation, along with Bajrang Dal activists claimed the marriage was a case of Love Jihad.

Love Jihad is a conspiracy amongst Hindu supremacists which accuses Muslim men of seducing, corrupting and converting Hindu women out of spite. Similar cases have sprung up across the country as vigilantes terrorize and harass women for participating in relationships with Muslim men. This lack of agency for Indian women in the case of interfaith marriages is a testament to the patriarchal and communal undercurrents of Hindu nationalism. The upholding of Hindu values is accepted as the responsibility of men- which explains and feeds into the imbalance of power we see between the sexes in India.

India’s slow judicial bodies have resisted taking top-down measures to dismantle an inherently patriarchal system. Take marital rape for example. The issue of excluding marital rape in the constitution’s definition of sexual assault has continuously been pushed by progressives and feminists in India, yet this has been outrightly rejected by Supreme Court judges throughout the years. Lawmakers across the nation are afraid of upsetting the dichotomy of gender in private spheres. It would disrupt the power dynamics of the fundamental institution of marriage in Hindu India- an institution that is corrupted by phenomena like the dowry system. But this brings in the question of whether the law can be prescriptive or descriptive of the values of society. Many would argue for the later, reinforcing the idea of a structurally unchangeable system of ‘Hindu’ values.

Modi’s government has made efforts to create the illusion of progress. With a 33% reservation of seats for women in the BJP’s committees, one would imagine an equal India slowly arising from political representation. But one need not look too far for the real manifestations of the BJP endorsed Hindu nationalism on the lives of women. Violence against women in states like Haryana, Uttar Pradesh and Uttrakhand have increased despite the government’s empowerment initiatives such as ‘Beti Padhao, Beti Bachao’ (Teach Daughters, Save Daughters). In 2016, there were 1,189 reported incidents of sexual violence in Haryana alone, not accounting for the vast amount of incidents that go unreported.

The very seat of sovereign India’s power, New Delhi, is commonly called the ‘Rape Capital’ of India; a term that grew in popularity after the ruthless 2012 gang-rape of a medical student on a moving bus in South Delhi. The Nirbhaya case brought the disturbing realities of the female experience in Delhi to the public eye.

However, India is not experiencing a ‘Rape Epidemic’. An epidemic implies the sudden spread of a disease over a short time period. Sexual assault is not a new phenomenon in Indian society by any measure. Rather, the widespread sexual assault against Indian women is endemic. It is endemic to the misogyny and violence that has historically been woven intricately into the nation’s social fabric.

In early April of this year, Indian society had once again risen up in anger and shock over a gang-rape of an 8-year-old Muslim girl in the Kathau region of Jammu & Kashmir. The girl- Asifa- was abducted, drugged, assaulted and finally killed by a group of Hindu men whom of which included a former government official and a police officer. While the case has so many facets: the role of corruption, the slow and oblivious national media, the ongoing conflict in Kashmir; I would like to focus on how communalism has historically used sexual violence as a tool of humiliation and intimidation.

The barbaric crime was committed to drive Asifa’s community, a Muslim nomadic group, out of the area- which it succeeded in doing. And as if the situation could not deteriorate further- two local Ministers of Parliament from the Bharatiya Janta Party (BJP) publicly supported the Hindu culprits out of religious solidarity. This conflict between the local Hindu community and the Muslim nomadic group is a clear reflection of the broader politicized religious tensions in Jammu & Kashmir. The continued struggle for autonomy by Muslim Kashmiris from a Hindu-majority Indian nation has led to the militarization of the region, with regular state-sponsored violence often against civilians. Yet as always, such fissures have translated into an attack on a community’s pride: it’s women. Women’s bodies have been a constant battlefield for competing ideologies.

The undercurrents of Indian communalism, casteism, and sexism inevitably interact to create the deep-rooted social ills we see today. While the issue of sexual violence is heavily tied to poor law enforcement, it is conducive to a culture of ownership, entitlement and honour tied to the bodies of women. The combination of a militarised youth groups and the diet of toxic masculinity that is fed to men growing up in Hindutva led India is key to the maintenance of this ‘culture’. So is the failure of the judicial system to view women as fundamentally equal citizens, rather than relational beings to men. And so for every prominent female politician, we have a hundred women stuck in abusive, oppressive marriages; a hundred girls fearing shadows passing them on the streets; and fortunately, a hundred women valiantly resisting the practicalities of conformity. In the words of Arundhati Roy, a prominent female voice in India:

“Another world is not only possible, she is on her way. On a quiet day, I can hear her breathing.”