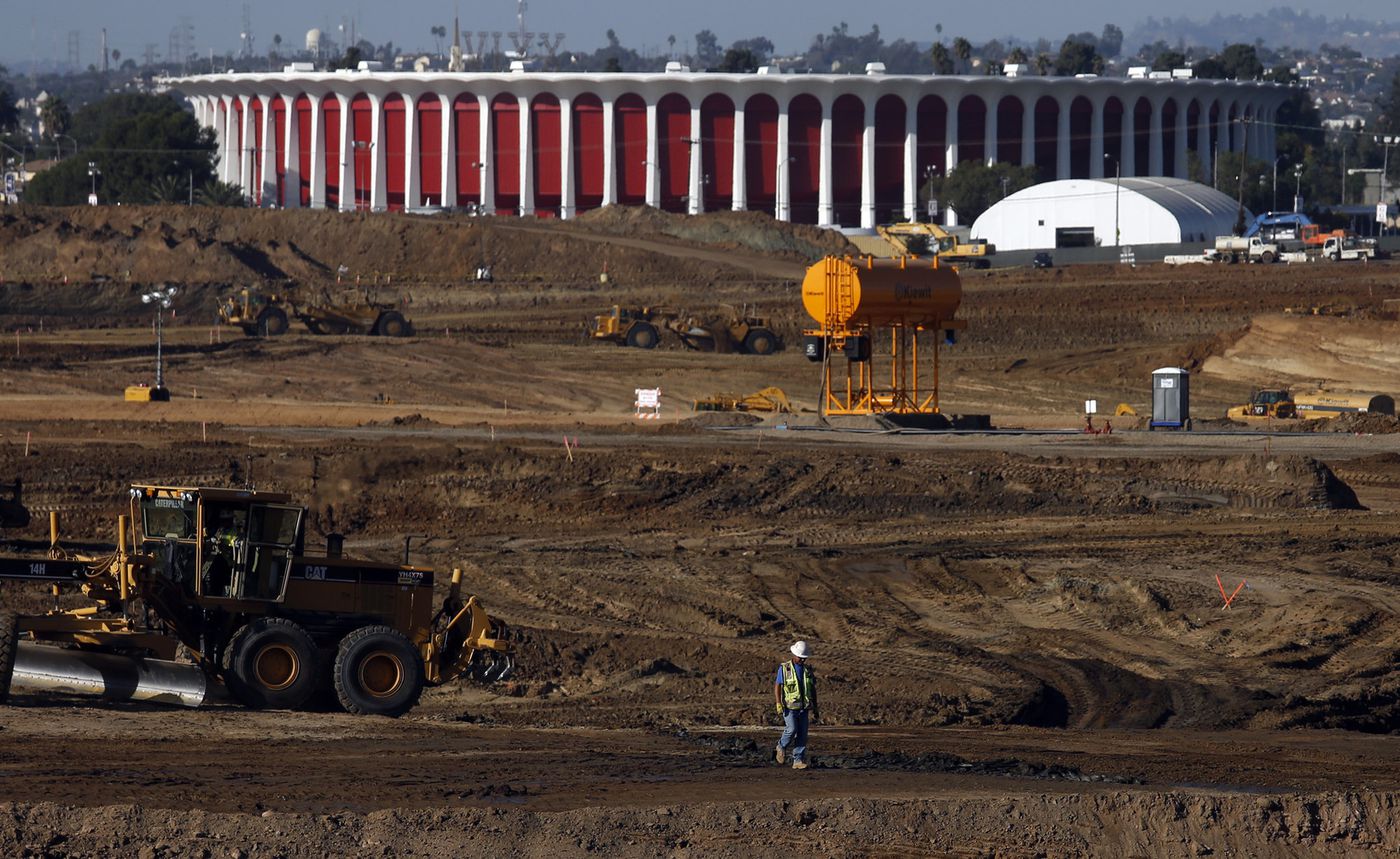 Last July, Inglewood residents received flyers in the mail from an organization known as IRATE Inglewood – Inglewood Residents Against Takings and Evictions. These mailings, as one might guess, were opposed to a new neighborhood development –– the potential construction of a new basketball arena. It was decidedly doom-and-gloom. People would lose their homes to this stadium, the flyer claimed, and the rest of the city would be next if this injustice remained unopposed. These circumstances are typical of residents of places like Inglewood, specifically this particular area, which is largely abandoned and unused since it sits directly under the LAX flight path, and is hence ripe for large-scale building projects and revitalization. For developers, including sports teams trying to build stadiums, areas like this are virgin land, potential untapped, value yet unachieved. And for the Los Angeles Clippers, this is a golden opportunity.

Depending on your point of view, the Clippers are either a second-rate superfluous basketball team, the black-sheep little brother of the Lakers, or an unfairly maligned franchise that’s been stuck in a rut for literally its entire existence. However, regardless of your point of view, the Clippers clearly aren’t very successful, lack any semblance of a genuine, organic fanbase, and don’t even have their own arena. A new arena in Inglewood is their holy grail –– a new lease on life and a chance to redo the past. The Oakland Athletics, at least right now, are in a similar position –– they’ve lost fans to the San Francisco Giants, and play in the same concrete monstrosity as the Oakland Raiders. Previous efforts to move have been thwarted by Giants’ refusal to cede territorial rights in San Jose. The franchise is running out of options; a storied history isn’t particularly helpful when your team doesn’t have any money.

Of course, the Clippers and the A’s are not the only sports franchises that have ever walked down this road. A new stadium is tempting even for franchises that are doing well –– it provides an opportunity for a revamped image, which can help any team out, and it generates excitement among existing fans and can spark renewed interest in the team. It’s a tried and tested idea that often results in success. In California, the San Francisco Giants are the poster child for a new stadium. Their old stadium, Candlestick Park, was south of San Francisco, inaccessible via public transportation, and was doused in heavy fog nearly every hour of every day of every month. Although not as bad as the tiny, localized patches of weather that force Dodger fans to leave home games by the seventh inning, the biting cold winds and freezing fog of Candlestick dented attendance, especially in down years for the team, and relegated presence at home games to an activity only the most hardcore Giants fans could hope to participate in. The construction of AT&T (then Pacific Bell) Park began in 1997, in an industrial area by the waterfront, south of Market, and opened in 2000. Since then, the surrounding area has gentrified rapidly; current construction projects in the Mission Bay area, directly south of the stadium, total over 4 billion dollars. Crucially, this was the first MLB ballpark built without public funds since Dodger Stadium in 1962.

The success of AT&T Park in catapulting team attendance and national profile upwards, stimulating local development in a formerly down-and-out industrial area, and raising team profits serves as the evidence for owners of sports franchises in CA that a new stadium is a smart decision. The only sticking point might be the private financing; owners across the country, including Oakland’s very own Raiders, ask for public money for new stadiums, justifying these demands with promises of new development and neighborhood revitalization. However, research shows that this rarely bears fruit. The Brookings Institute claims that “the economic benefits of sports facilities are de minimus.” But the final card that teams can pull is to threaten to move to somewhere that will fund their stadium, if their current city is being uncooperative. The Raiders, for instance, did exactly this –– when Oakland denied them public funding despite repeated threats to move, they packed their bags and ran away to Las Vegas, whose government agreed to fund a new stadium. Note, however, that cities sometimes lose even if they offer public funds; the Rams recently moved from St. Louis to Los Angeles even though they would have received funds from St. Louis but not from Los Angeles. In general, most franchises seem to value the market size and reach of a location much more than whether or not they are staring hungrily at the carrot that is a publicly funded stadium. But many other franchises, including the A’s and the Clippers, as well as the Rams and the Golden State Warriors, are willing to take the trade. Just over a year ago, ground was broken for Chase Center, the Warriors’ new arena in San Francisco, built less than a mile from AT&T Park, clearly an attempt to capitalize on the current success of the Warriors by imitating the Giants franchise. The A’s and the Clippers are doing the same. And their choices mimic the choices made by the Giants, 20 years earlier –– both are attempting to build in relatively inactive industrial areas, for example. Why would they not?

Of course, every franchise with the hopes and dreams of the Clippers and the A’s is relying implicitly on the city they are building in –– to let them build, to welcome and support the team, but perhaps most importantly, to encourage development around the new stadium and actively work to revitalize the typically industrial area where the new stadium will be located. Not all cities are willing partners in this endeavor. There is a tangible cost to allowing a franchise to build a new stadium and developing around it, although it may be hidden behind positive, feel-good words like “development” and “revitalization.” The reality is that no sports facility has ever appeared to be self-financing. The returns promised for the city may not materialize. For citizens, however, this is hardly a new issue, and it certainly isn’t unique to stadium-building. The circumstances Inglewood residents are facing are typical of citizens living in an area targeted by any kind of developer –– the political machinations, local resistance, threats of eminent domain, and concerns about a changing neighborhood exist in both circumstances. The opposition is similar in both cases; for every new construction project, there is a group similar to IRATE Inglewood opposing it. Even the tangible effects of the projects are similar, as both involve a similar short-term effect in living conditions and a long-term threat of gentrification but also a promise of improvement.

However, despite the apparent similarities between stadium-building and other kinds of local development, they are not treated the same. Sports teams are coveted and receive arguably undeserved public funding for stadiums, but even when arenas and stadiums are privately funded, they still receive outsized support from some communities, businesses, and politicians. Cities like Inglewood rush through unanimous pro-stadium decisions, and state politicians have been willing to waive environmental laws (specifically the California Environmental Quality Act, which requires developers to examine and disclose the environmental impact of their projects) to benefit new stadiums, including a state bill to ease construction of new transportation to the Clippers’ and Rams’ new stadiums, and previously, a special exemption for the Sacramento Kings’ new basketball arena. Often, franchises can also capitalize on reasonably large amounts of public support, enough to streamline their approval process by getting it passed via initiative instead of the slow bureaucratic trudge that most new projects must go through. Selling a new sports stadium is often quite easy–everyone wants their local teams to succeed, diehard fans are often outspoken, and the economic benefits are easily spun as inevitably positive. Stadium proposals and battles also receive disproportionate amounts of national attention for what are essentially local issues, reducing the power of local anti-gentrification organizations, and groups like IRATE Inglewood. Yet the main benefits that stadiums offer local residents are completely intangible. By far the most opposition to stadium projects, especially the A’s and the Clippers’, are by powerful local businesses, which hold far more sway. For instance, in Inglewood, the Forum, an older basketball arena now used mostly for concerts, has strongly opposed the Clippers’ new arena, largely due to fear of competition. And in Oakland, the A’s effort to build a new stadium has been temporarily thwarted by Laney College, the local community college. This particular brand of opposition exists in stark contrast to the kind of opposition housing projects face, for instance, –– city council meetings taken over by activists, stalled projects, even arson.

There isn’t much to justify such a drastic difference between the treatment of stadium projects and any other local construction projects. Franchises pitch their stadiums and arenas as if they encourage development, and their tangible economic effects are similar. However, it’s difficult to quantify cultural importance. Sports teams have a tremendous amount of local sway because they are embedded in collective cultural consciousness. When teams want to build a new stadium, they attempt to capitalize on their local appeal, whether implicitly or explicitly. And teams without a lot of local support, like the Clippers, can still appeal to Inglewood’s desire for national prestige, attention, history, and sports culture. In this case, the model to look to is Boston, and the legendary fanatical support the Celtics, Patriots, and Red Sox enjoy from local fans. However, none of these teams have built a new stadium in a new location since the 1970s; the Red Sox play in the oldest baseball stadium in the MLB. It is unclear that any team that moves cities, or even locations, can achieve a similar degree and type of support. Inglewood and the Clippers, plus Oakland and the A’s, are thus at a crossroads. The Clippers seem determined to continue down the same road that many teams before them have followed –– promises of community revitalization and a search for a strong and vibrant local fanbase, without huge probabilities of success either way. There is a possibility that neither Inglewood or the Clippers come out as winners. The A’s, however, have a choice to make. They do not know, at this point, where they might build, and Oakland does not know if they will stay. It is still possible for them to take a new path –– avoid pursuing a developer-driven vision, avoid capitalizing on unnecessarily high local support, and build a new stadium in genuine cooperation with the city and its residents. It remains to be seen whether or not they will.