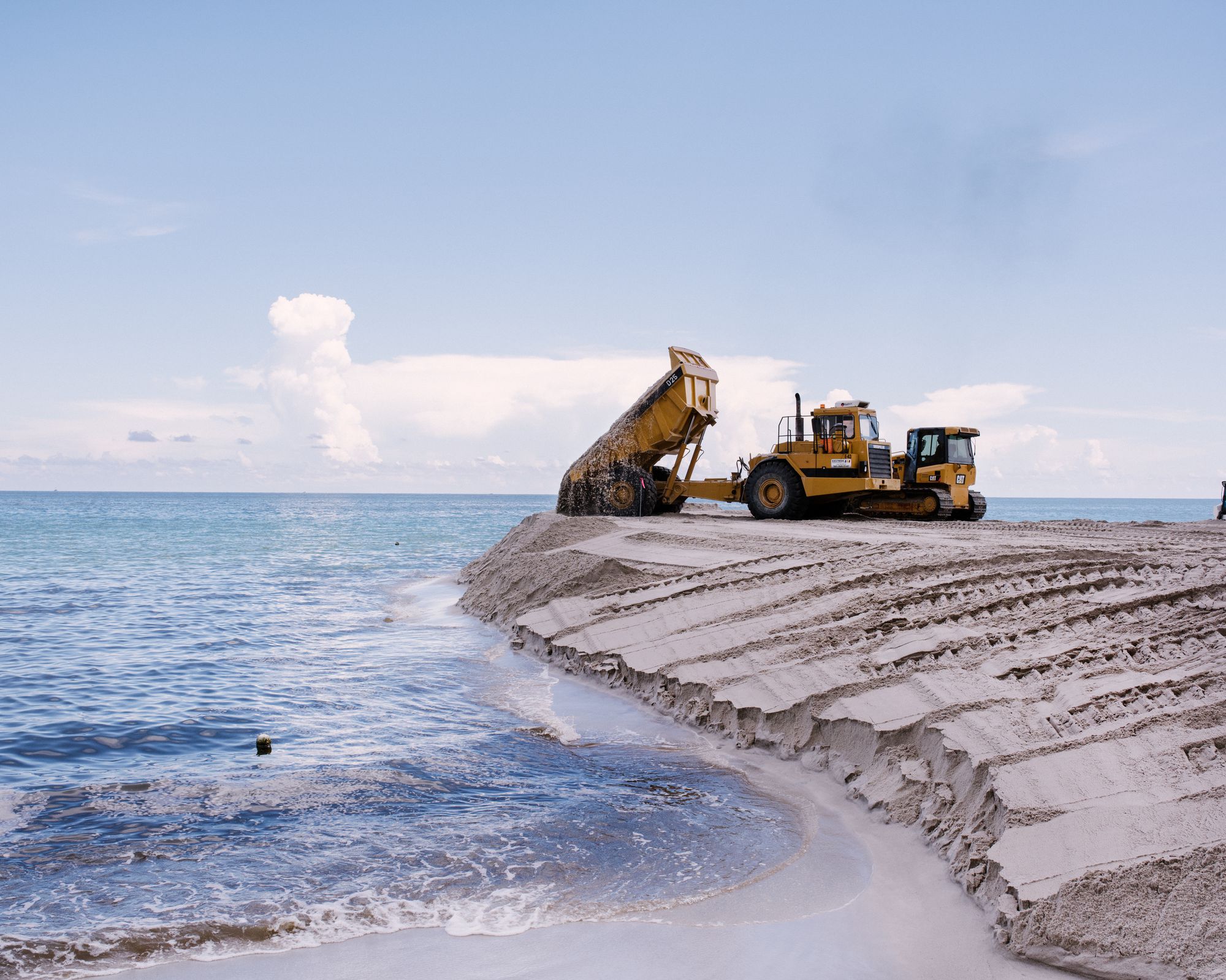 Florida’s Sand: Gone with the Wind

If You Can’t Keep Your Own Sand, Store-Bought is Fine

Florida, the Sunshine State. The land of white, sandy world-renowned beaches. The beauty of Florida’s beaches has been commemorated since the first Spanish colonial settlement in 1565 to the 21st century, with popular beaches like Daytona and Miami a feature in movies, TV shows, and books. But the reality that Florida faces is much different from the glitz and glamour the screen portrays. Florida’s beaches are suffering from debilitating erosion, a process that constantly strips away the pearly-white sand that the state is famous for. Nearly half of the state’s 825 miles of beaches are “critically eroded,” leaving the Floridian coastline and economy in peril. However, rather than focusing on environmental legislation or the protection coastal communities, Florida is tackling the lack of sand another way — importing it from the Bahamas.

In a way, the importation of sand is logical. Erosion is a natural process that can never be stopped, so replenishing the sand of a tourist-heavy beach every few years makes sense. However, the problem facing Florida’s beaches is no ordinary erosion; it’s been exacerbated by increasing numbers of tropical storms and hurricanes over the past few decades. During Hurricane Irma in 2017, Miami-Dade county lost 170,000 cubic yards of sand. Natural disasters like Irma have increased exponentially in the last thirty years, and are, scientists suspect, products of global warming. But nature alone is not to blame. Inadequate beach maintenance and unchecked coastal development are also to blame for beach erosion. Interestingly, studies have shown (Links to Paywall) that a positive correlation exists between the extent of beach nourishment projects and coastal development — the more nourishment an area receives, the more developed it becomes, which exacerbates the erosion driving the nourishment in the first place. Miami-Dade and other wealthy, tourist-friendly counties are very lax with development codes to stimulate the creation of beachfront properties and increase tax revenue. An example of this can be seen with a statute that requires a public forum be held before declaring any beach zone “protected”, meaning that developers cannot build on it. Protected lines are also drawn using surveys of the past hundred years’ tides, not accounting for rising water levels and enhanced erosion. But Florida needs to factor in climate change when instituting development codes to prevent the sprawl of beachfront properties — in Southeastern Florida between 2011-2015, sea levels rose six times faster than they did between 1996-2010. With these properties come jetties and seawalls, barriers designed to keep back ocean water when floods occur. Unfortunately, these barriers also enhance the effects of erosion and leave more sand vulnerable to it.

Florida has tried to tackle the sand problem in many ways over the last three decades. The most popular method thus far has been dredging: the process, introduced in the 1920s, functions by way of sand being turned up from the bottom of the seafloor to replace the sand lost on the surface. However, dredging is expensive — costing over ten million dollars for one project — and not possible in some counties, such as Miami-Dade, because the offshore continental shelf is too narrow. Florida also has a history of “beach nourishment” projects in which sand (brought from inland) is spread onto beaches to replenish the sand lost to erosion. According to a database of 2,000 beach nourishment projects, 500 of them have spread 293 million cubic yards of sand at a price of $2.4 billion dollars. In March 2017, $12 million worth of sand was added to Miami Beach, a location with a history of requiring emergency restoration — most recently, twice between 2000-2010. Florida’s governor and representatives seem determined to keep up the practice of importing sand as a solution. On February 2nd, 2017, Senator Marco Rubio (R) introduced the Sand Acquisition, Nourishment, and Development (SAND) Bill. The bill would give the Army Corps of Engineers the ability to import sand from the Bahamas, since importation, requiring less expensive fuel and fewer workers, would be cheaper than transporting sand from inland Florida. The bipartisan bill has the support of all the South Florida representatives in Congress but is opposed by private dredging companies, who argue that allowing the importation of sand would be unfair and spent over $150,000 lobbying Congress in 2017. While it remains to be seen whether the bill will get anywhere, the very fact that it exists shows that Florida is addressing the problem of erosion with a short-term solution designed to benefit its economy.

In fact, most of Florida’s environmental policy has had the goal of boosting the economy. Florida makes billions off of its 97 million annual tourists, money it can’t afford to lose — tourism contributes over $50 billion to the state GDP annually and is instrumental in making Florida the fourth largest economy in the United States (behind California, Texas, and New York). Florida’s beaches and waterfront activities draw more people than any other state attraction — more than Disney World, Seaworld, or cruises! To increase tax revenues on desirable waterfront property, many cities have lax building codes that allow development on critically eroded beaches, which is both foolish and dangerous. Any waterfront property is at a higher risk of being flooded or adversely impacted by hurricanes and contributing to the erosion problem.

Climate change does not seem to be a worry for Florida’s politicians. Under Governor Rick Scott and a Republican legislature, the state has been increasingly lax with building codes and pro-business (often at the expense of the environment). While the state legislature has approved environmental policy designed to preserve beaches, most of this legislation is rendered ineffective by loopholes. Many of the environmental protection provisions contain clauses that allow counties to opt out of the statewide development-impeding beach protections as long as they receive approval from the Department of Beach and Shore Preservation. That all of South Florida’s representatives are on board with Rubio’s SAND Bill shows an alarming willingness on both political sides to use up all available resources and simply buy more. And the cost keeps rising —Senate Bill 1590, which died in committee in May 2017, proposed increasing the minimum state funding commitment to at least $50 million annually, up $20 billion from the previous minimum of $30 million set in 1998.

This short-sighted policy of funding environmental negligence will only dig Florida into a deeper hole. Importing sand is not sustainable, as the world’s quantity of sand is limited. Nor is it price effective — millions of taxpayer dollars are spent on beach nourishment projects every year only to have seasonal hurricanes strip away the work done. Experts from Duke University warn that human societies will need to retreat from shore — sooner rather than later, given the rapid increase of sea levels and amount of hurricanes in the region. Instability is inherent in economies built upon eroding beaches. To tackle the issue, the National Wildlife Foundation suggests a combined policy of mitigation (passing laws protecting beaches) and adaptation. Erosion never stops, so an intelligent approach to the problem would be to focus on shifting the tourism industry away from beaches —  constructing piers, implementing windsurfing and scuba diving programs, and investing in ecotourism are all sustainable ways for Florida to keep its tourists coming back for more. Beach restoration projects should be allowed, but regulations need to be set to ensure beach nourishment isn’t the go-to solution in most cases. Establishing how much money can be allotted per county every five or ten years and a panel of geologists to determine the extent of the damage will keep Florida from just throwing money at the problem.

Unfortunately, none of Florida’s representatives in Congress nor its governor have proposed any strong fundamental economic changes. While there is no clear path to shifting Florida’s tourist economy away from its unique beaches, trying to maintain that uniqueness has taken its toll on Florida and will continue to do so. To keep its citizens safe, Florida should institute stricter building codes that keep human life and properties out of the ocean’s way. A good example to follow is France (Links to Paywall), which has outlawed the construction of new roads or buildings within 2000 meters of any beach, lagoon, or sand dune, due to concerns over rising water levels in the Bay of Biscay. Florida has a similar problem — according to the National Oceanic and Atmospheric Administration, sea levels will rise by as much as three feet in Miami by 2060.  With a population of 21 million expected to grow by another million before 2030, measures to protect people and infrastructure in Florida are imperative.

Although there is no easy solution to the erosion of Florida’s beaches, beach nourishment projects to replace lost sand are not the answer. Nor is Rubio’s SAND Bill or any other legislation that focuses on providing short-term solutions instead of addressing the long-term problem. Florida’s legislators and politicians must realize that the status quo is the result of decades of short-sighted policy; approving the SAND bill would only reward Florida with federal money for its poor handling of the situation. While its beaches may be gone in the wind, the state can still fight to defend the rest of its natural beauty. Moving ahead, Florida must think more about its future when writing and voting on the legislation of today and take concrete steps to ensure Florida won’t lose its battle with Mother Nature.