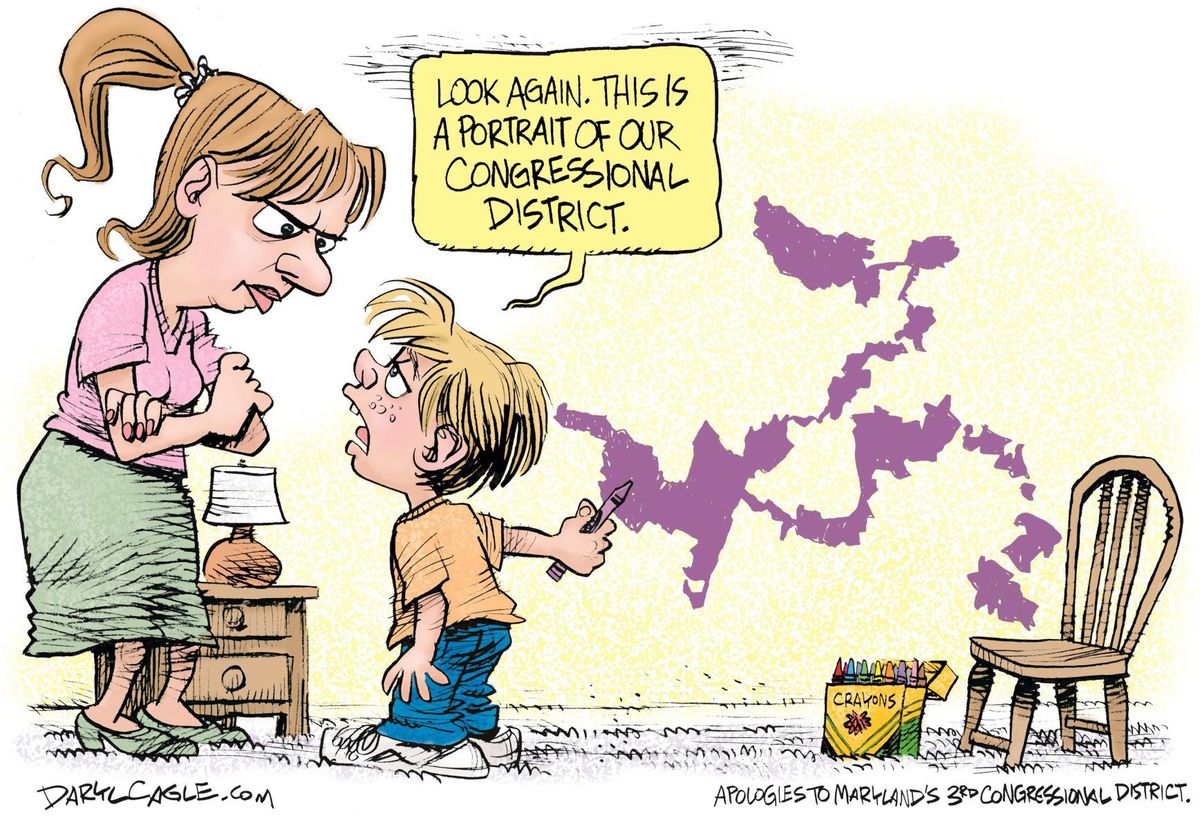 Partisan gerrymandering has to be one of the least discussed but politically important topics in our generation. The notion that states can reapportion their districts with lines that can give the incumbent party a clear advantage in upcoming elections is what furthers the political divide and de-legitimizes the bedrock of our democratic republic. Several court cases over the last couple of decades have established that there is a clear judicial failure to intervene on partisan gerrymandering. All of which influence the most recent Supreme Court case, Gill v. Whitford, which is expected to be ruled on in June of 2018. Increased reporting on gerrymandering may not necessarily influence the Supreme Court’s decision, but it can help voters be more vigilant as to when their state is being gerrymandered and to call their representatives to vote against partisan gerrymandering efforts.

So What Is Gerrymandering?

Gerrymandering is a term to describe abusive forms of redistricting and it has been around for a very long time. Normal redistricting efforts are meant to compensate for shifting populations in order to keep the proportional votes of different groups of people equal. Gerrymandering is different, however, as it basically allows for political parties to redraw districts to steal votes through two methods called “cracking” and “packing” (pictured below). Cracking splits large populations into multiple districts as to take away their voting power in those districts, while packing makes it so that large groups end up only being in a certain district and are unable to win the others.

While it would seem intuitive that nonpartisan commissions would be equitable in their redistricting efforts, a study from UCLA and Yale shows that they are actually worse at creating equitable maps, with state legislatures creating maps 71 percent less competitive than fair simulated maps, and independent commission maps being 76 percent less competitive than the simulated maps.

So then why don’t we just end redistricting? Well, because the maps that we have now would become archaic by the next census, as populations shift and population density changes in areas, the representative vote would also change at a commensurate rate, theoretically. Redistricting is the effort that maintains that commensurate fairness in our electoral politics. The problem is that we currently do not have a system that allows for an equitable legal test to understand when seemingly fair redistricting becomes partisan gerrymandering.

Legal Tests and Failures of the Legal System

One of the major problems in combating gerrymandering is how invisible the practice is, despite its ubiquity . Gerrymandering is not just a theoretical concept that plagues electoral politics. It has been consistently brought before the Supreme Court and legislators, with no real change in sight, as the courts have constantly dismissed it due to not having a valid legal test. This functional and symbolic failure of our institutions indicate that there is no true oversight within the regulatory framework of electoral politics.

So let’s track the history of gerrymandering in the Supreme Court. Starting with Reynolds v. Sims, the 1961 case was brought by the voters of Jefferson County, Alabama, claiming that they violated the Equal Protection Clause of the constitution, which cemented that all citizens of the United States deserve equal protection under the law, by apportioning with disregard to population variance that resulted in the dilution of different counties of votes and representation, which disproportionately hurt minority voters and Democrats. This advancement in the court does not seem that advanced or controversial given the 8-1 decision, but it does grant a basis for understanding that there is an identifiable standard to see the grievances of those under gerrymandered districts.

The next case is what sets the tone for the Supreme Court on political gerrymandering to this day, wherein the 1985 case Davis v. Bandemer, Democrats in Illinois argued that the new redistricting map put them at a severe disadvantage and was, in fact, political gerrymandering, which violated the Equal Protection Clause. What the Illinois Republicans, who held the majority in both the 100 seat house and the 50 seat Senate, did was to redistrict with multi-member and single member parties, which just means that some districts either had multiple or one representative up to vote for, that ended up “cracking” and diluting the votes of Illinois Democrats. This was shown when the Democrats for the House won 51.9% of the votes in the 1982 election but only won 43 seats, while the Democrats for the Senate won 53.1% of the votes but only won 13 seats. In the multimember districts, Democrats won 46.6% of the vote but only elected three of the 21 Democrats running in those districts.

In 2004, the Supreme Court ruled in the Vieth v. Jubelirer case, in which the plaintiff argued that the Republican majority in Pennsylvania had unconstitutionally redistricted so as to gerrymander along partisan lines. The plaintiffs, who were voters in Pennsylvania, argued that there was a more efficient way of drawing the map that did not include such heavy dilution of Democratic votes, which violated the Equal Protection Clause. However, because of the precedent set in the earlier Davis v. Bandemer decision, the Supreme Court ruled that although the practice was constitutional, the court would have to remain non-interventionist because of the lack of a legal test and precedent for judicial action.

“Eighteen years of judicial effort with virtually nothing to show for it justify us in revisiting the question whether the standard promised by Bandemer exists…. Lacking them, we must conclude that political gerrymandering claims are nonjusticiable and that Bandemer was wrongly decided.”

I want to highlight that this is an active trend of the courts, where they ignore the empirical data because they do not want to be hasty in their decision. This is echoed in Justice Scalia’s opinion in Vieth v. Jubelirer where he states, “Eighteen years of judicial effort with virtually nothing to show for it justify us in revisiting the question whether the standard promised by Bandemer exists… Lacking them, we must conclude that political gerrymandering claims are nonjusticiable and that Bandemer was wrongly decided.” Note that this is an opinion, and was not the holding that the court adhered to, but it does speak to a striking problem that the Courts are complicit in. Scalia voices a common recurring theme of the Supreme Court, which is that when injustice does not have a framework that the Courts can “verify” to resolve, they become passive in its induction. Both the Bandemer and Jubelirer cases have brought forward testable methods, where we can see a large discrepancy in the amount of “packed” or “cracked” votes. The issue that the Supreme Court seems to be stuck on, as Scalia continues, is the fact that “…a person’s politics is rarely as readily discernible—and never as permanently discernible—as a person’s race. Political affiliation is not an immutable characteristic, but may shift from one election to the next; and even within a given election, not all voters follow the party line.”

Whether or not there is a long-term predictable trend for someone’s personal politics is irrelevant to the proximate harm where we can see large-scale discrepancies that violate the one person, one vote section of the Equal Protection Clause. And while the recent victory in the 2016 Supreme Court case Cooper v. Harris is a landmark in striking down North Carolina’s racial gerrymandering, other states such as Texas, Utah, Louisiana, and Ohio that are politically gerrymandered still suffer greatly (pictured below):

So Why Gill v. Whitford?

Gill v. Whitford is a current Supreme Court case that tackles the redistricting problem in Wisconsin. In 2010, the state voted for a Republican majority for the first time in 40 years. After that, the Republican majority then drew a map of Wisconsin that would mean that the Republicans would win in any voting scenario. Their map was generated from a computer algorithm that purposely cracked and packed these Wisconsin districts in such a way that always result in the Republican minority winning an overall majority of representation in the state. This becomes a very clear case of partisan gerrymandering, and the plaintiffs argue that this is unconstitutional as it breaks the “one person one vote” principle as well as the Equal Protection clause and the First Amendment basis of the freedom of association.

But why is this different from the previous cases? The problem in the past has always been about the lack of a testable method to see partisan gerrymandering. Now, there is a new test, one developed by Eric McGee, a political scientist at the Public Policy Institute of California, one that tracks the amount of wasted votes. Wasted votes are the metric used to examine and quantify the votes that are lost in cracked or packed districts. For example, if a voter should’ve voted in District A but wound up being put in District B, where that voter’s party was already going to win a majority, their vote is a wasted vote. Prior to this, the methods were focused on identifying “packing” and “cracking” and the plaintiff’s arguments were based on the Equal Protection Clause. This time, the argument that partisan gerrymandering disenfranchises political associations from ever winning representation now means that there is a functional difference because the Equal Protection clause is more about protecting minority classes than the freedom of association.

It’s also not just the new arguments in the case, but remember Vieth v. Jubelirer? While the majority of the votes struck down the cases, there was no majority opinion, which meant the court ruled in a plurality. Scalia’s opinion stated that because of the lack of a testable method, it was time to rule that partisan gerrymandering cases were non-justiciable. Justice Anthony disagreed, though still ruled with the votes, arguing that we should still be looking for the right legal test. Now there is one. But not only that, Justice Anthony, who is the deciding vote in Gill v. Whitford, is a big proponent of the First Amendment.

The testable method that McGee has developed is focused on measuring wasted votes by measuring an “efficiency gap” that calculates the wasted votes in each district and combines into a single quantifiable metric. The plaintiffs argue that this new method is not to eliminate partisan gerrymandering, but to make sure that it is not impossible for minority parties, like the Democrats, to win. According to the plaintiff’s and McGee, this efficiency gap should be limited to a maximum of seven points in any given district.

On October 3rd, 2017, the Supreme Court heard the arguments from both sides and are slated to come to a decision soon, the implications of which could mean the end of egregious partisan gerrymandering in the United States, and the return of equitable representation in our constitutional democracy. More importantly, the 2016 election has shown us why partisan gerrymandering is so corrupt and insidious in its conception, as it greatly placed Democrats at a disadvantage in the 2016 election, and guaranteed large Republican representation on the state and federal levels that did not match with the majority of votes in those states and districts.