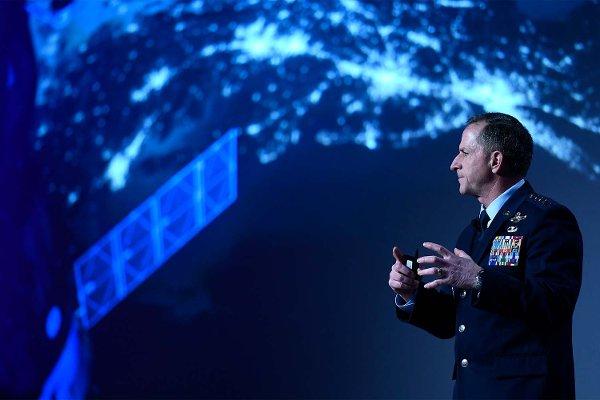 To Boldly Go Where No Military Branch Has Gone Before

In 1969, the United States became the first country to land a man on the moon. While this was not the first time America had set its eyes upon the stars, it was one of the first realizations of that dream. Nearly fifty years later, a new era may have arrived as serious conversation has begun to arise over the creation of a new military branch — this one, with its mission written in the stars.

In July 2017, the U.S. House of Representatives passed the National Defense Authorization Act for Fiscal Year 2018. This bill, prior to amendment by the Senate, would “require the Air Force” to establish “a new branch of the military called the ‘Space Corps’” by 2019 that would replace space departments currently under the jurisdiction of the Air Force such as Air Force Space Command. However, following the Senate markup, the final bill did not include the creation of a sixth military branch, but rather, simply created “a new officer to oversee space defense in the Pentagon”.

One of the greatest proponents for the establishment of the Space Corps is Representative Mike Rogers (R-AL), chairman of the House Armed Service Subcommittee on Strategic Forces. In a keynote address delivered at a conference at the Center for Strategic and International Studies on September 6, Congressman Rogers argued that the “Space Corps would be a better steward of space matters than the Air Force.” Air Force Secretary Heather Wilson, who also spoke at the conference, agreed with Congressman Rogers, stating that “space will become more congested,” and as it does so, it will also becoming “potentially more contested. Space will become more like the ocean. There will be more players — some of them private.” She goes on to predict that within the next fifty years “space will be a more common region for ‘human endeavor’,” and thus, the Space Corps’ creation would specifically be a preemptive measure for this inevitable result. She concludes by arguing that she “could not agree more that now is the time to address the threats our nation faces in space.”

Likewise, at least on the part of the House of Representatives, conversation surrounding the creation of the Space Corps has been very much a bipartisan effort. Though spearheaded by Republican Mike Rogers, Democratic Congressman Jim Cooper (D-TN) issued a joint statement with Mr. Rogers arguing that “there is bipartisan acknowledgement that the strategic advantages we derive from our national security space systems are eroding.” The statement goes on to add that both Congressman Cooper and Rogers believe that “the Department of Defense is unable to take the measures necessary to address theses challenges effectively and decisively,” and thus, this oversight calls for the necessity of the establishment of the Space Corps.

However, despite this support from some House Republicans such as Congressman Rogers, the Senate has been far more hesitant to create a sixth branch of the military. For one, Democratic Senator Bill Nelson (D-FL) filed for an amendment that specifically prohibited the Space Corps “or any other type of new corps in the service.” This successful amendment effectively resulted in the removal of the Space Corps in the finalized National Defense Authorization Act (NDAA) for Fiscal Year (FY) 2018.

Furthermore, it appears as if Senate dissent on its creation is not unique. Air Force Chief of Staff, General David Goldfein argues that “the Air Force should manage military space operations for the time being.” While he does recognize that there might come a “time in our future where we want to take a look at this again,” he believes that as of right now, the Air Force is fully capable to address any concerns regarding territory or conflict in space. This sentiment is similarly echoed by conservative groups such as The Heritage Foundation. John Venable, a Senior Research Fellow for Defense Policy at The Heritage Foundation and a U.S. Air Force veteran, for one, argues that “while it is easy to target the Air Force” for the “loss of U.S. space dominance, … that loss is directly attributable to… years of underfunding the Department of Defense” has endured. Thus, he argues that the solution to bolstering U.S. presence is space is an increase in military funding rather than an outright creation of a new branch of service.

It is clear that the debate over the Space Corps is one that transcends party lines — and while the finalized NDAA eliminates any possibility of its creation prior to 2019 (at which point a new defense budget will be authorized), this debate at least signals that serious consideration has been brought to the table with regard to its possible creation in the near future.

The future of the Space Corps is uncertain at best, but the conversation around it points to a much larger conclusion  — that the United States federal government recognizes that space is not something it can ignore in its policy planning and creation. It is a testament to the fact that space truly is the next frontier, a trek into the stars that began nearly fifty years ago with the landing of the first man on the moon.