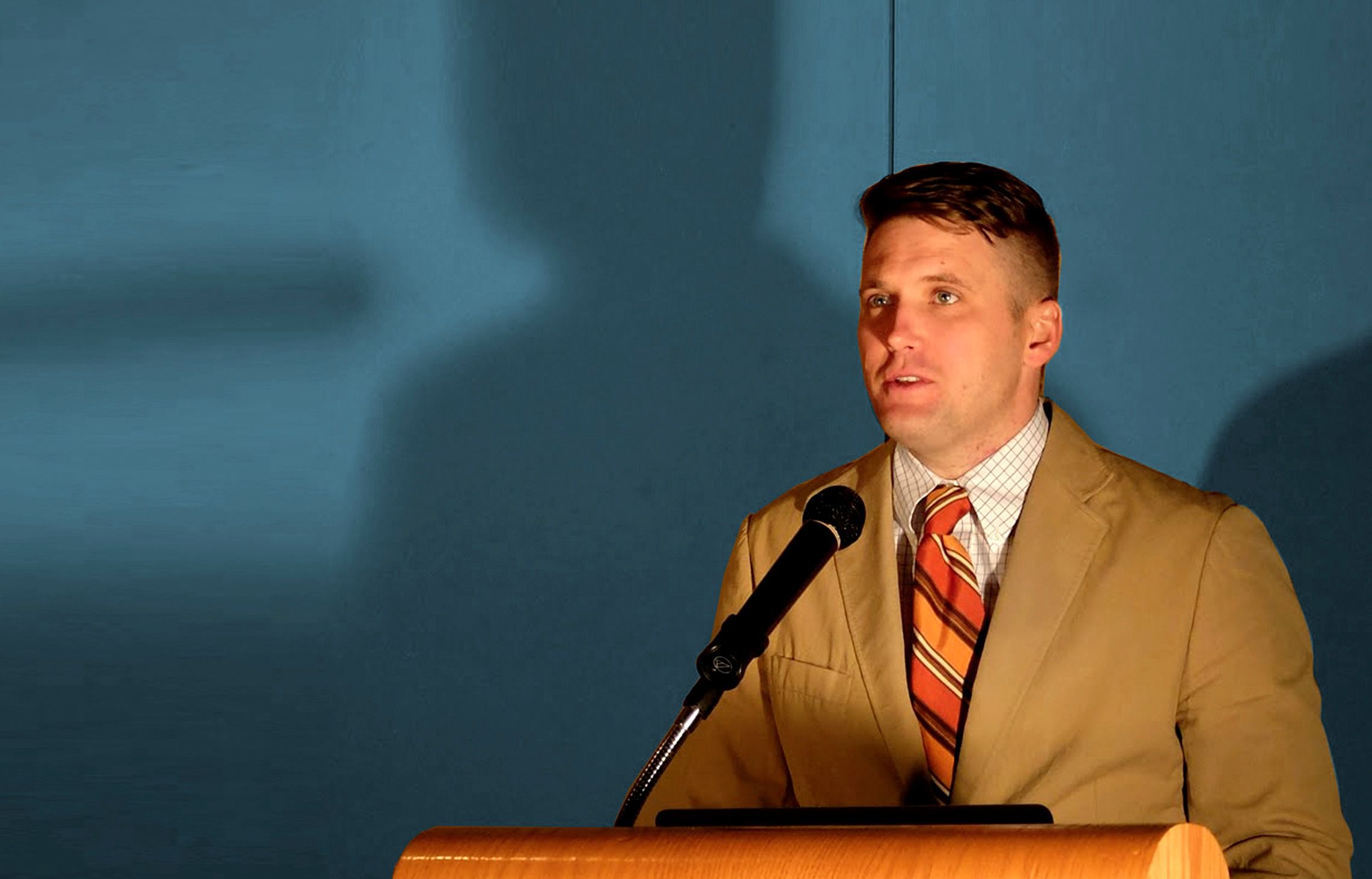 It’s hard to start an article that talks about Nazis. Nazis. In my short lifetime, I would hear “Nazi” in a history or government class. When I entered college, I heard it from freshmen in political science courses who decided that by asking the age-old question, “but what about the Nazis?” would show how smart they are. But now I hear “Nazi” and it’s followed by “Jesus, Becky, did you hear about the Nazis on campus?” Or maybe one that you’d recognize, like when Tina Fey went on Seth Meyers to express her disgust and surprise at the events of Charlottesville. I think there’s a categorical difference toward how we understand the world today, in particular, from white people who declared the age of racism to be dead and where half of all Americans believe we live in a post-racial society. And this might easily be related to how I can clarify that first sentence. It’s hard to start an article that talks about Nazis. But it should not be not surprising.

Part One: Dispel the Myth

During the 2016 election, a man named Richard Spencer took the stage at the National Policy Institute in Washington, D.C. and the audience cheered. Much of them threw up the Nazi salute and joined Spencer in his chant of “Hail Trump!” and cheered as he called the mainstream media “cucks” and “leftists” while questioning if they were even people at all. This was the time period in which the alt-right gained national notoriety and Richard Spencer was given the credit of rebranding white nationalism to a more palatable and youth-forward movement. The media response was more of confusion than outrage and treated the rise of the alt-right as an individual occurrence, rather than a symptom of a larger, systemic disease. This is the mask of a post-racial society that can render some docile to such violent ideologies. The rise of a new Nazi party within the United States could only have come about when the blinds were down and when many refused to come out from the cave.

If we are to have a paradigmatic shift toward understanding how pervasive groups like the alt-right are and from where their ideology is derived, we should have an accurate genealogical account of race relations in the United States. That is not the purpose of the article, given that I have limited space, but highlighting these instances would be a good foundational framework for examining such history. Because to understand history is to understand reality. And in the age of fake news and alternative facts, we could all use a fresh breath of reality.

Let’s begin backward, where we can look at the quite recent 2013 Supreme Court case, Shelby County v. Holder that exemplifies the harm of believing in the delusion of a post-racial society. To give some context, Shelby County, a county in Alabama’s warm backyard, sued the U.S. Attorney General, stating that section 4(b) and section 5 of the 1965 Voting Rights Act was unconstitutional, — a law enacted to protect minority voters from intimidation or discriminatory laws. To save you from the litany of legal jargon that would barrage you in your Google searches, I’ll condense here. Section 4(b) stated that counties that had a history of voting discrimination must get preclearance, or simply, permission, to change any of their voting laws or procedures. Section 5 merely established a formula to determine which counties had to get preclearance. In a 5-4 split, the Supreme Court, headed by Chief Justice John Roberts, struck down section 4(b), thereby making section 5 a law with no teeth. Quoting Roberts from his opinion on the case, “Our country has changed, and while any racial discrimination in voting is too much, Congress must ensure that the legislation it passes to remedy that problem speaks to current conditions.”

This is a shocking statement, where proponents of the decision were widely placing the decision on the common platitude that we are now in a post-racial society. These are the same people who see racism today and make naive comments such as “It’s 2017, how can people be like this?” as though a totalizing conclusion to racial injustice has already been reached. This post-racial attitude quite literally influenced a major court case that protected minorities from voting discrimination, which eventually led to counties like Shelby County, and whole (Republican) states to start instituting voter ID laws, which are often seen as a veil to disenfranchise minority voters who have a harder time obtaining a state-sanctioned identification. It’s easily indicative of how dangerous such a delusional political attitude can be and how it does not rest on a sound understanding of reality. These post-racial attitudes only serve to paper over these historic attitudes. Even the Civil Rights Movement is emblematic of how people believe racism is dead because of the Civil Rights Act. These are the people who share an optimistic viewpoint of race relations and believe that we can reach an era of “colorblindness,” and specifically though so when Barack Obama became the 44th President of the United States, and again, once proclaimed the age of racism to be dead. These statements specifically build on the false hope and inherent white naivete that is built into that collective consciousness, because while a black man became the most powerful man in the country, white people around that same nation lynched and burned effigies in protest claiming that Obama was “not my president.”

Another example of this is the efforts of multiple people to try and repeal the efforts of affirmative action policies in hiring and for university admissions. Affirmative action was a set of policies that were used to combat against decades of discrimination by allowing members of a minority group to be admitted or hired into a university or workplace. In recent years, several cases like Grutter v. Bollinger, Fisher v. University of Texas, and Hopwood v. Texas, have been filed against universities for using a race-based admission policy. While the first two cases were struck down in court, the third was actually maintained and killed affirmative action in Louisiana, Mississippi, and Texas, until the decision was abrogated in the later Grutter v. Bollinger case. However, these legal cases have demonstrated a growing attitude among its supporters that maintain affirmative action policies can lead to things such as reverse discrimination.

These notions are dangerous on their own, but when added together with the different arguments that follow alongside anti-affirmative action advocates, such as the mismatch argument which states that the beneficiaries of affirmative action end up going to schools too hard or culturally different for them, there is a very symbolic form of racism involved. In the aforementioned Fisher v. University of Texas case, an opinion by the the late Justice Antonin Scalia gave a form of the mismatch argument stating, “here are those who contend that it does not benefit African­-Americans to get them into the University of Texas where they do not do well, as opposed to having them go to a less­ advanced school, a slower­-track school where they do well.” While some find a form of comforting logic in this, it is based on a cultural belief that institutions of higher education are formally a foreign culture for minority students who simply do not belong.

If the Shelby County case has taught us anything, and if the election of Trump has shown anything about a silent majority sweeping across the United States, it’s that optimism is not a commensurate methodology anymore. It cannot reconcile the realities of material violence that is intertwined with the lived experience of being a person of marginalized identity. You can’t merge the vision of a race-neutral society with the material reality of the disproportionate amount of black inmates in prison. You can’t square the circle that is the number of unarmed black men who are shot down by the police. This isn’t to say that we should not strive for a multicultural society, but rather, we should view the state of revolution and resistance as a vigilant cornerstone to that society. We should remove the understanding that there is an endpoint to racism and understand that even in the calmest of times, it remains pervasive and diffuse. For some, this is a difficult viewpoint to swallow, but it ultimately does not change the reality around us. Because every single time that we believe we have reached that post-racial utopia, or we employ this perspective of optimism, we end up masking over the violence and leaving the people who need justice the most out in the cold.

Understanding that the United States was built on the suffering of people of color is a good foundational framework to understand the covert and sinister nature of white supremacy in the United States. The cotton that clothed the founding fathers was picked by slaves (they even owned their own slaves too). The railroads that modernized the United States into an infrastructure and manufacturing powerhouse is littered with the bodies of dead Chinese workers. The vegetables sitting on that nice white family’s Thanksgiving dinner was picked by Latinx immigrants. Community colleges and racetracks once housed Japanese-American citizens families because they were deemed a threats. Neighborhoods are “safe” when black families don’t live there. Our education system is built on segregation or “school choice.” And it’s not that black lives don’t matter, but that all lives matter. The insidious quality of colorblindness isn’t that it is its own form of racism, but that it is not much different from the racism of decades ago. And understanding the morphology of how fluid and pervasive colorblind racism is in the United States is just the first reality check that people need to give themselves. Especially when there are Nazis storming down our streets. But hey, there are “some very fine people on both sides.”