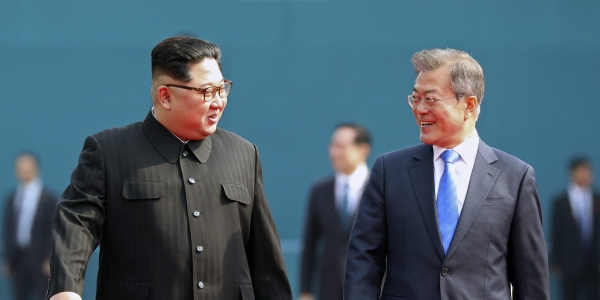 On April 1, South Korea’s biggest Korean Pop stars arrived in Pyongyang to perform a joint concert with North Korean colleagues. The countries planned the three-day tour with meticulous attention to detail to avoid conflict over dances, lyrics, and costumes.

They organized the concert, forebodingly titled “Spring is Coming”, as a gesture of good will before the summit on April 27 between Kim Jong Un and South Korean president Moon Jae-in. The North was uncharacteristically diplomatic and the performances were thoroughly organized such that all hiccups were avoided. The South took a deep exhale. This is but the most recent example of K-pop’s political uses.

Some may assume that PSY was the first to bring K-pop across borders. With his music video for “Gangnam Style,” his catchy rhythm and dance moves have broken YouTube records, hitting over 3.1 billion views since 2012. However, it was Seo Taiji and Boys, a trio of hip-hop singer/rappers, who initially melded American pop with Korean lyrics in their 1992 debut. Their music has been so influential in the evolution of K-pop that many mark their debut as the genre’s genesis. Entertainment companies recognized its popularity, and the new style of music brought on a period of various copycat groups, such as boy bands H.O.T. and Sechs Kies.

The Korean government also caught onto the potential of this sweeping phenomenon, and carefully fostered its development. In the 1990’s the government invested millions into a Ministry of Culture, creating a department specifically for K-pop. This dedication paid off, and a cultural dispersion, known as the Korean Wave, emerged in countries like Japan, China, and North Korea. Korean pop-culture invaded Northeast Asia. Overall, socio-political relationships? Not so good. Economic-cultural relationships? Thriving.

Whether at Coachella or on an international tour, Beyonce will always play “Single Ladies” in her native tongue. But Korean artists appeal to their worldwide audiences. For example, the Wonder Girls, a popular female Korean ensemble, would sing their hit “Nobody” in Korean if in Seoul. Likewise, they’d perform the song in Chinese if they toured Shanghai, Japanese for Tokyo, and English for Los Angeles.

This diversity attempts to appeal to all cultures. Populations across continents can interact and connect through their love of similar musicians, and the artists find success globally. But the cultural disagreements between East Asian nations run deep.

“Each of these countries wants to wield influence on the Asian continent as a whole,” said Billboard Contributor Tamar Herman. “Korea wants to be that cultural influencer now, and they’ve been doing that very well, but every time there’s an international incident, that hurts Korean media.”

K-pop’s international influence has given South Korea a soft power that transcends political divisions with the North and its other regional neighbors. This is recognized by each nation, and this competition fuels the fire of existing tensions from Japan’s imperial domination of Korea, China’s claim on the South China Sea, and the North Korean regime’s aggressive tactics.

The mounting tensions have also made an impact on the artists. Recently, Tiffany Hwang, a lead vocalist of Girls’ Generation was caught in the crossfire. In an unlucky chance of timing, one of their concerts in Japan had coincided with Korean Liberation Day. At the time, Hwang posted a picture on Snapchat for thousands of fans to see, with a Tokyo geofilter at the bottom.

The geofilter design mimicked that of the Japanese Imperial Flag. Taking into account Japan’s imperial dominance over Korea from 1910-45, the flag’s symbolism struck the core of Japo-Korean historical tensions. Especially on the day of liberation, Korean fans took deep offense to Hwang’s post. She deleted the snapchat within three minutes, but it already caught people’s attention. As a result, Hwang lost many television roles and sponsorship deals.

“We have to look at the sharp division between political and historical aspects surrounding East Asia, and the economic and cultural dynamics of East Asia,” said Jung Bong Choi, Professor of Cinema Studies at New York University. “Japan, South Korea, China, and Taiwan are still hung up on the past, in terms of comfort women, territorial disputes, and more. The past, along with the emerging power of China, create a historical-political issue.”

Regardless, current fans of BTS, KARA, or BIGBANG don’t seem to let national hostilities prevent them from buying concert tickets. Thus, the cultural economy continues to thrive and disperse across international boundaries.

A Big Bang or Big Bang?

After the North claimed to have successfully tested its first hydrogen bomb in early 2016, the South Korean government blared K-pop across its border in response. In a tense standoff, songs like “Just Let Us Love” by Apink and “Bang Bang Bang” by Big Bang blasted into the northern airspace, mixed in with criticisms of Kim Jong Un and his nuclear program.

Why does pop music have any place in this situation? Well, various political implications could be interpreted from such nuanced lyrics. Big Bang lines like “Don’t move everyone, Don’t move. Let’s end this tonight, end this all // Yea we don’t give a what // Ready or not”  seem to say that the South will retaliate if necessary. Thus, simple K-pop songs leave the North overthinking the situation like you would overthink a text from your crush.

Over the past decades, K-pop has infiltrated North Korea through radio broadcasts, CD-filled balloons, and USB drives. Possessing any entertainment from the South is punishable by death in the North, but that hasn’t stopped the growing popularity of the entertainment black market. CDs and DVDs currently sell on average at $3.75. The North’s craving for South Korean entertainment has continued to expand, despite the country’s unparalleled cultural, political, and ideological isolationism.

Approximately 70% of North Koreans consume foreign media in their homes. The South is poking holes in Kim Jong Un’s strictly guarded barriers. The soft power that South Korea wields through K-pop has proven its success through aesthetic appeal. Through cultural influence, South Korea is can foster its agenda of reconciliatory politics. These effects aren’t quantifiable but undeniably offer political sway.

A defector known only as Min Jun reflects this North Korean hunger for South Korean media, stating, “in our generation, young people get together quietly in each others’ homes, put on South Korean K-pop on a speaker, and have a little dance party.” This example of minor infractions on North Korea’s ban reveals the gradual erosion in the government’s cultural isolationism. The North’s consistent exposure to a new world is the first step to collective action. It has created an awareness of their situation in comparison, planting seeds of discontent among the North Koreans.

However, the North Korean government has been unafraid to retaliate. It has publicly executed individuals for holding or distributing foreign media, consuming and distributing foreign media, claiming to have killed 80 individuals across 7 cities in one day. And still, the majority of North Koreans persist, taking the risk to get a taste of something outside of the North’s regime. The disparities in the Northern lifestyle are becoming ever more apparent.

The long-standing political conflict between the two halves is being steered through cultural means. K-Pop holds the power to familiarize Northern citizens with their Southern neighbors, stirring hopes among the people for reconciliation. In this seemingly never-ending military standoff, cultural understanding and assimilation is a breakthrough solution.

Northern citizens are able to contrast the music of their favorite artists up against the government’s propaganda attempting to dehumanize the South. Images of the South Koreans with devilish horns and aggressive mannerisms are being put up against colorful and flirty music videos of K-pop girl groups like KARA.

South Korea needs to continue utilizing this soft power as a means of cultural communication, as it may be the only way to infiltrate Northern boundaries. The North Koreans’ envy of the of the glitzy South Korean lifestyle seen in songs such as Psy’s “Gangnam Style” builds pressure on the government to satisfy desires for social change, possibly leading to a reunification of the Koreas. As South Korean President Park Geun-hye summed it up in her inauguration address: “In the 21st century, culture is power.”