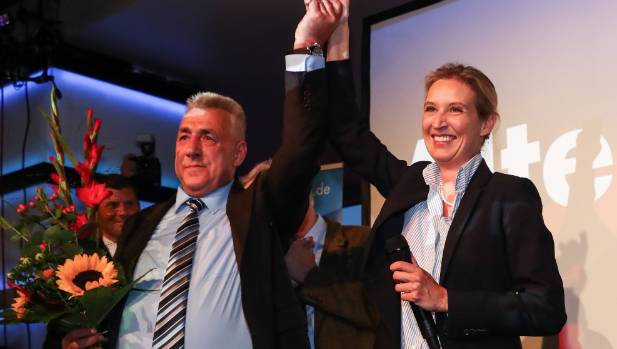 The Western world breathed a sigh of relief after the triumph of the young independent centrist Emmanuel Macron over Marine Le Pen, leader of the right-wing National Front, in the French presidential election. His victory was hailed as a sign that the emerging tidal wave of populism that had culminated in the Brexit Vote and Donald Trump’s victory had been held at bay.  Thus, when the 2017 German parliamentary elections came, there was little to no doubt that Merkel’s Christian Democratic Union (CDU) would win the majority and safeguard the EU’s stronghold against populism—after all, Germany, with its own 20th century history and many laws restricting free speech, had cultivated a national conscience repulsed by the allures of far-right rhetoric.

But just how immune is Germany from the right-wing ideology it has renounced so  many times after World War II?

CDU’s technical win was beset by a moral loss. While CDU won 32.5% of the vote, it will now have to share the Bundestag with Alternatif fur Deutsch (AfD), the first far-right party to win seats in almost six decades. AfD came in third after the Social Democratic Union (SDU)— polling at an unnerving 13.5%, and siphoning votes from the mainstream centrist and left-wing parties. It ran on a galvanizing populist platform that was all too reminiscent of Nazi rhetoric, championing the German dominant culture, and criticizing Merkel’s open border policy for Muslim refugees from Syria and Africa. Like Trump, AfD enjoyed the support of working class citizens of the rusting industrial sectors, who constituted the greatest share of its voting base, as well as young adults barely past voting age. Polls conducted by the German state TV indicated that 85% of AfD voters surveyed feared that the influx of refugees would endanger German culture and livelihood, and 82% believed that four terms of Merkel was enough.

Data released by Eurostat in 2015 reveal that Germany has taken the most refugees of all European countries– nearly one million. This unprecedented increase in racial heterogeneity will call into question Germany’s acceptance of Merkel’s Willkommenspolitik policies for asylum-seekers in the face of economic instability, which is ever so effective in stoking xenophobia. Thus, AfD may persist to become a sustained force in the Bundestag without shedding its xenophobic streak if Merkel and the mainstream parties cannot alleviate the pressing economic issues in Germany’s steel and diesel production sectors.

AfD’s electoral breakthrough means that the next three years will be of utmost importance in ensuring the dominance of current mainstream parties in the Bundestag.

Though Germany boasts the highest GDP growth in Europe, there are plenty of impending economic obstacles on Chancellor Merkel’s plate. In a study conducted by the German Institute for Economic Research, 40% of Germans do not earn enough for future savings. The study also indicated that the 40,000 people that constitute Germany’s top 1%, a fifth are billionaires—meaning that income inequality has increased. In addition, within the next three years of her term Merkel must work with the Bundestag to ease the planned national transition from combustion to electric engine use without completely gutting the ailing steel, diesel, and car industries, which hold almost a million jobs.

Short-run economic woes during Merkel’s term can culminate in a political realignment away from mainstream parties to AfD. This could grant AfD electoral persistence after, if not during, Merkel’s current term. Legislation, if ineffectively designed and enacted, may result in immediate high losses sustained by these industries that will increase unemployment and thus income inequality. If that is the case, AfD may not need to significantly moderate its anti-refugee rhetoric to work with other parties. Instead, it could capitalize on the failure of mainstream parties to prioritize the prosperity of native Germans over philanthropy for nonnative refugees and gain enough traction to become a majority in the Bundestag in the years to come.

However, AfD’s contemporary counterparts overseas, such as the UKIP and Finland’s Finn’s party, are considered too disorganized to consolidate a formidable, coherent faction in the national parliament and ultimately devolve into opposing moderate and extremist camps. This was also the case for populist radical-right parties such as Die Republikaner and the German People’s Union in 1990s Germany. The question is, would AfD share the same fate?

Founded as a Euroskeptic party by economists disgruntled by Germany’s bailout of Greece in the EU’s fiscal meltdown, AfD first began to echo the xenophobic nativist and anti-Islam rhetoric of other European far-right parties during televised debates in 2015, presumably to launch its campaign for the 2016 regional elections. Support for the party rapidly rose– according to Germany’s public international broadcaster Deutsch Welle, it had eroded CDU’s majority in two regional elections and won seats in 9 of 16 regional legislatures by September 2016. But unlike contemporary far-right parties, it’s formulated coherent plans to substantiate its claims. The elder of its two co-leaders, Alexander Gauland, invests heavily in nationalist ranting, while his younger counterpart, economist Alice Weidel, tempers his xenophobic comments to court cosmopolitan citizens who might be put-off by his Nazi-esque wordplay. She proposes that limiting refugees to those with higher education levels would boost domestic productivity and ease the strain on Germany’s institutional resources which must, first and foremost, serve native Germans.

The two differing campaign strategies reinforce one another, meaning that party unity may in fact be quite strong. They converge to consistently preserve a central message—that the Muslim refugee population of over 1 million must be contained. Regardless of whether the party spewed fascist rhetoric just to get more votes or truly plans to implement radical policies, its leaders have uniformly strong convictions to exert sustained pressure against the dominant parties and partially undo what Merkel has done in her past four terms — namely increasing Germany’s fiscal responsibilities in the EU and increasing refugee inflow.

But even if AfD splits into sub-factions, it’s still the third largest party in the Bundestag. Its entry into the parliament alone means that mainstream parties have lost seats and votes. Party systems will become increasingly fragmented—the parliament would be dominated by a few medium-sized rather than big parties. In this environment AfD could become highly influential in legislative passage like the UKIP was on the Brexit Referendum, even if it holds just 10-15% of votes.

This is not to suggest that a German equivalent of Brexit is inevitable. Regardless of the state of its unity, AfD’s platform and Euroskeptic stance put it at odds with Merkel and all that she stands for. At the very least AfD would still be an obstructive force to the plans of the Social and Christian Democratic Unions. Being the firm chancellor that she is, Merkel has pledged in her most recent press release to address the needs of working class voters who turned to AfD and commented that she will not make concessions to the far-right party that will diminish Germany’s multiculturalism and role in the EU. One thing is for certain—her job has only gotten harder.