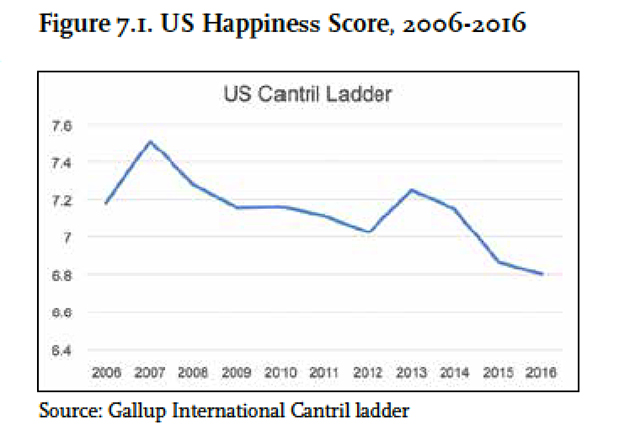 Is It Time To Rethink the Economics of Happiness?

Underpinning the nation’s mixed economy is the well-reasoned belief that more money equates to greater happiness. Unfortunately, 2017 has proved this finding deceiving. As wages continue to rise, “National Happiness” has not blossomed, but languished.

As the United States is confronted by an increasingly dissatisfied populace, politicians across the nation are scrambling to assuage their constituents’ collective anguish. For centuries, the U.S.’s solution to a less-than-congenial society was greater economic stability. As such, economic policies aimed at improving national standards of living were understood as the accepted panacea. The great trauma at present, however, is that improved standards of living have not dulled the nation’s despair.

As GDP booms and happiness regresses, an important question emerges. Is it time to rethink our nation’s philosophy toward alleviating national misery? Even for some economists, the answer is an emphatic “yes.” In the early 1980’s, Amartya Sen confounded international policy makers by suggesting that GDP was a largely insufficient metric for gauging national well-being. Instead, Sen pioneered a new approach – Capability Theory. Sen’s new metric was defined by “its choice of focus upon the moral significance of individuals’ capability of achieving the kind of lives they have reason to value.” In plain-speak, Capability Theory measures how “capable” a given individual is of attaining “valuable beings and doings,” such as a healthy relationship or a fulfilling job. The logic behind Sen’s thinking is that an improved standard of living is not always an appropriate predictor of national well-being.

Sen is in good company. Many of his contemporaries – including the likes of Clair Brown and Thomas Piketty – have similarly critiqued the longstanding “market-myopia” of American policy makers. These thinkers evolve Sen’s considerations and speculate that the modern economy has reached a point at which the average American’s Salary to Happiness Ratio is nearing its ceiling. A recent study by Princeton Professors Daniel Kahneman and Angus Deaton may add credence to these considerations.  After sampling 450,000 American households with varying income distributions, the duo concluded that “happiness did not rise after a household reached an annual income of approximately $75,000.” While the result may have surprised policymakers, the conclusion was rather banal for Psychologists like Elizabeth Dunn of the University of British Columbia. Scholars like Dunn have long surmised that increases in material well-being yield diminishing returns over-time. As citizens undergo a “Hedonic Adaptation” (a fancy word for one who is never satisfied with their material lot, so to speak), they are increasingly numbed to improvements in average income. Even for those confronted by a sudden increase in disposable income (i.e. lottery winners), long-term changes in happiness are mediocre at best. Humans, it seems, are quick to adapt to new found financial success – no matter how exorbitant it may be.

For policymakers struggling to cure national angst, the finding may also have broad-based implications for public expenditure. This is of course not to suggest that anti-poverty legislation is no longer applicable; indeed, for the poorest rungs of American Society it still proves fairly efficacious. Rather, such findings might behoove lawmakers to seek an alternative and possibly more applicable means of promoting the “general welfare” enshrined by our Constitution.

Maybe it is time to turn inwards. After all, there is a dense body of research that suggests remedying mental health is the key to ameliorating anguish. A recent study by the Ernesto Illy Foundation on Sustainable Development confirms these suspicions, noting that in “three rich countries” (India, Pakistan, and the U.S.) surveyed, “mental health, not poverty, was the strongest predictor of misery.”

Of course, this would seem sensible. After an itemized income point, “happiness” and its more concerning twin “anguish” are largely a product of non-economic factors such as familial ties, personal freedom, and personal values. Thus, it seems that if policymakers truly wish to provide some form of relief, then they may have to consider expanding the gushy programs that target our nation’s internals.

Such a suggestion is apt to make many politicians cringe. The notion that most lawmakers would divert public funds (much of it pork-barrel spending) and direct it toward something as intangible as “mental health services” is tantamount to political heresy – hence the meagre sum allocated toward mental health care. Yet, investing in mental health services may be a promising consideration. The Economist – drawing from the above study – observed that in Britain, “investment in care for mental illness provided the best return (as measured by happiness gains) on public expenditure.” Specifically, the report concluded that “relieving one person of misery in Britain by reducing poverty would cost £180,000 ($222,500), whereas achieving the same goal by treating anxiety or depression would require just £10,000.” In theory, a robust mental health service system could offer an easy way of hampering despair without breaking the federal piggy-bank.

Cue the new federal budget, which seems all-too-keen on slimming down spending on these very same services. In particular, the proposed budget aims to eliminate many essential health benefits (including mental health care provisions) currently provided under Obamacare. The conservative justification for the cut rests on the belief that mental health services are a private matter, much the same as abortion services. The problem with this thinking is that it fundamentally ignores the slew of profitable economic payoffs achieved by a more psychically-intact citizenry. Unlike modern Anti-Poverty Programs, mental health services are proving adept at boosting worker productivity while simultaneously halting common impediments to satisfaction like depression and anxiety.

On average, the modern age been quite effective in providing consistent improvement to material well-being. In the face of such progress, it has been easy for lawmakers to assume historical precedent and conflate “happiness” with better standards of living. Sadly, the correlation between the two has plateaued. While it is unlikely (and frankly impractical) to consider overhauling Washington’s current outlook, it may be high-time to consider divesting into a brainier alternative.