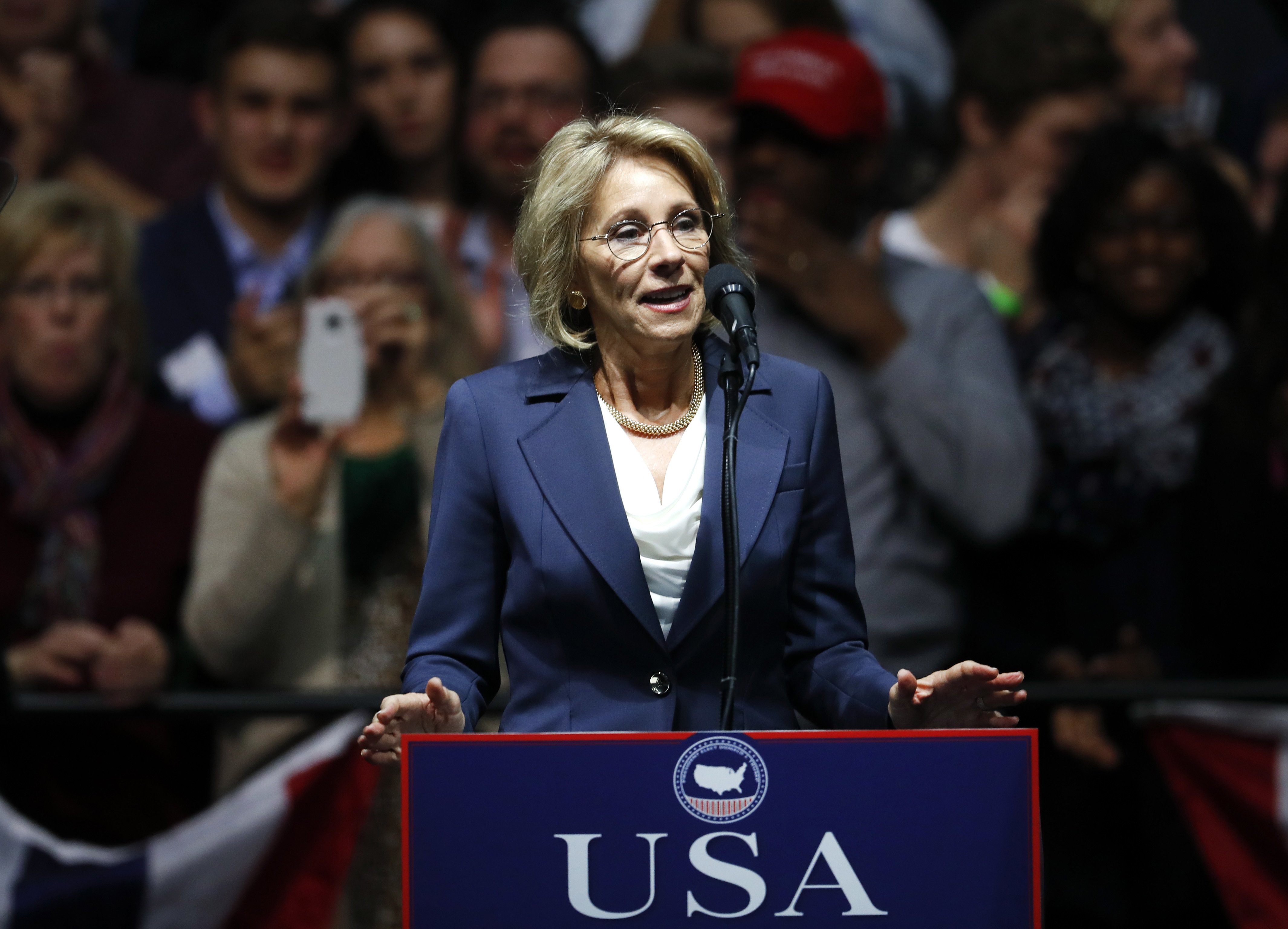 How politics and campaign funding affects the future of school reform

“If confirmed, will you insist upon that equal accountability in any K-12 school or educational program that receives federal funding whether public, public charter, or private?” asked Senator Tim Kaine.

“Equal accountability for all schools that receive federal funding?”

“Do you not want to answer my question?”

After a contentious overnight Senate hearing, Betsy DeVos was confirmed as Education Secretary by a 51-50 vote, with Vice President Mike Pence breaking the tie, the first ever for a cabinet nominee, on February 7. DeVos gained fame within the education community by advocating for state and federal governments to expand school choice programs and will likely continue to hold this position as education secretary.

These programs give families vouchers, worth the approximate amount that the government spends on each student through public schools, and allows them to redeem them at any school. Students can redeem vouchers for exact cost at their local public school, or they can supplement the voucher with their own funds to pay for tuition at a private school. The main idea is that a market-oriented system for education should ensure both that schools become more accountable and that children have access to the education that is right for them. In theory, students are able to choose the schools that align with their learning style and academic interests, and schools are financially motivated to strengthen their education programs, lest they risk losing students to other schools.

The efficacy of these programs is widely debated, with each side citing several studies to claim victory. For now, they are mainly instituted at the state level, with each state setting its own rules and standards for when and how vouchers can be used. The president’s education plans currently include giving states block grants that they will distribute to their poorest children in the form of school vouchers. Trump’s stance on school choice stands in stark contrast to that of the Obama administration, which neither expanded nor contracted funds for voucher programs.

The future of school choice programs in the United States is growing increasingly tenuous because of how politicized the matter has become. The fight pits libertarians and the religious right (proponents) against teachers unions and groups empowering socioeconomic minorities (critics). The proponents have historically been aligned with the Republican Party and the critics with the Democratic Party, meaning that the fate of these programs largely depends on which party holds the White House, because the executive branch sets priorities for block grants to the states.

Libertarians tend to support the programs because they enforce a market system on K-12 education, a “good” that the government typically offers for free. A traditional public school system essentially forces students to attend the school closest to them, but a voucher system would let families allocate their money towards education in any way they choose, conforming to the libertarian philosophy that individuals choose the options best for them when given the freedom to do so. In fact, Ronald Reagan was one of the first prominent advocates of school choice in 1983, as part of a wave of libertarian policies during his administration, including substituting federal housing and healthcare spending with similar vouchers. Eighteen years later, the Bush administration formally instituted school choice by allowing eligible students to transfer from schools that failed to meet certain criteria and expanding state grants to implement voucher systems in the No Child Left Behind Act. These programs did not expand under Obama, even though his education secretary, Arne Duncan, strongly advocated for school choice; the president tackled accountability issues through Common Core standards instead.

President Trump’s advocacy for school choice follows the traditional Republican mold – Education Secretary Betsy DeVos has long pushed for state and federal governments to adopt school choice programs. She previously chaired the Alliance for School Choice, a nonprofit organization that pushes for voucher programs and tax credits for public school education. DeVos clearly has the president’s ear too – he explicitly asked Congress to pass an education bill that funds school choice for “disadvantaged youth” in his joint-sessions speech in February. Trump has not announced the scope of these potential programs, but mentioning them as one of his 2017 agenda items indicates that he intends to prioritize them, as he did not stress education initiatives during his campaign.

DeVos represents another large faction that supports school choice programs – the religious right. Most states allow families to use vouchers at religious schools, essentially redirecting public funds to religious organizations. The Supreme Court confirmed the legality of these programs in Zelman v. Simmons-Harris (2002), a case that arose when Ohio taxpayers sued the Cleveland school district after eligible families used vouchers mostly for religious schools; the Supreme Court ended up ruling in favor of the school district. Given that a majority of American religious schools are Christian, the interests of these programs tend to align with those of the highly Christian religious right. Because state and federal governments have little control over the curricula at private schools, this decentralization of education allows for schools to push a religious agenda. For example, several states have passed legislation banning creationism from being taught in science classes at public schools, but religious schools, which can accept students with publicly-funded vouchers, do not face similar restrictions. DeVos herself has referred to school reform as a way to “advance God’s kingdom” and said that it would lead to “greater kingdom gain.” With interviews on Christian talk radio programs during the campaign and appointments of Christian-minded politicians such as Jeff Sessions and Mike Pence during his transition, Trump has made progress in winning over the religious right (after alienating the group to a degree with comments and leaks during his campaign), making the prospect of executive decisions that benefit these groups even more likely.

President Obama, on the other hand, had strong support from organizations supporting the rights of socioeconomic minorities and from teachers unions, two groups that tend to advocate against school choice. In contrast to the existing school systems, in which students attend the school they are geographically zoned to, voucher programs greatly expand the range of schools they can attend, allowing for groups of people to congregate in specific schools. Some argue that access to more schools increases the possibility for racial segregation and can therefore widen achievement gaps between races if some schools are academically superior or receive more government funding. In addition, under these programs, the government often distributes vouchers equally across all eligible students rather than specifically to neighborhood schools, even though schools in low-income neighborhoods often need more funding to undergo necessary improvements and upgrades. These programs, therefore, disadvantage children in these neighborhoods who may have to continue attending their local schools due to financial or transportation constraints. Even further, low-income families tend to know less about the extent of voucher programs due to time and network effects, according to a 2009 study in the Peabody Journal of Education, and private schools tend to be less prevalent in low-income neighborhoods, often leading these programs to actually exacerbate existing inequality.

Critics attack the idea that a “market system” enforces accountability through financial incentives by claiming that the lack of federal oversight over private schools limits the extent to which the government can mandate curricula and educational standards. Teachers unions tend to campaign against these programs, therefore, because of the lack of support that they offer to educators. The National Education Association, the largest labor union in America, argues that vouchers do not give equal opportunities to all children and that if implemented, they should only be allocated to low-income families. Campaign contributions from teachers unions overwhelmingly support Democratic politicians, making the party inclined to adopt anti-school choice platforms. It’s no coincidence that two Republican presidents this decade pushed for school choice, while the one Democratic president did not.

The argument over school choice is just one instance of the ever-present debate over the degree of centralization in the federal government. But with small-government and religious conservatives gaining a stronger voice in the Republican Party, and socioeconomic minorities and union groups doing the same in the Democratic Party, education reform has become a more important topic in each party’s platforms. With her experience in school choice advocacy, DeVos has become the right’s biggest voice in education reform, setting precedents for the future of America’s education policy. But because education has become a priority of the Democratic party too, potential liberal leadership in 2020 or 2024 could undo DeVos’s work, leaving the fate of these programs always changing. With each party now assuming a stronger stance on education, school choice may forever ping-pong between what each party wants, never settling on a definitive position in American politics.