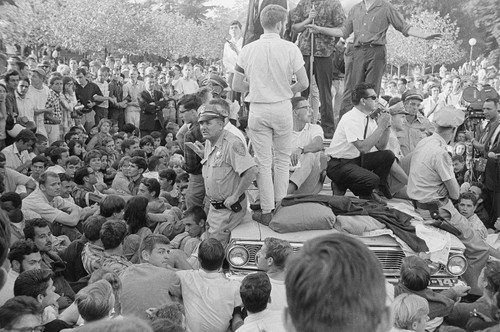 I was walking past People’s Park when I heard an elderly resident remarked remarked at my tie-dye shirt I was wearing, “You know, it takes more than a tie dye shirt to be a hippie.” This decidedly Berkeley take on the whole being greater than the sum of its parts is as relevant a political critique as ever. In an age and political atmosphere where cursory glances masquerade as research and feelings have become facts, staying attuned to your arithmetic and measuring what makes that whole truly whole has never been of greater priority. Should Milo have been allowed to speak is a whole debate unto itself. I’m concerned with the label attached to Milo, Berkeley College Republicans and their crew. “The New Free Speech Movement,” they call themselves. In civil arguments, it’s important to who you arguing against, who they are and what they represent. We aren’t arguing against a new Free Speech Movement. Just because your event is loud, causes controversy, and happens to have some speech involved does not make it part of the FSM. The sum of the components on February 1st don’t represent the whole that is the FSM.

There are debates to be had about methods of protest, the extent of what constitutes free speech vs. hate speech, University policy etc. Likewise, there is room to critique what can sometimes feel like monolithic campus politics, but let’s not forget what is actually referenced when pundits, provocateurs and protestors alike refer to the Free Speech Movement (FSM). FSM was grounded in a demand to allow political discussions and debate to be displayed on campus during a time in which the University was supposed to be sterile of politics. The Cold War was alive and well when the FSM occurred. Any professor or student who critiqued dominant discourse was socially shunned, likely fired and added to FBI blacklists. God forbid anyone dissent, much less offer an alternative modernity to that of post-war military industrial complex America. There is a stark difference between having your beliefs be subject to constant debate and having the public expression of your beliefs banned.

The Free Speech Movement itself was not a quiet affair. On the contrary, it was a movement centered around disruption and protest. Inviting a provocative speaker to campus then decrying any sort of student or faculty opposition is in no way an authentic representation of a movement built upon dissent. Unlike student protesters of 1964, who by the order of the Dean of Students were banned from using Sproul Plaza to organize support for “off campus political and social action,” today’s students enjoy what by the standards of the ‘60s looks to be an almost luxurious amount of speech. Dissent and struggle over ideas, even when this dissent boils over and may be embroiled by the acts of “ninja-like” infiltrators, is inherent to the Free Speech Movement. Police action on Sproul, especially police action in response to student protest, is nothing new. The Free Speech Movement began when thousands of students blockaded a police squad car from arresting a Cal alum Jack Weinberg For 36 hours.

Political groups of today who claim they are “the new Free Speech Movement” share nothing in common with those they seek to imitate. The Free Speech Movement represented a bulwark of and a jumping off point for the new left. Simply put, The Free Speech Movement wasn’t about being able to say whatever you want when you want to; rather, it was the organized left on the college campus. They were freedom riders, anti-war protesters, the substrate for what would become hippies; most were just concerned students and faculty.