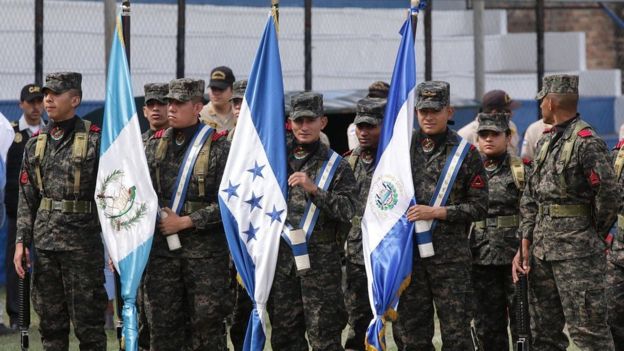 The Long Road To Peace In Central America

Can Honduras, Guatemala, and El Salvador Band Together to Banish the Gangs?

In November 2016, the three Central American countries of Guatemala, Honduras, and El Salvador announced the establishment of a multinational taskforce to combat gangs and cross-border violence in the region. The three form Central America’s “Northern Triangle”, a region that often appears in global headlines only for its dramatic homicide rates. Languishing in a cycle of gang violence for the better part of the last decade, Honduras, El Salvador, and Guatemala are now attempting to turn over a new leaf in their long-running struggles with organized crime.

15,809 people died in the Northern Triangle in 2016 due to homicides. El Salvador and Honduras have the first and third highest homicide rates in the world, at 104 and 56.74 per 100,000 deaths in 2015, respectively. Criminal gangs, known locally as pandillas or maras, are engaged in deadly struggles with the state and with each other for the control of territory and an increasingly lucrative drug trade. The region is home to the worst homicide rates outside of any warzone, with similarly high rates of other violent crime. Extortion is the primary business of the transnational maras, making the control of territory paramount. They contend neighborhoods and cities primarily with each other, pandillas — local gangs — and the police. Drug trafficking is an increasingly important activity for transnational organizations like MS-13 and Barrio 18, and Mexican cartels have moved up to 90% of their drug trafficking operations southward to the Northern Triangle in recent years. The region is no longer a transshipment point and has become a vital center of operations for the Sinaloa and Gulf cartels, among others.

The maras are a relatively recent phenomenon in the history of Central America. As El Salvador and Guatemala emerged from long and brutal civil wars in the 1990s to establish nascent democracies, U.S. authorities stepped up deportations of thousands of Honduran, Salvadoran, and Guatemalan criminals from American prisons to the three countries in the region. A large population of unemployed young men, combined with an abundance of weapons and the influx of hardened criminals, created a conducive environment for organized crime to flourish. Two major gangs first formed in the prisons of Los Angeles in the 1980s — the notorious Mara Salvatrucha (MS-13) and Barrio 18 — quickly took root in the home countries of their founders, primarily El Salvador and Honduras. They were soon followed by a proliferation of smaller gangs, sparking a series of turf wars that intensified in the 2000s as their power grew.

The first response of regional governments was a militarized crackdown called Mano Dura, or “Firm Hand”. Beginning in around 2003, the authorities in Honduras, Guatemala, and El Salvador began to arrest thousands of people suspected of belonging to gangs, even on the grounds of particular dress or tattoos indicating membership. Soldiers were deployed to the streets to aid beleaguered police forces in the fight against organized crime. All three countries passed harsh laws allowing the police to intensify raids and arrest people on even the slimmest suspicion of gang membership. While these policies persisted through various administrations in Honduras and Guatemala, they led to a backlash in the courts in El Salvador.

In 2004 El Salvador’s Supreme Court struck down the country’s Mano Dura law as unconstitutional, and violence rose as the more powerful gangs like MS-13 increased their attacks on civilians and the police. Prisons overflowing with inmates across the Northern Triangle came under the control of the gangs themselves, defeating the original purpose of Mano Dura initiatives. Gang members took advantage of porous borders within the region to seek refuge abroad, with Guatemala seeing a surge of gang activity similar to its neighbors that it had not experienced before. A truce between MS-13 and Barrio 18 in El Salvador in 2012, negotiated by the Salvadoran government, led to a 40% drop in homicides that year and to lower crime rates overall. The deal unraveled in 2015 due to government opposition and a loss in popular support as gangs were perceived to have gained political capital and legitimacy during the truce, despite positives like the reduction in crime. The gang war in El Salvador has since intensified, with the judiciary now targeting officials who helped negotiate the truce.

The failure of iron-fisted policies like Mano Dura and state-gang negotiations like the truce in El Salvador spurred unprecedented collaboration between the authorities of Guatemala, El Salvador, and Honduras. A transnational problem can only be tackled across borders, and exclusively local initiatives will not suffice to eradicate the epidemic of gang-related violence. The ongoing violence gravely stunts the economic growth of the three developing countries, with the Inter-American Development Bank estimating it costs the Northern Triangle over 6% of regional GDP.

The multinational taskforce aims to piece together the disparate national policies into a coherent fight against organized crime. Composed of soldiers and policemen from all three countries, the 1,500-2,500-strong force will patrol borders and target the estimated 70,000 gang members in the region. The force will operate solely along borders and prioritize dismantling the growing narcotics and human trafficking trade, aided by a new international warrant system that makes an arrest warrant issued by any of the three national governments valid in all three countries. This aims to expedite the notoriously corrupt criminal justice system in the region, already a focus of internationally backed anti-corruption campaigns in Guatemala and Honduras.

“It doesn’t seem that there will be significant changes under this new model,” says Henry Campos of the Central American University, formerly Deputy Minister for Justice and Security in El Salvador. “The taskforce aims to unite very disparate security forces, including in the level of criminal infiltration, from countries where there has been little interest in strengthening their power to investigate crimes.”

It will be difficult for the taskforce to effectively pursue its mandate if it is stymied by criminal infiltration or by a widespread lack of professionalism. “The taskforce will have limited impact, if any, while it further militarizes security issues and provides window dressing for the corrupt and dangerous governments of Honduras and Guatemala,” says Dr. Dana Frank, a Honduras expert at the University of California, Santa Cruz.

As long as the response to gang violence remains highly militarized and run by inefficient and corrupt national governments, even transnational approaches to the problem are doomed to fail. The United States under the Obama administration sought to aid local governments by providing financial aid and supporting local anti-corruption initiatives like the United Nations-backed International Commission against Impunity in Guatemala (CICIG) and the Support Mission against Corruption and Impunity in Honduras (MACCIH), supported by the Organization of American States (OAS). Under the Alliance for Prosperity Plan in the Northern Triangle of Central America (APP), the U.S. disbursed $97.9 million to the three countries in 2016 for economic development and projects to foster democracy and governance. The plan emerged as a response to the mass emigration of Central American refugees to the United States in 2014-15, fleeing violence to seek a better life further north.

Simply throwing money at local authorities will hardly resolve the underlying issues of corruption and militarization. “The United States should immediately suspend all aid to the Honduran police and military — including equipment and training — and to the Honduran government until it address the security forces’s terrifying human rights record and ongoing impunity,” says Frank.

The MACCIH in Honduras was established to forestall a more powerful UN-sponsored commission modeled on the successful CICIG in Guatemala, and it remains unlikely the OAS-backed commission will be able to root out corruption in the country. “The MACCIH has few powers and shows no indication of being willing to take on well-documented criminal activity by the president and top figures in Congress,” says Frank. “It’s not addressing the continued presence of human rights abusers at the top level of the Honduran police.”

Ultimately, the transnational initiatives will only bear fruit if governments invest in policies to eliminate corruption and impunity and provide economic opportunities for their citizens. “Governments have to increase their control of national territory in all senses of the word, as in not just physical security but also in the provision of basic services and social integration,” says Campos. “Northern Triangle countries must permanently strengthen their institutions if they are to defeat transnational gangs.”

The multinational force is a step forward in providing an integrated regional response to the maras, but its success largely rests on the competence of national and local authorities that are in some cases in collusion with organized crime. While Guatemala has made strides in rooting out corruption in its political system under CICIG, the same cannot be said of El Salvador and Honduras. Transnational initiatives against organized crime are welcome news in the beleaguered Northern Triangle, but national governments must combat corruption and promote development at home for these to be effective.