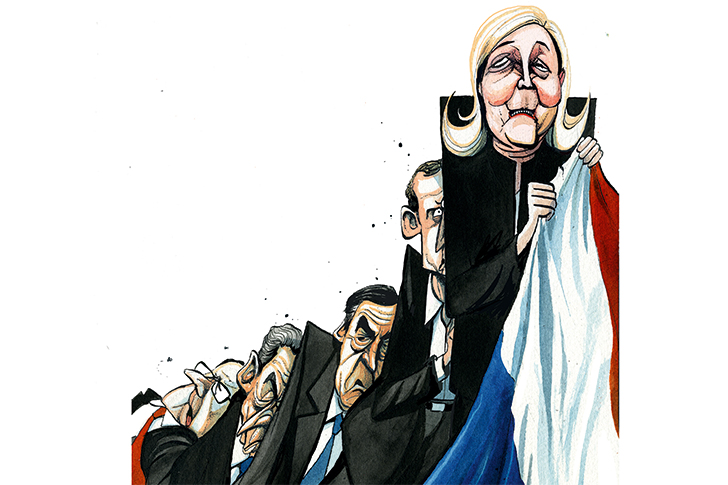 A conservative wind is sweeping through the so-called Western liberal democracies- staunching liberal reform and creating a political conversion of protectionism intertwined in a nationalistic discourse. France has proven no exception to this political trend. In the wake of the April 23 presidential election, two populist candidates- Marine Le Pen and Emmanuel Macron are leading the polls. The French political system will, however, be ill-equipped to reflect the populist views of the voters in this particular election as the current constitutional makeup inhibits unestablished party actors to enact their intended policies. Moreover, it ascribes an excessive amount of power to the president by granting an executive privilege to dissolve the parliament, a ‘tool’ that could potentially bring about a parliamentary crisis in this particular election. The French political system must thus accept the changing political landscape and embrace constitutional reform before the popular discontent deteriorates further.

When citizens feel their economic and social expectations are not being met by the politicians, they often lose trust in established political actors and institutions and become more susceptible to populist alternatives.

Indeed, the socioeconomic situation has deteriorated for the average French citizen, leading a majority to reminisce over the “trente glorieuses”, the prosperous years 1945-1975. Today’s reality appears gloomy in comparison. Soaring unemployment rates of 10 % on average testify to the urgency of labor market reforms to cure the current system- contaminated by undynamic regulations biased for prime aged labor market insiders, is placing both employers and workers in a deadlock.

A more abstract concern, notwithstanding a crucial one, is a general political anxiety of the decline in France’s power in the world, both economic and geopolitical according to UC Berkeley Professor Jonah Levy. The grandeur France embodied in the cold-war era has been reduced to a nostalgic memory. This declinist path has evoked a type of identity crisis of France, resulting in an aching want for change- explaining the increased support for anti-establishment options across the political spectrum. The French expressed their discontent in a blatantly clear manner when incumbent President Hollande’s approval rating hit a historical low of 15 percent in the fall of 2016. In response to these stinging numbers, Hollande, as the first ever president, turned down his candidacy for a second term.

Instead, two candidates leading the polls for the presidency, albeit fundamentally different, are anti-establishment in the sense that they both are ‘outsiders’ to the mainstream political parties. Marine Le Pen is (in)famous for her party’s commitment to a massive reduction in legal immigration, the appeal for a “Frexit” and an ardent nationalist and protectionist discourse. On the contrary, Emmanuel Macron, the eclectic former minister of finance representing his center-left movement En Marche! promises to bridge the left-right gap though pro-market liberal reforms as well as maintaining the extensive welfare program.

Both of the candidates are solemnly swearing to deliver change to their voters. But neither of them will be able to do so in the current political system that is uniquely ill-equipped to deal with a shifting political landscape.

The current electoral system makes third party agenda in parliament particularly hard to push through because of its constitutional design. The so-called hybrid system features proportional representation while electing the parliament, made up of multiple parties, but the presidential election resembles a majoritarian system with a runoff between two candidates only. Since the birth of the 1958 constitution, the so-called 5th Republic, the mainstream left; Le Parti Socialist and the mainstream right; Les Republicains, have altered the presidency. Thus, the system has de facto operated as a two party, majoritarian system until now. A President without a popular mandate in the parliament will be heavily constrained while trying to push through policy. This will be the case for both Macron and Le Pen; they will be unable to effectively enact the change demanded by the voters. A situation like this, in which the President and the Parliament have different political persuasions, is called cohabitation and has occurred in the past, ultimately granting the prime minister, not the president, the most power.

So if cohabitation has been the case previously, why is it a particular concern in the 2017 election? The populist wave in Europe needs to be addressed and mitigated by enacting change. Failure to accommodate change will most likely result in an amplification of the popular discontent, and be perceived as an undermining of the democratic system. A pervasive atmosphere of distrust in must be eradicated before it intoxicates the politics and public discourse further.

An additional pivotal crux of the French hybrid system is the executive privilege held by the president to dissolve the parliament at any time. With two major parties altering the presidency, the incentive to exercise this is reduced, with the shadow of the future in mind, where this practice could potentially backfire in coming terms. However, in the times of populism, this tool could directly counteract the very justification behind checks and balances to maintain stability in politics. A president unable to push through agenda because of no mandate in parliament could use the executive power as a disproportionate bargaining chip, rendering the parliament vulnerable and volatile. Especially critical is a situation with an extreme right candidate, such as Le Pen. The reason being that if the executive presidential power is concentrated far out on the ideological spectrum compromises regarding her policies can be hard to reach in the parliament, and she could potentially continuously dissolve parliament until an accord is struck, leaving the parliament powerless and unable to serve its representative purpose.

The 2017 presidential election will be a pivotal point in French politics that will, more than anything, demonstrate the dire need for France to overhaul its political system. Even though the popular vote goes to a candidate who campaigns to stir up the seemingly dormant French politics, the status quo system will heavily constrain the president elect’s ability to enact populist change. The presidential power was established in a post-war era with an executive president to serve as a single unifying figure, in modern France. However, politics needs compromise to bridge the increasing gaps in the french society. For that reason, the presidential power should instead be transferred and concentrated in the parliament. This would create one decisive and resilient institution, under which parties are able to form coalitions to address salient issues across the political spectrum. Pushing constitutional reform is, however, a cumbersome and tedious process, and will be a reluctant measure to take by those benefiting from it.

Another possible ‘solution’ to avoid a potential crackdown of the political system is for Fillion, the mainstream right’s candidate to win the election – despite having suffered a hefty drop in his popular support after media leaked a paycheck to his wife and daughter for work never performed. If Fillion’s campaign would recover, he could possibly siphon votes from Le Pen and Macron by adopting crucial campaign promises that each of them holds. By maintaining the same old run, a mainstream right government could potentially stabilize the political whirlwind sweeping through France, but it would most likely just be a matter of temporarily mitigating the symptoms of an impaired, obsolete political system.