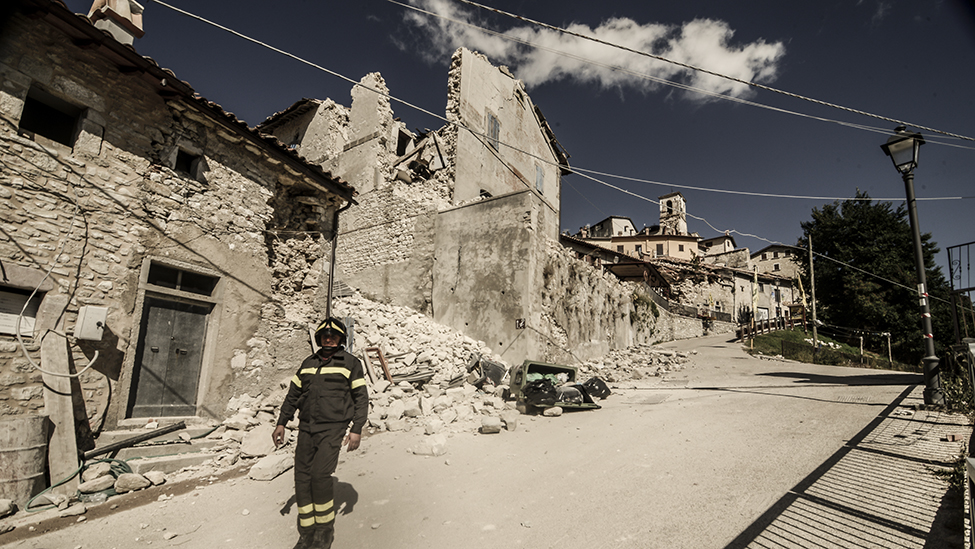 Central Italy is still reeling from a string of powerful earthquakes that rocked the region in late October. Dozens of hilltop towns were flattened, dealing further damage to communities already emptied by a grinding economic recession.

Many villages were razed and almost 50,000 were displaced in the regions of Marche and Umbria, a picturesque expanse of hills stretching west from the Adriatic Sea. An unprecedented cold wave this winter isolated entire communities and caused lasting damage to this mountainous area straddling the Apennines. Home to 2.4 million people and an export-led industrial economy, the regions are yet to recover from the 2008 financial crisis.

Manufacturing fell by 25% from 2008 levels in Marche, putting several small manufacturers out of business in a region where 70% of people work in industrial districts. A construction boom abruptly ended when the financial crisis struck, bursting a long-running property bubble and contracting the property market by almost 80%.

“Thousands of small and medium-sized construction firms disappeared after the crisis, creating a knock-on effect that put other firms and workers in their supply chains out of business,” said Giulio Diotallevi, a local businessman.

Marche and Umbria are dotted with industrial districts catering to diverse sectors, from an aerospace hub to major fashion brands. Many firms reduced their local footprints or shuttered factories altogether in the years of the recession, and foreign companies like American multinational Whirpool bought stakes in struggling local competitors including appliance manufacturer Indesit.

Exports account for 72% of provincial GDP in the province of Ascoli Piceno, the closest to the epicentre. Changes in global trade like the European Union’s sanctions on Russia hit export-dependent areas hard, but some local firms have been able to quickly adapt to changing trends and shift from one emerging market to another.

“We must differentiate between a brief, cyclical effect like Russia and a long-term structural effect like competition from China,” said Professor Giorgio Calcagnini of the University of Urbino. “Regarding the cyclical effects, the firms in the Marche and Umbria have always had a great ability to exploit the opportunities presented by emerging markets.”

The region’s prominent fashion industry responded to increased competition from China by targeting the luxury market. The agricultural sector, another large employer in the region, experienced significant growth after the crisis.

Over 11,000 small businesses suffered damage from the recent earthquakes, and the road to economic recovery in this beleaguered corner of Italy is still fraught with challenges. For businesses in the earthquake-affected area, the process of rebuilding will be even more painful. “We’re living an emergency in Marche and Umbria,” said Calcagnini.

The Italian government has pledged 7.8 billion euros in emergency reconstruction funds for the earthquake zone. Italian shoemaker Tod’s announced it will open a new factory in Arquata del Tronto, a town levelled by an earlier quake last August that killed 299 people. If a sophisticated, export-led industrial economy could blossom here before financial crises and violent tremors tore it apart, locals are convinced they can bring it roaring back to life.

“I’m sure that for many business owners, this could be an opportunity to rebuild with that characteristic Marchigian determination,” said Calcagnini.