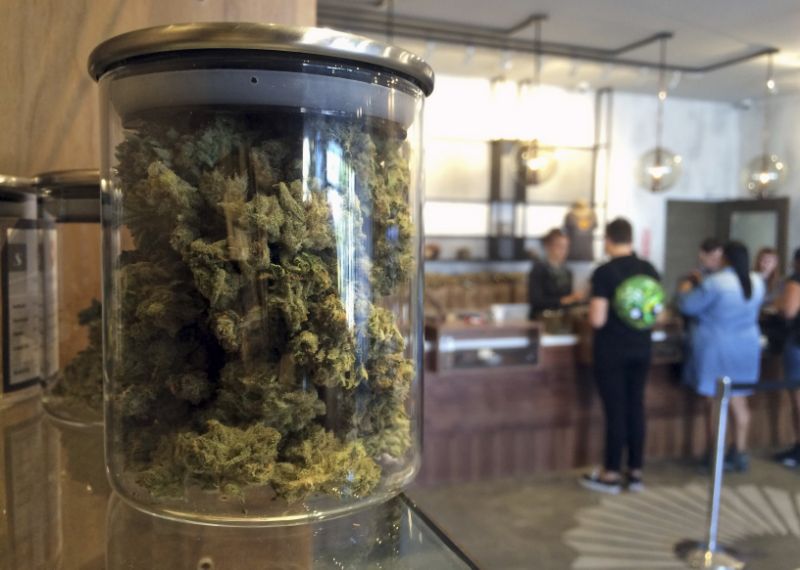 Customers line up at Harvest in San Francisco, one of the businesses which seeks to change the face of marijuana within California. (AP Photo/Haven Daley, File)

The fire in Big Sur won’t be the only thing burning this year; The Adult Use of Marijuana Act 2016 (AUMA), also known as California Proposition 64, passed on November 8th, with over 56% of Californians supporting legal cannabis. California voters, as well as those in Nevada and Massachusetts, reflect a national change in popular opinion towards marijuana. The passage of Prop 64 will usher in a number of important changes into California State law as well as day to day life in general.

Marijuana in California has for sometime been stuck in a liminal legal and social space. Accepted as a gateway drug by some, a critical ingredient in popular culture for others and, for a growing number of Californians, a part of daily life, it is quite possible 2016 is the tipping point for the popular perception of marijuana. A change in California state law as well as the substantial expansion of an already-existing marketplace will have long-lasting cultural implications. Weed will lose its taboo, much of its stigma and inevitably take its place among more common commodities in our culture.

Perhaps one of the most important aspects of AUMA is its potential to create one of the most open markets in the largest state-based economy in the United States. Under the current legal framework, there are both a set number of marijuana licenses and strict distribution standards that growers must operate under. Under the Medical Marijuana Regulation and Safety Act (MMRSA), which passed California State Legislature 9/11/2016, the current distribution of marijuana is modeled off of a system Californians are already comfortable with: alcohol. AUMA, however, would create an unlimited number of licenses to be distributed to qualified applicants and remove the need to have a specific distribution middleman within the marketplace. As a result, growers could sell directly to dispensaries. Most importantly, however, AUMA allows for vertical integration of producers meaning the eventual cannabis conglomerate could control production, testing, transportation and sale, operating on the same scale as many of America’s most profitable and competitive corporations.

As a result of this expanded and vastly more business-friendly market, the growing market will specifically experience a number of changes. Until California became the first state to legalize medical marijuana in 1996, by passing Proposition 215, all growing of marijuana done in the state was done illegally. Medical marijuana, however, gave precedent for a limited number of farmers to transition from illegal to legal growth. However, because production was limited under Prop 215, farmers were in no danger of being squeezed out by larger corporate interests. As a result, marijuana was grown by the same people who grew it pre-1996. The iconic counterculture image associated with the seven-leafed plant was preserved in part because entrance into the industry had a high degree of self-selection. The rural, back-to-the-earth, Mendocino farmers who migrated northwards in the 1970s were the same ones growing cannabis seen in dispensaries.

Passage of AUMA, however, introduces the prospect of large scale production of marijuana on a level never seen before. The ArcView Group, a Bay Area Research Firm specializing in marijuana, predicts that simply by decriminalizing the plant on a statewide level and legalizing sale to persons over 21 would increase the marijuana market from its current $2.2 Billion to over $6.6 Billion. AUMA does contain a number of antitrust provisions; it prevents the establishment of any new farms over one-half an acre indoors or one acre outdoors for the first five years. Additionally, it prevents price fixing and other malicious business practices such as giving away products at a loss to hurt competitors.

This is good news for the consumer. Before Prop 215 was introduced, the price for one pound of cannabis hovered well over $6,000. To date, it is common to find prices as low as $2,000 or lower, which are expected to drop even lower post Prop 64. While mega-farms are prohibited, the sheer increase in supply will hurt the small time farmers. Those who have been pushing legalization the longest stand poised to be cut out by the very thing they created. With the passage of AUMA, this change will only become more apparent as an increasingly diverse market seeks to attract and satisfy an even wider consumer base than before.

The rapid expansion of the market as well as influx of capital that will inevitably come with it has some worried that it will leave many of those affected most closely by the War on Drugs who now seek to benefit from legal weed in the dust. People of color are overwhelmingly affected by marijuana related arrests. According to a study conducted by The Drug Policy Alliance, “70-80% of arrests for cannabis possession happening in communities of color, it is estimated that under 1% of the growing legalized market is owned and/or operated by individuals of color.” While the money generated from tax revenue may go about helping to heal those communities,  without a concerted effort the demographic makeup of those who directly benefit from legalization won’t change.

While medical marijuana has undergone considerable rebranding since its inception, the historical model for selling weed has stayed the same. One dispensary that has set out to change the consumer experience is Harvest, which recently opened in San Francisco. Lance Freeman, a consultant for Harvest explains the background behind this effort. “Stores reflect the fact that [dispensaries] stand on the margins of legality. Displaying no out-front signage, with doors manned by security guards and an undeniably pharmacy-like feel on the interior, visitors queueing up in large lines and zig zagging to a stark counter, it’s almost as if those who enter accept that they are there with a certain amount of presupposed guilt.” As part of the quest to “normalize” marijuana, products now range from cold brew coffee, and chocolate truffles, to kettle corn and beyond. (Photo Courtesy of Daniel Berman; Styling by Malina Lopez)

Legalization offers an opportunity for business to develop themselves towards new images. Stores like Harvest, have changed their displays and interior to more of a Starbucks/Whole Foods feel, shopping baskets and shelves of “baked goods” included. Mr. Freeman added, “This is an instant where the public has pushed legalization and now businesses are responding by pushing public perception of cannabis even farther. As it becomes more legal, businesses have the opportunity to add to the product and change it in number of ways.” Sellers and users alike hope that by changing the way weed itself as a product feels, some of the stigma that has both prevented efforts of legalization, and dissuaded customers, might be done away with as well.

Socially, perhaps the most significant portion of Prop 64 is that it rewrites current state laws eliminating all criminal penalties for minors found in possession of cannabis. Instead, those under 18 will be subject to community service as well as drug education. Additionally, those already convicted of offenses, which under Prop 64 would carry a lesser punishment, may apply for dismissals or recalls of their sentence. Americans, even those outside of California tend to agree with reforming the way America legislates drugs. Nearly 60% of Americans think individuals should not be prosecuted for possession of heroin or cocaine. Nationally, 63% support moving away from mandatory minimums and 54% legalizing marijuana outright. Because of California’s economic might as well as its cultural influence on the rest of the nation, legalizing and liberalizing policies here will likely have a spillover effect across the country. Once the public begins to view marijuana differently, how we come to understand and legislate harder drugs will likely follow suit. Passing Prop 64 puts California, and arguably the entire U.S. on a path not just legalize weed, but to normalize it. Businesses like Harvest, who understand this, aim to benefit in the coming years. When asked as to whether there was a chance 64 could fail, Mr. Freeman responded, “The door’s already open, it’s not a matter of closing it anymore, it’s just a matter of when people start walking through it.”