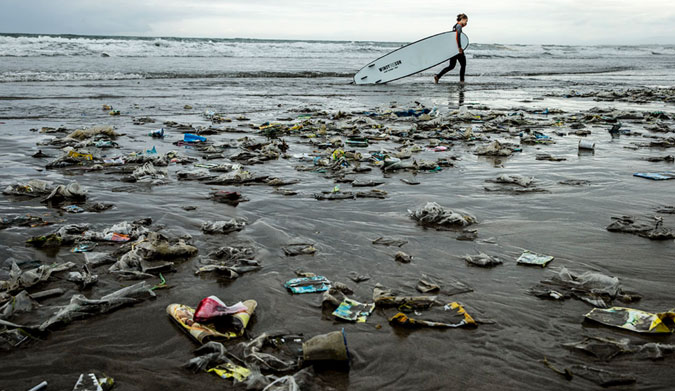 In California, a high-profile war for the future of plastic bags is underway; however, underneath the surface lies a much more sinister battle between private interests, with both sides having significant financial stakes in the situation.

Just over two years ago, California became the first state in the nation to pass legislation (SB 270) banning single-use plastic shopping bags statewide. Additionally, the law required stores to offer bags made from recycled paper or compostable materials for at least 10 cents. Grassroots efforts to prohibit single-use plastic bags first gained a major victory in 2007, when San Francisco became the first major U.S. city to ban them. Following that, 151 counties in California individually banned plastic shopping bags that account for about 40% of the state’s population, eventually leading to the statewide ban.

Before the law went into effect, however, opponents of the legislation announced that they had gathered enough signatures to delay the ban and hold a referendum on the issue in the form of Proposition 67; if Prop 67 passes, stores must sell paper bags but will be able to keep the bag surcharge profits for themselves. At the same time, another measure, Proposition 65, seeks to redistribute all money charged for carryout bags into a newly-formed Environmental Protection and Enhancement Fund that would help alleviate various environmental problems such as drought mitigation, clean water initiatives, and recycling.

If both measures pass, the proposition with the most yes votes decides where the money is allocated. It may be difficult to see the controversy at first. From an environmental standpoint, passing both Propositions 65 and 67 while passing 65 with more yes votes in order to put extra revenue towards solving environmental issues would be the most beneficial. However, Prop 65 considers any other measure that “bans free distribution, and mandates the sale” of carryout bags to be a conflicting measure, and would void other conflicting measures should it receive more votes. Depending on how courts interpret this, if Prop 65 has more yes votes, Prop 67 could be invalidated. As a result, a wide variety of environmental groups, businesses, unions, and elected officials have come out in support of Prop 67. This includes 21 newspapers, 29 current state legislators, Governor Jerry Brown, and numerous other local officials. One notable supporter of this proposition is CalPIRG, a nonprofit that worked on getting plastic bags banned in local counties for eight years before SB 270 was passed, and is currently working to garner support for Prop 67. Nicole Walter, a student at UC Berkeley and the State Board Chair of CalPIRG, stated that “single-use plastic bags are a really easy first step that we can get rid of… [this] can lead to further banning plastics and eventually fix the issue altogether.”

This may seem counterintuitive; why would a proposition that aims to give money to help solve environmental issues also purposely try to undermine a separate measure that seeks to limit plastic pollution? When taking a closer look into the origins of these propositions, it is clear that their placement on the ballot is the result of savvy political maneuvering and a tug-of-war between special interest groups.

The two propositions were proposed by the same group, the American Progressive Bag Alliance (APBA). The group was founded in 2005 and represents the plastic bag industry, actively fighting “against plastic bag bans and taxes nationwide.” Lee Califf, the executive director of the APBA, stated, “While we are confident California voters will reject the statewide bag ban scam at the ballot in 2016, we know that 84% of people believe that bag charges in general should go to a public purpose, instead of increasing profit margins for grocers.”

Others are more skeptical of the APBA’s true motives. Roger Kube of San Diego’s Surfrider Foundation, a nonprofit environmental organization, is suspicious, and voices his concerns: “Prop 65 really is a cynical ploy brought about by the plastics industry to either confuse voters, frustrate grocers or divide the grocers and the environmental community on this.”

Over $6.1 million dollars has been raised by the APBA so far, who have spent that money supporting Prop 65 and campaigning against Prop 67. The top eight donors, who have contributed over 99% of this money, are plastic and packaging companies, showing that the APBA is little more than the plastic industry’s way of trying to stay in business in California, portraying the influence of money in today’s political climate.

While the plastic industry may be using their money in order to protect their monetary investments, their opponents are not completely innocent either. Environmentalists may be leading the charge, but special interests work behind the scenes to help fund their campaigns. Three of the biggest parties financially supporting Prop 67 are Safeway, the California Grocers Association, and Ralphs, all of who stand to profit from the sale of paper bags if Prop 67 passes. Indeed, proponents of Prop 65 argue that the 10 cent fee is a “sweetheart bag tax deal” that will make the grocery stores “$300 million richer.” Others, however, see it as an important step in building a winning coalition. Walter appreciates the support of the grocery industry, saying, “I think it’s really awesome that grocery stores are on board and that they are the largest supporters of this. That wasn’t always the case; originally grocers were against a ban on grocery bags.”

Propositions 65 and 67 were both initiated by the plastic industry with the intent of keeping plastic bags in California. Fighting them are not only environmental groups, but large grocery corporations as well, that have spent a considerable amount of money in order to keep the profits from the sales of carryout bags. Although propositions are designed to allow citizens to voice their opinions directly, they have turned into a forum for special interests to influence policy in California. Prop 51 proposes to spend $9 billion dollars to improve the infrastructure in schools, but the effort has been funded by construction companies, which have spent over $11 million trying to sway voters. Prop 61 would set a limit on prescription drug costs and has been heavily opposed by the pharmaceutical industry; opponents of the proposition have spent over $108 million, easily making it the most expensive measure on the ballot. This is not to say that spending money on political campaigns automatically determines the cause as awful; money is critical in order to raise awareness and inform people about the issues. Unfortunately, it seems that unlimited spending has led to a political climate controlled by and fought for by the wealthy.  Regardless of your positions on the propositions, one thing is certain: money is the real winner in this election.