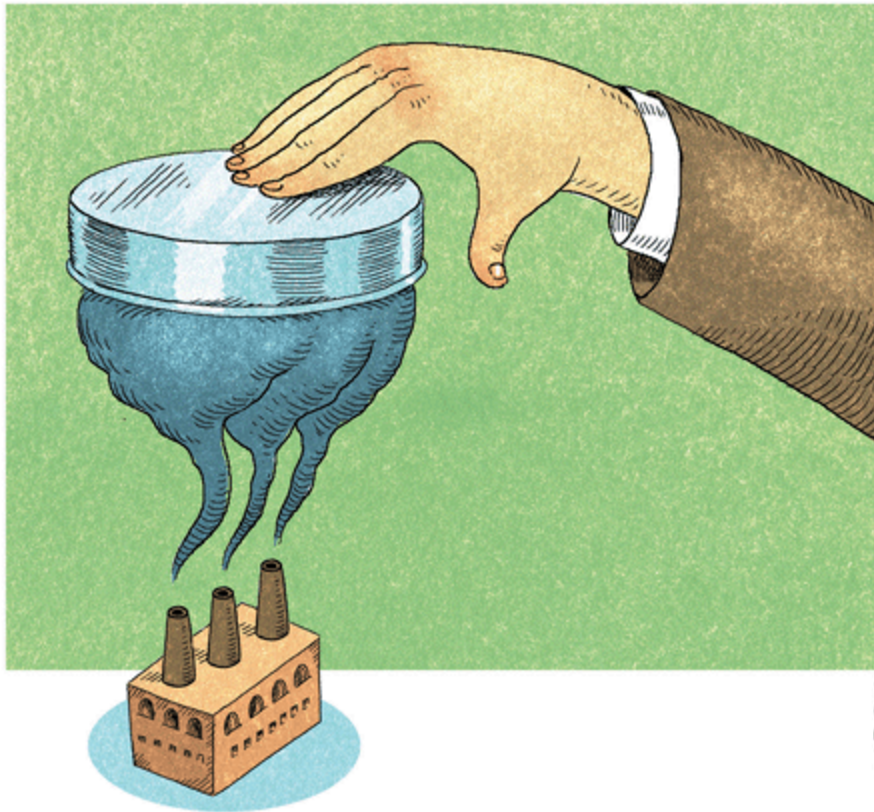 California’s signature environmental program is in jeopardy, creating a ripple effect that places the state’s entire climate plan at risk

Since the passage of the Global Warming Solutions Act of 2006 (AB 32), California has implemented a number of measures to reduce greenhouse gas emissions, the most ambitious being cap and trade. Heavily influenced by a similar system in the European Union, California’s cap-and-trade program works by putting a limit on greenhouse gas emissions, and then allocating allowances, or permits, that enable companies to discharge a certain amount of pollutants. Because only a certain number of permits are available on the market, companies can buy and sell permits depending on how many pollutants they emit, making it economically beneficial to cut down emissions. The number of total allowances also decreases every year, raising their value and decreasing the amount greenhouse gases.

Environmentally, cap and trade seems to be working well. Jeffrey Greenblatt, a scientist at the Department of Energy’s Lawrence Berkeley National Laboratory, conducted a study concluding that current environmental policies, including cap and trade, will allow California to meet its goal set in AB 32 of cutting GHG emissions to 1990 levels by 2020. Because of its success with its environmental policies, California has been a leader not only nationally, but also globally, welcoming representatives from more than three dozen countries in the last two years in an effort to share the state’s policies on fighting climate change.

Economically, cap and trade has become a crucial source of funding. The state keeps a certain amount of allowances and holds a quarterly auction that allow companies to obtain the remaining allowances they need in order to comply with emission standards and buy allowances for future years. This has been an enormous source of revenue for the state: nearly $5 billion have been raised since the program was implemented in 2013. 25% of that money goes to funding the high-speed rail project that will connect San Francisco to Anaheim, 35% is used for affordable housing projects, infrastructure repair, and clean transportation programs. The other 40% can be spent in various ways as long as they pertain to reducing emissions.

Recently, however, there has been cause for concern. A mere 11% of total allowances were sold in the May 2016 auction, and in the following August auction, only 35% of allowances were bought. The market had never had unsold allowances before this year, creating serious doubts about the program. During the May auction, $2.5 million was raised, a fraction of the expected $150 million. Due to the underwhelming amount of revenue in the last two auctions, lawmakers fear that vital programs that rely on the money could be in jeopardy, especially the high-speed rail project, which is expected to receive a total of $22.9 billion from cap and trade funds.

Why is the auction stumbling? The most popular theory is that the legal uncertainty of the program has dealt a huge blow to the integrity of the market. Cap and trade has been questioned on its authority to continue past 2020 and whether or not it should be classified as a tax. When cap and trade was first passed, it cited AB 32 as its reason to exist and cut down emissions. However, AB 32 stated that the goal was to cut down greenhouse gas emissions to 1990 levels by 2020, leaving the future for cap and trade beyond 2020 uncertain. Fortunately, this has been solved by the passage of SB 32 just a few weeks ago, which is an amendment that extended the emission cuts to 2030.

More worryingly, the California Chamber of Commerce has sued the California Air Resources Board (ARB), claiming that cap and trade is an unconstitutional tax. New taxes must be passed through the legislature with two-thirds vote; cap and trade did not receive that many votes when originally passed, and was thus illegal in the view of the Chamber. Cap and trade was originally upheld by the Sacramento Superior Court. Judge Timothy M. Frawley stated in his opinion that “certain revenue measures may be valid despite not having the attributes of the traditional fee classifications.” Frawley argues that even though cap and trade isn’t an orthodox regulatory procedure, it still is perfectly legal. However, the appellate court has been more questionable in its opinion. Although a final decision has not been made yet, the court has issued a series of questions relating to what the ruling will focus on, the most notable being: “If this court finds the auction is deemed to be an invalid tax, what is the remedy regarding the regulations, other than a declaration invalidating the auction component?” The question pertains to what would happen to cap and trade if it were unconstitutional, leading many to believe that the appellate court may rule against the ARB.

As with any other credit-based system, cap and trade requires the confidence of its buyers; if companies believe their allowances will be useless in the near future, there is little incentive to buy these permits. In addition, many analysts cite an excess amount of permits in the market due to companies buying a large number of allowances for future years, creating a serious supply-and-demand problem. There are some optimists, however. Frank Wolack, a Stanford economist who helped the state devise the program, stated that, “To the extent that not all the permits are being sold, that is a success of the program…. We’ve reduced greenhouse gases so much that businesses don’t need all the available allowances.” Proponents of cap and trade agree; although the lack of revenue may reflect poor commercial decisions on behalf of the state and unfavorable market conditions, the program shouldn’t be implicated as a failure just because it has been failing to raise money. Erica Morehouse, an attorney at the Environmental Defense Fund, says, “Cap-and-trade needs to be judged first and foremost on how it reduces emissions. Raising revenue is not a measure of its success.” That being said, there is no doubt that revenue received from the program is critical, and the success of the program relies on the money the auction generates; without it, the program will likely lose political support.

There are legitimate causes for concern, even if cap and trade is declared legal. The largest cap-and-trade program in the world, located in the EU, has crashed on multiple occasions. Moreover, a bill that would have established cap and trade nationwide was proposed but failed to pass through Congress in 2009, conveying how divisive the idea is nationally. Environmentalists are also torn over whether or not market-based measures are the right way to solve environmental issues. Larry Lohmann, a researcher at Corner House, an NGO that supports environmental and social justice, disagrees with the entire notion of cap and trade, writing, “Solving global warming means figuring out how to keep most remaining fossil fuels in the ground…. Carbon trading isn’t directed at that goal. Instead, it’s organized around keeping the wheels on the fossil fuel industry as long as possible.” Lohmann expresses a concern many environmentalists have: cap and trade is nothing more than an attempt to further ingrain the use of fossil fuels. However, putting a price on carbon directly combats climate change by limiting the total amount of GHG, and additionally, all the money made from the auction has to be spent on reducing emissions. Furthermore, as the years go by, it may be cheaper for industries to install cleaner technology, or even switch to forms of alternative, green energy, rather than to continue to pay for extra pollution permits.

To keep a steady revenue stream, regulators will have to cut the amount of allowances sold, especially those sold for future years, in order to stabilize the market and increase demand. The ARB is also allowed to hold unsold allowances for up to nine months, which could help immediately stimulate the market. In addition, cap and trade will eventually need to be reauthorized by the legislature with a two-thirds supermajority if the program is to avoid further legal troubles. In order to receive that much support, business-friendly Democrats and even a few Republicans will have to get on board. This could prove extremely difficult, as oil companies and other industries affected by cap and trade are lobbying hard against the program.

Cap and trade has brought immense financial benefits for the state and as the amount of yearly allowances is cut, it will drastically reduce the amount of GHGs released from the biggest polluters in the state. The money have been used to help make California a greener state for all, from funding rebates for low and zero emission cars, to helping install solar panels for low-income residents. Although cap and trade isn’t the perfect environmental solution, it is a flexible compromise that will help ease the transition away from fossil fuels. President Obama is also trying to execute cap and trade once again; his Clean Power Plan would allow states to use cap and trade as a method to reduce emissions. Despite the formidable challenges that lay ahead, the choice is clear: if legislators want to keep an invaluable source of revenue and continue to lead the fight against climate change, they can’t cap cap and trade.