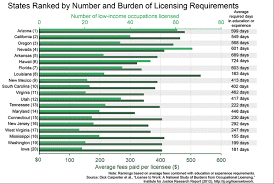 In California’s East Bay, a mother of five and a refugee of the Vietnam War who goes by the name of Thao runs a hair salon in her home. She worries that the increased stringency of occupational licensing could lead to more raid on illegal parlors in industries that require licenses. “If I lose my business, I might as well lose my house. I can’t see what is wrong, many of my customers have been happy with the hairdos and nail services that I do. We pay taxes and give [back] to our community, if they take it [the business] away, they won’t get that money. I just don’t understand.”

Occupational license laws have been some of the strictest in California. They are often used as justification to ensure the quality of work that is performed, but targets those who are particularly outside of the white-collar workforce. Though it is important to have some sort of quality assurance, the additional regulations that apply to more and more professions come at the cost of hindering social mobility and the opportunities of going into these particular professions, either as employees or as business owners.

Licensing promotes monopolies among industries and stifle competition from small business practitioners. Such restrictive laws that do not allow non-license holders to practice their trade will inevitably lead to higher service prices for these services, leading consumers with a choice of facing receiving such services in an illegal manner or by paying hefty prices. It is highly likely that consumers with less purchasing power will pick the first option, which helps to a current trend of finding or sentencing lower-income individuals based on not obeying petty laws like those that involve occupational licensing.

Indeed, there is strong bipartisan support towards curbing the additional regulations that are being proposed, as well as existing ones that have already been implemented by the state. This is due to the fact that such regulations are crippling opportunities, especially for those who are trying to move up the socioeconomic ladder, including veterans, ex-convicts, disabled people, immigrants, and those who lack or only have a high school education or a GED equivalent. Many of these laws actually expose the bureaucracy of the state government, where a significant amount of training as well as a qualifying examination have to be passed. These laws even apply to barbers and workers within the cosmetic industry, auctioneers, gardeners, and even travel agents and scrap-metal recyclers. Many of the mandatory licensing fees and its increases are discouraging to business-owners with little capital, in addition to preventing employees, especially for those at the minimum wage rate and even above, to start their own businesses while making it harder for employers to pay fairer wages because of the smaller difference in revenue. The 20 percent increase in professions that require a license nationwide over the last 60 years, along with only 35% of workers who need licenses actually are in possession of them in California, means that expanding the umbrella over more professions does not yield or verify the quality assurance of any services within these professions.

The large increase in occupational licensing laws are highly likely due to the laws which are backed by lobbyists of businesses that dislike competition. Many of these lobbyists work in the interests of successful and well-structured business owners as these owners fear or simply do not want to partake in a more competitive market with non-license (or continual license-renewing) holders. Established business owners are more focused in having as much of a monopoly as they can within occupational markets that are easily competitive, meaning that are willing to put as many obstacles as they can for other entrepreneurs and employees to compete with them. This in turn puts socioeconomically disadvantaged business hopefuls out of opportunities due to the sheer amount of costs and training that is needed to acquire licensings—time and money that could cost them their current job as well as time that many of these low-income people can not afford to lose. Many families depend on these small businesses that often do not have licenses. Many business professionals cannot give up their time due to fear of losing revenue, in addition to language and cultural barriers that may also prevent access to courses needed to obtain licenses.

The complexity of these lobbyists makes it hard to ensure other ways of quality assurance and authenticity as alternatives to the current occupational licensing laws. Many of these lobbyists often have representatives in state departments, and regulatory boards and agencies. However, there are other means to ensure such practitioners are doing a sufficient job in their work. Such alternatives include voluntary certifications that allow increased competition by people who originally are discouraged to pursue their own businesses. In spite of the concerns regarding safety and quality assurance, market competition will be the route to which will ensure the selections trends based on actual consumer behavior that will help determine competency, which uses these reviews and business trends as a measure over the binary stature of owning, or not owning licenses—which are largely put in measure by the influence of powerful lobbyists within the same market niches. to use such laws to ensure quality, the negative impacts of stifling small business in addition to increasing the amount of consumers who break the law in response means that the easing of such laws will lead to greater diversification, autonomy, and competition within California’s economy.

Kevin is a writer for the California Section of the BPR, studying civil and environmental engineering with an intended minor of public policy. In addition to loving (and hating) what goes on in politics these days, he also loves playing French horn, hiking, travelling, rowing, kayaking, and running and trying new things. He especially loves learning about different languages and cultures; he is quadrilingual and willing to practice foreign languages with almost anyone he meets!