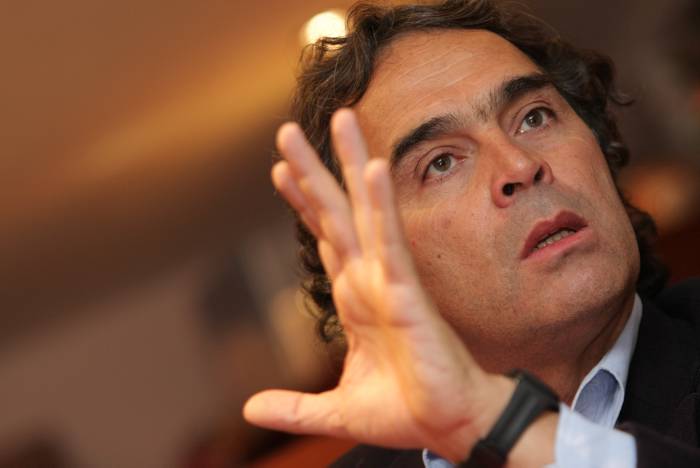 This past March, UC Berkeley’s Center for Latin American Studies Department held a series of guest lectures by Sergio Fajardo, current Governor of Colombia’s Antioquia department and former Mayor of Medellín. A mathematician who studied at the University of Wisconsin-Madison, Fajardo implemented transformative policies in Colombia’s 2nd most populous department and Medellín, its main urban center and former hub for the drug trade.

The Governor’s lectures focused on policies that reframed Medellín and Antioquia’s economic and social landscape through resolving three main problems he had coming into office: inequality, violence, and a culture of corruption.

The “spirit” of solving these problems, as Fajardo called it, was relevant to both his roles as Mayor and Governor. From expanding Medellín’s educational infrastructure to transforming Antioquia’s renowned coffee industry, Fajardo changed Colombia’s global reputation from a narco-state to a center for aesthetic urban development projects that have won numerous awards and attention. He also took advantage of the world’s obsession with Colombian coffee to strengthen the local industry for specialty coffee.

Berkeley Political Review had the opportunity to interview the former Governor concerning the challenges he approached coming into office and the unique methods he used to help shape the new face of Colombia.

Upon taking office as Mayor, Fajardo took the reins of a large metropolitan area mired in inequality, violence, and corruption. All three of these issues intertwined to form even greater challenges, with corruption fostering further inequality and attracting violence. When listening to Fajardo, it was evident that education was a strategy he used to kill three birds with one stone.

By improving educational infrastructure and increasing access to proper education for the more impoverished inhabitants of Medellín, Fajardo believed he could succeed in taking youths off the streets and into the classrooms. One of the more prominent problems he mentioned he faced in education policy was finance. Many students previously depended on microfinance within the Medellín community, and the then-Mayor implemented scholarships to assist Medellín’s youth in receiving funds to go to school.

To address corruption, Governor Fajardo referenced a policy he calls “many eyes, few hands.” This concept is meant to create transparency to make sure “not a single peso is lost.” His goal was to clarify how each and every peso in government circulates and how it is spent and distributed in the communities. “Many eyes” are different stages that look at all aspects of government action, aiming for greater responsibility in state spending to create a culture of legality and a way to use resources in the best possible manner.

Many of his policies were intended for the impoverished communities of Medellín and Antioquia to give the region’s lower-income residents an opportunity for upward mobility. In Medellín, he used a theory of development called the “most beautiful for the most poor.” These infrastructure projects, like improving public transit through the development of them “Metrocable” gondola lines, benefit the poorer communities in Medellín who depend on public transit to reduce travel times. The enhancement of Medellín’s eco-parks also aesthetically improved the city’s landscape by adding “green belts” with organic garden plots and playgrounds.

One of Fajardo’s most impressive programs was the expansion of Antioquia’s coffee industry. While Colombia has long been famed for its coffee, the Governor shed a new spotlight on Colombian produce through empowering the foundations of coffee production and allowing farmers to specialize cultivation at a local level. Coffee has been a crucial export for Antioquia for centuries, so the Governor took advantage of Colombia’s reputation by introducing new technology and developments to educate and interact with coffee growers.

Before, coffee growers contributed to a commune; now, cultivators have their own individual type of production. The improved quality and range of coffee types have created a “specialty coffee” scene in Antioquia. This was achieved by the department’s funding of massive education programs for farmers and residents to enhance the modes of coffee production.

The National University of Colombia supported the program through providing education and further research for farmers in the rural regions of Antioquia, financially benefitting local coffee growers and the national coffee industry as a whole. With specialty coffee, the higher quality of individualized coffee beans enables growers to charge higher prices for their prized product, with farmers reaping the rewards of increased profits.

One of the ways this program organizes instruction is through educational camps like the New Generation Coffee Camp, held outside of Medellín. The camp rallies young coffee growers outside of Antioquia’s largest city and teaches them a range of skills, from processing methods and fermentation to barista skills and social media promotion. The camp is funded through a 3-year program led by Governor Fajardo’s agenda to transform the image of Antioquia and Medellín.

The Antioquian government has recently started hosting Antioquia’s Best Cup, an event to showcase the region’s array of specialized coffee. Local growers of Antioquia present their varieties of coffee to interested buyers from around the world, putting these coffee growers on a global stage. The specialization of Colombian coffee growing has also benefitted coffee-related occupations like baristas and coffee tasters. Urban centers have benefitted from the growing popularity of trendy cafés, adding to the aesthetic and social transformation of Medellín.

When asked about his influence, Governor Fajardo noted examples from policies previously implemented in other Latin American cities, like the Colombian capital Bogotá and Rio de Janeiro in Brazil. He emphasized that these are very different circumstances, even when comparing Bogotá and Medellin, Colombia’s two largest cities. Although his policies have received much attention, Fajardo believes there is more work to be done. Inequality, poverty, and corruption remain high in the cities and towns of the region he governs. He created programs to fix these issues, but as Governor, he only wields influence within the borders of Antioquia.

Antioquia is not alone—Colombia sees these issues on a national scale. Fajardo’s programs have influenced policymaking in other parts of the country, particularly with the new approach to the coffee industry. Globally, Medellín has been recognized for its aesthetic projects through city design awards. Previously infamous for violence and organized crime, it is now ranked as one of Latin America’s best cities to live in.

Although problems still persist, Medellín and Antioquia have seen major improvements from Sergio Fajardo’s policies. Don’t let shows like Netflix’s Narcos maintain the image that Medellín is a city run by narcotics traffickers. Medellín is a dramatically different city from what it was during Pablo Escobar’s reign of terror in the 1990s, socially, economically, and politically—and it’s Sergio Fajardo’s hard work that contributed to such a transformation.

Published in Interviews and World