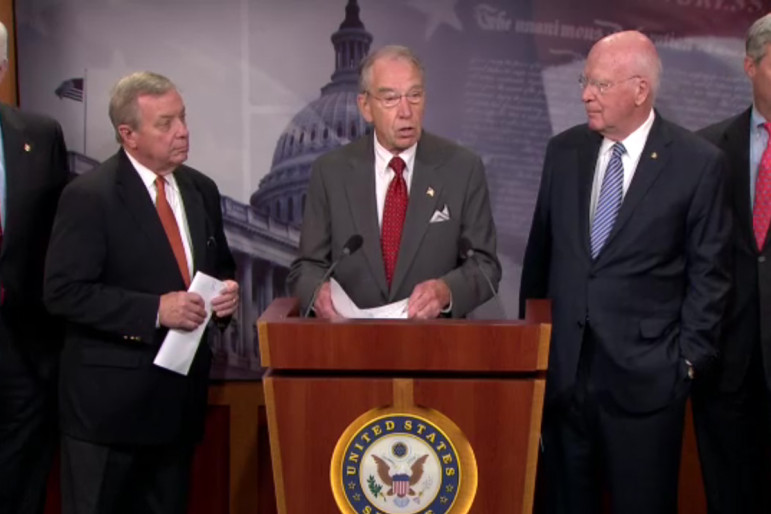 In the past few years, there has been a repudiation of the tough-on-crime era of the 1990s by both sides of the aisle. There is a belief that too many low-level offenders, particularly drug offenders, have been locked up for too long, and the government is literally paying the price for it. In 2010, the Fair Sentencing Act, which reduced the disparity in sentencing between crack cocaine and powder cocaine, passed with the support of both Republicans and Democrats. In this current session of Congress, the focus has been on the Sentencing Reform and Corrections Act, S. 2123, which would reduce federal mandatory minimum sentences for a variety of crimes. Mandatory minimums are minimum sentences that are given automatically to defendants convicted of a certain crime. S. 2123 is a rare area of bipartisan consensus during an election year.

Among the many provisions in the sentencing reform section of the act is a reduction in mandatory minimums for those previously convicted of a drug felony. To automatically trigger these new mandatory minimums, the defendant must have committed a serious or violent felony, which prevents this provision from applying to low-level offenders. The bill also increases the current safety valve provision, which allows the judge to determine an offender’s sentence if certain conditions are met rather than an automatically imposing a mandatory minimum. The new conditions allow those who have up to four criminal history points (which are determined based on the type of crimes one committed) to be eligible for the safety valve, while excluding violent criminals. The bill also targets those who had a high-level role in the drug operation, such as a manager, exporter, and manufacturer for existing mandatory minimums, rather than low-level roles, such as street dealers or couriers. It also retroactively applies the Fair Sentencing Act.

S. 2123 has a good (though not guaranteed) chance of passing through both houses because both Republican and Democratic leaders have spoken out in support of it. All criminal justice bills must pass through the Judiciary Committee, and the Committee’s chairman Senator Chuck Grassley (R-IA) dropped his opposition to the bill last summer. This helped the bill advance out of the Committee with a bipartisan 15-5 vote. Senate Minority Whip Dick Durbin (D-IL) and Senator Patrick Leahy (D-IL), the highest-ranking Democratic member of the Judiciary Committee, spoke out in strong support of the bill as well. Speaker of the House Paul Ryan (R-WI) said that the bill will come up for a vote on the House floor this year after it passed through the House Judiciary Committee, while Majority Leader Mitch McConnell (R-KY) is hesitant to bring up a bill for a floor vote if it will divide the Republican caucus.

There are detractors who believe the bill goes too far, validating McConnell’s concern about a divided caucus. Senator Ted Cruz (R-TX), who supported sentencing reform in the past, and Senator Tom Cotton (R-AR) are among those who have raised significant opposition to the bill, claiming that the bill will mostly lead to the release of violent criminals. Senator Cotton has introduced his own legislation, S. 2514, which is now in the Judiciary Committee, that would mandate the federal government to release data every six months on the recidivism rates of those released due to a retroactive sentence reduction. In response to Senator Cotton’s concerns, there are likely to be amendments made to the Sentencing Reform and Corrections Act that would take out sections aimed to reduce sentences for those who had a weapon during the commission of their crime and those of armed career criminals.

A less talked about section of the Sentencing Reform and Corrections Act aims to reduce recidivism rates and has not received as much attention, even as Senator Cotton rails against the issue. On the House side, this is in a separate bill, H.R. 759, but this bill has also passed out of the Judiciary Committee with bipartisan support. These recidivism provisions would mandate recidivism reduction programming in prisons within the next six years, such as jobs, training, and recovery programming. To incentivize participation in these programs, prisoners would be granted time credits that could be served in pre-release custody. Addressing Senator Cotton’s concerns indirectly, the bill also directs the Attorney General to develop a risk and needs assessment that would determine the recidivism risk of every prisoner.

However, though this bill is big step on the federal level, federal prisoners do not make up a large part of the prison population. That is why there has to be reform on the state level. In particular, there has also been a move toward reform in California. Governor Jerry Brown is attempting to get a criminal justice reform initiative on the 2016 ballot. The initiative would allow inmates opportunities to earn credits toward early release, such as by taking part in educational or rehabilitative programs, and would allow for the possible early release of non-violent offenders who have completed their sentence for their main offense. The initiative would also give judges discretion to decide if felons 14 and younger should be tried as adults. While not reforming sentencing laws directly, the initiative is in line with the federal attempts at reducing recidivism and the prison population. Brown himself signed tough mandatory minimums into law when he was Governor in the 1970s and is emblematic of the shift in attitudes toward criminal justice. Brown recently won an appeal that allowed the signature gathering process to move forward for his ballot initiative, while the California Supreme Court decides whether any election laws were violated during the introduction of the initiative.

Like many issues this year, criminal justice reform must wade through election year politics, but it seems that it has a chance to succeed, since it has leadership support in the House and strong Republican support in the Senate. States like California have also moved toward reform, showing that this year could be the start of criminal justice reform throughout the nation.