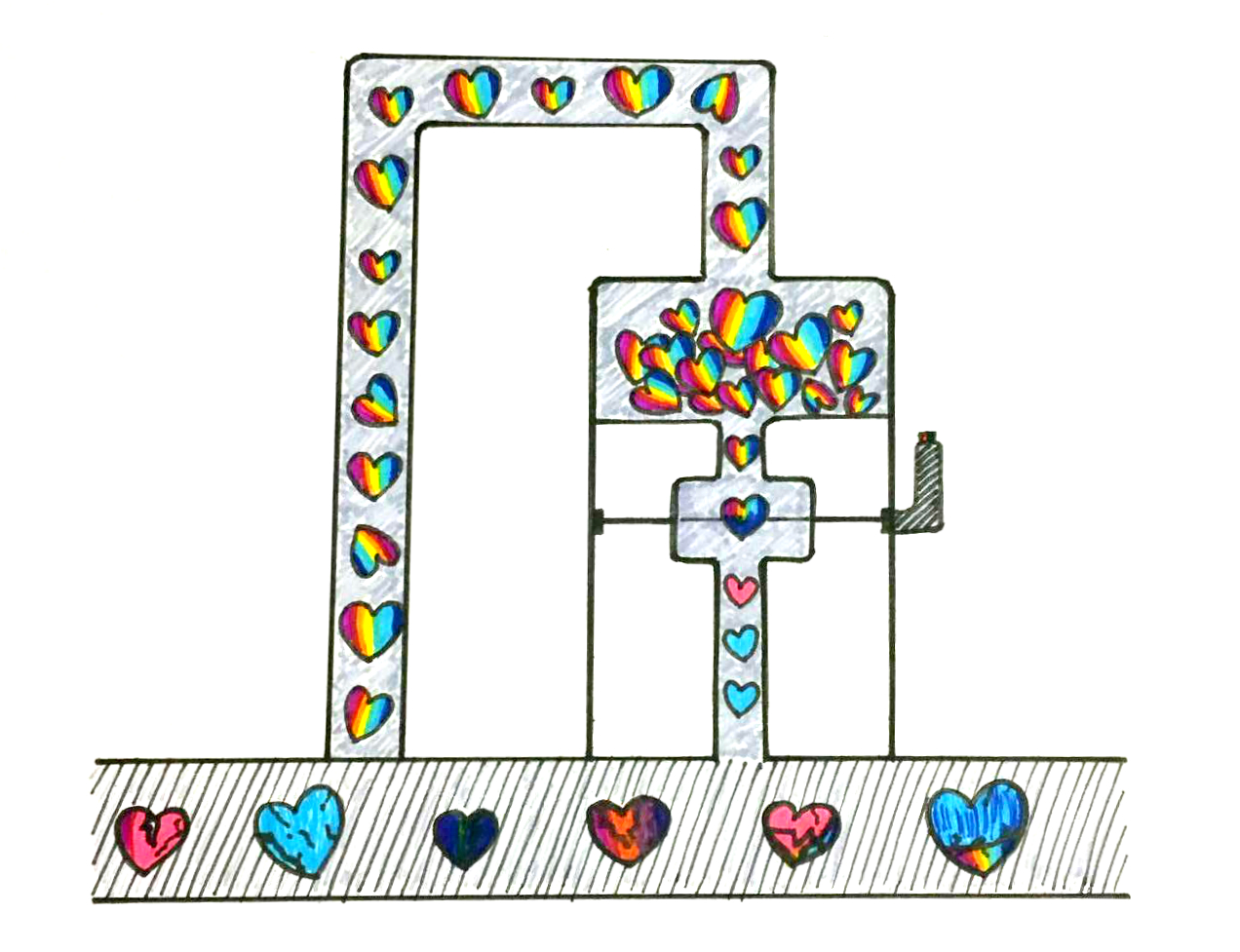 The facts are in about gay conversion therapy, it is now time for action

“Similar to Pavlov’s experience with dogs, I was supposed to associate the touch of a man with pain. By the end, even hugging my father brought on flashbacks.” This is one small part of the story of Sam Brinton, who was forced as a child into conversion therapy, onto a journey of confusion, pain, suicide, all starting with a crush on his male best friend in the seventh grade.

Currently, only four states: California, Oregon, New Jersey and Illinois, as well as the District of Columbia have laws that ban the gay conversion therapy which Sam and many other youths had and have to go through to “fix” their sexual orientation. More than 18 states have introduced and are considering similar bills. In April 2015, Valerie Jarrett, top official in the Obama administration, responded to a We the People petition denouncing conversion therapy practices. In February 2016, four members of Congress, Senators Murray of Washington and Book of New Jersey, California representatives Speier and Lieu sent a letter to Federal Trade Commission (FTC) chairwoman Edith Ramirez urging the FTC to exercise their authority under the Federal Trade Commission Act to prevent businesses from counseling individuals with intent of conversion. In the same month, several LGBT groups filed a complaint with the FTC against a Virginia-based group, People Can Change. Also in February, New York’s Governor Cuomo introduced measures relying on economic incentives to discourage the practice, such as banning insurers for covering costs associated for therapy for minors.

On September 19 2012, California Governor Jerry Brown signed into law SB 1172, the nation’s first legislation banning “conversion therapy,” which prohibits licensed mental health professionals from offering therapy aimed at changing the sexual orientation of gay and lesbian clients under the age of 18. The law states that therapists and counselors who use efforts to eliminate or reduce minors’ same-sex attractions would be deemed engaging in unprofessional conduct and subject to discipline by state licensing boards. The statute did not apply to unlicensed pastors or lay counselors.

Both the governor and California Attorney General Kamala Harris actively spoke about the necessity to ban these so-called “reparative therapy” to protect minors. Harris asserted that the law was “based on scientific and professional consensus reached decades ago that homosexuality is a normal expression of human sexuality and not a disease, condition, or disorder in need of a ‘cure’”.

Even before the American Psychiatric Association listed homosexuality as a personality disorder in 1952, conservative and religious groups and individuals have argued that sexuality is not innate and can be altered, and have taken part in the horrific history of curing homosexual men and women. The techniques used are ridiculous and strange at best, cruel and terrifying at worst. Bicycling is believed to help restore health and heterosexuality, as homosexuality was rooted in “nervous exhaustion.” Exorcism is practiced to cast out the “homosexual spirit,” exemplified by a church’s gay exorcism video where people shouted “Come on, you homosexual demon! You homosexual spirit, we call you out right now! Loose your grip, Lucifer!” as a young boy laid writhing on a church floor. Electroconvulsive therapy involves needles stuck in fingers of its recipient, who would be shocked upon showing pictures of homosexuals engaging sexual acts. One technique forces minors to masturbate to images of the opposite sex. These are merely a few of the many other approaches: fetal intervention, “overdose on homosexuality”, cold showers, teaching heterosexual dating skills, hypnosis, sex organ transplants, cocaine, and genital mutilation.

Exploiting shame where no shame should be felt, invoking anxiety where no anxiety should be endured, these therapies can create damages taxing on mental and physical well-being, and even lead to fatalities. The APA’s 2009 report listed the risks associated with the practices, including suicidality, substance abuse, self-blame, hostility, sexual dysfunction and many more. These risks are even greater for the developing youth. The lack of familial validation and love in the lives of lesbian, gay and bisexual young adults during their adolescence resulted in an increased likelihood of attempted suicide by eight times, of deep depression by three times, of illegal drug use by three times, compared with peers who experienced no or low levels of rejection by their families.

Currently, the National Association for Research & Therapy of Homosexuality (NARTH), a group of therapists who endorse and practice conversion therapy, offers practice guidelines to its members. Scientific and medical groups have pointed out the lack of evidence substantiating the claim that sexual orientation is malleable and have offered proof that such conversion therapies are damaging. Every major mental health professional association: the American Psychological Association, the American Psychiatric Association, the American Medical Association, the American Academy of Pediatrics, and the Pan American Health Organization unanimously question or reject the efficacy of this therapy. The American Psychiatric Association argued that such therapy could lead to “depression, anxiety and self-destructive behavior,” while the Pan American Health Organization, a regional office of the World Health Organization, have states that this therapy poses “a serious threat to the health and well-being” of those affected. Both the American Psychological and Psychiatric Associations have published conclusive studies and statements that substantiate the claim that there is not any therapy that can change a person’s sexual orientation or gender identity. A federal report released in October 2015 by the Abuse and Mental Health Services Administration called for an end to the practices.

Given the contentious nature of the issue, the success of the California legislation drew controversy and outcry by those who believed in the therapy. Former Arkansas governor Mike Huckabee weighed in and slammed the Californian law as a “dangerous” political statement on the April 18th installment of his radio show, speaking to its harmful effects on people who “decide” to be heterosexual. Speaking with Liberty Counsel head Mat Staver, he asks rhetorically, “Let’s say a young person comes in and says, ‘You know, I’ve always believed I’m homosexual, believed that since I was 7 years old, but now that I’m 17, I’ve decided that I’m not, I’m heterosexual [and goes to a pro-homosexual counselor.] Would that person be at risk?” Staver echoed Huckabee’s sentiments, pointing out how the law prevents the moving of a client “towards heterosexuality” and expressing his concerns that it would direct clients to untrained or unlicensed therapists.

The ban, originally scheduled to take effect on January 2013, was delayed by the 9th Circuit pending its decisions on challenges to the law brought by families and therapists.  Among them are a national association of Christian mental health counselors, Florida-based Liberty Counsel, California-based Pacific Justice Institute, as well as two families who say that their teenage sons benefited from the therapy. They argue that the ban infringes upon free speech, freedom of association and religious rights, suppressing all other viewpoints while only permitting the message that same-sex behavior must be accepted, thus silencing the counselors who, in their professional judgment, determine that the same-sex attractions conflict with religious and moral beliefs of their clients. For counselors who practice sexual orientation change therapy, so-called “reparative therapy”, they claim that the law threatens their livelihoods.

On August 29, 2013, the law was upheld in a unanimous decision by three judges of the U.S. Court of Appeals for the 9th district on the appeal of Pickup v. Brown. The panel ruled that the law did not violate the free speech rights of either the counselors or the people seeking treatment. It ruled that it was in the state’s interest to eliminate professional treatments with harmful effects on its citizens. In the court’s opinion, Judge Graber wrote “The First Amendment does not prevent a state from regulating treatment even when that treatment is performed through speech alone.”

The court’s ruling was indubitably a setback for proponents of gay conversion therapy. Supporter and opponents alike agreed that the decision could embolden efforts in other states’ to ban this of therapy. In regards to the court ruling, Wayne Besen, executive director of Truth Wins Out, which combats misinformation about gays and lesbians, said that “This is a massive victory, and it sets the stage to pass similar laws in states across the country.” Indeed, even before the judgment was published, the victory in California saw itself echoed in other parts of the country.

In June 2013, the leading beacon of the ex-gay movement for 37 years, Exodus International announced that it would disband amid growing skepticism surfaced internally of the proclaimed alterable nature of sexual attractions. In the past year, the group’s own president, Alan Chambers, had vocalized his belief that therapy could not change sexual orientation and had released a statement apologizing to gay men and lesbians for the pain his organization had caused,“I am sorry we promoted sexual orientation change efforts and reparative theories about sexual orientation that stigmatized patients.” On August 19, 2013, Republican governor of New Jersey Chris Christie made his state the second to ban gay conversion therapy practices. Oregon and Illinois followed on May 19 and August 20, 2015 respectively. Bans have been introduced in other states in late 2015 and early 2016 and are pending or under review by committees or subcommittees.

It is wonderful that there are proposed bills and tangible efforts aimed to protect minors, who are almost always coerced to undergo the horrific techniques prescribed by conversion therapy, and to prevent licensed therapists from preying upon parents and guardians who are well-intentioned, but uninformed about the grave risks to which they subject their children. However, the lethargic legislative process means that many minors continue to be tormented, physically, psychologically, and mentally for being who they are. It is urgent and imperative that the LGBTQ community is protected from these kinds of therapies. One method is to raise national conversation about this is with a proposals for federal and state legislation and ballot initiatives to ban any form of conversion therapy, no matter who administers it and who is subject to it, in order to send a clear message that this kind of practice will not be condoned. Though a challenge, the solid scientific backing and a proper approach can help ensure that no one will ever be put through such traumatic experiences that can create lasting damage.

California Representative Ted Lieu, author of the bill which eventually became the legislative precedence set by California, introduced HR 2450 – Therapeutic Fraud Prevention Act to the House of Representatives on May 19th 2015, a bill which prohibits conversion therapy from being provided in exchange for monetary compensation. It was referred to the Subcommittee on Commerce, Manufacturing and Trade on May 22nd 2015. The subcommittee and representatives of the House should seriously consider this bill and work toward passing legislation that protects their constituents from the harm posed by conversation therapy.

Concluding his story, Sam says,“ I am living proof that what conversion therapy can destroy, self-acceptance can save. Today, I know who I am. I’m strong in my faith, and I’m strong in my identity. And I know that I can’t change what I never chose.” Not all stories have a happy ending like this, but may the survivors’ tales warn us of the dangers conversion therapy can inflict if it is not eradicated and propel us to take action.

Learn about Sam’s and other survivors’ stories:

Tiffany Lo is the deputy editor of the California section of the Berkeley Political Review. She is currently studying Rhetoric and Political Science, and hopes to pursue a career in law. In her spare time, Tiffany loves to read, sing, paint, design flyers, take photos, try new foods and explore new places!