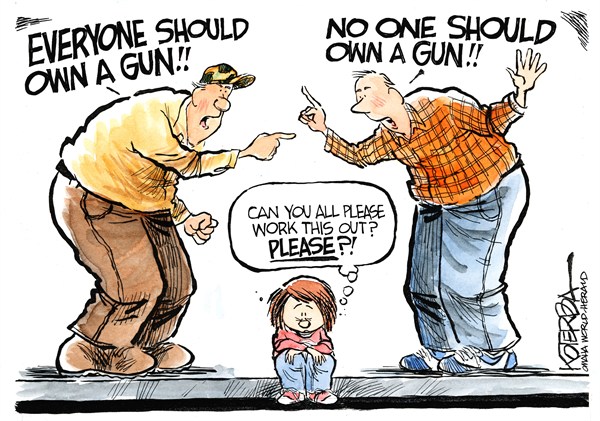 Cracking Down On Gun Control In California

On January 1st, 2016, a new gun control statute regarding the seizure of firearms to allow for “law enforcement, or immediate family members to ask a judge for a restraining order if they feel that someone is a danger to themselves or others… and bar the person from purchasing firearms by placing them on the state’s do-not-buy list” went into effect. With this legislation, California can be considered a pioneer in gun control policy making, but there are still steps to be taken. Because of current inadequacies, California must continue to create legislation if it wishes to continue to lead the nation in the creation of gun-control measures.

In recent years, there has been some friction within the California policy framework— several seemingly normal people get flagged and are stripped their right to possess guns for trivial infractions; several mentally unstable people are allowed access to firearms despite exhibiting several signs of potentially being dangerous. This often happens due to algorithmic oversights in the creation of the state’s do-not-buy list. Currently, California creates its no-gun list by “cross-referencing files on… 1 million handgun and assault-weapon owners with databases of new criminal records and involuntary mental-health commitments” With a population of 38.8 million, it is expected that several mistakes will be made.

Thus there is a possible exploitation of Californian legislation: although we spend a lot of money to maintain our information systems and our infrastructure, we do not spend enough to do a systematic case-by-case study on people before they are placed on the list. When considering the efficiency of the state’s no-gun list, there is a lack of sufficient measures that can address mistakes. Appeal processes are lengthy and cannot fully satisfy the number of cases that need to be reviewed. The legislation that was passed into effect on the first of January serves as a possible avenue to further facilitate the illegitimate placement of people on the no-gun list. The new statute has outlined several specific mechanisms that aim to prevent future tragedies, such as the San Bernardino shooting. In order to use this law, a petitioner must first appeal to a judge regarding the unstable person(s) in question. The petitioner must explain why s/he feels a restraining order is necessary and is in the better interest of the public. If the order is granted, a judge can then lawfully force the person in question to forfeit all firearms within 24 hours of the decision. This ban will remain in place for one year, after which the judge must decide whether or not to terminate the sentence. Although it allows for people to protect themselves from potentially dangerous people, it does not provide much protection against spiteful reports or unfair, biased judge decisions.

Gun control is a serious issue that does need to be addressed, but the current reactionary policy making provides ample reason to lobbying organizations, such as the NRA, to claim that introducing new legislation yields no additional solvency. Although countless number of mass shootings is often used as evidence that Californian advocacy for gun control is not working, these arguments also fail to consider that the status quo does not seem to provide any relief as well. There are some virtues of a precautionary and proactive restrictions on the sale of firearms over the confiscation after they have been distributed. Logically, such an approach makes sense. It seems more efficient to stop, or at least alleviate a problem before it spreads instead of waiting for a problem to spread and then attempt to rectify the situation. This would also prevent California from having to fund an infeasible case-by-case determination of a do-not-buy list, and would minimize the number of people unintentionally affected. This in turn would also garner more support from the public—if people do not think they will be accidentally affected, they will have more incentive to support new gun control measures.

On the national level, President Obama has recently passed executive action on January 5th regarding the issue, and his solution addresses almost all of the problems outlined in this article. His plan is outlined as follows:

However, an executive action is not a solid form of legislature. It can easily be overridden by any future president; many Republican candidates have already vowed to revoke Obama’s action upon winning the presidency. If Congress means to change the status quo through these new measures, it is important to solidify the law through the traditional Congress voting system. California seems to be poised to lead the nation to a more bipartisan acceptance of gun control measures, especially with its latest statute. If it continues to innovate with new laws, such as a requirement to more proactively track gun shipments, or to severely monitor gun shows, or to produce a metric by which it can more easily detect the illegal second-hand sale of firearms, it might see a lower mass shooting rate, and has the possibility to serve as a prime example for the rest of the nation to follow.