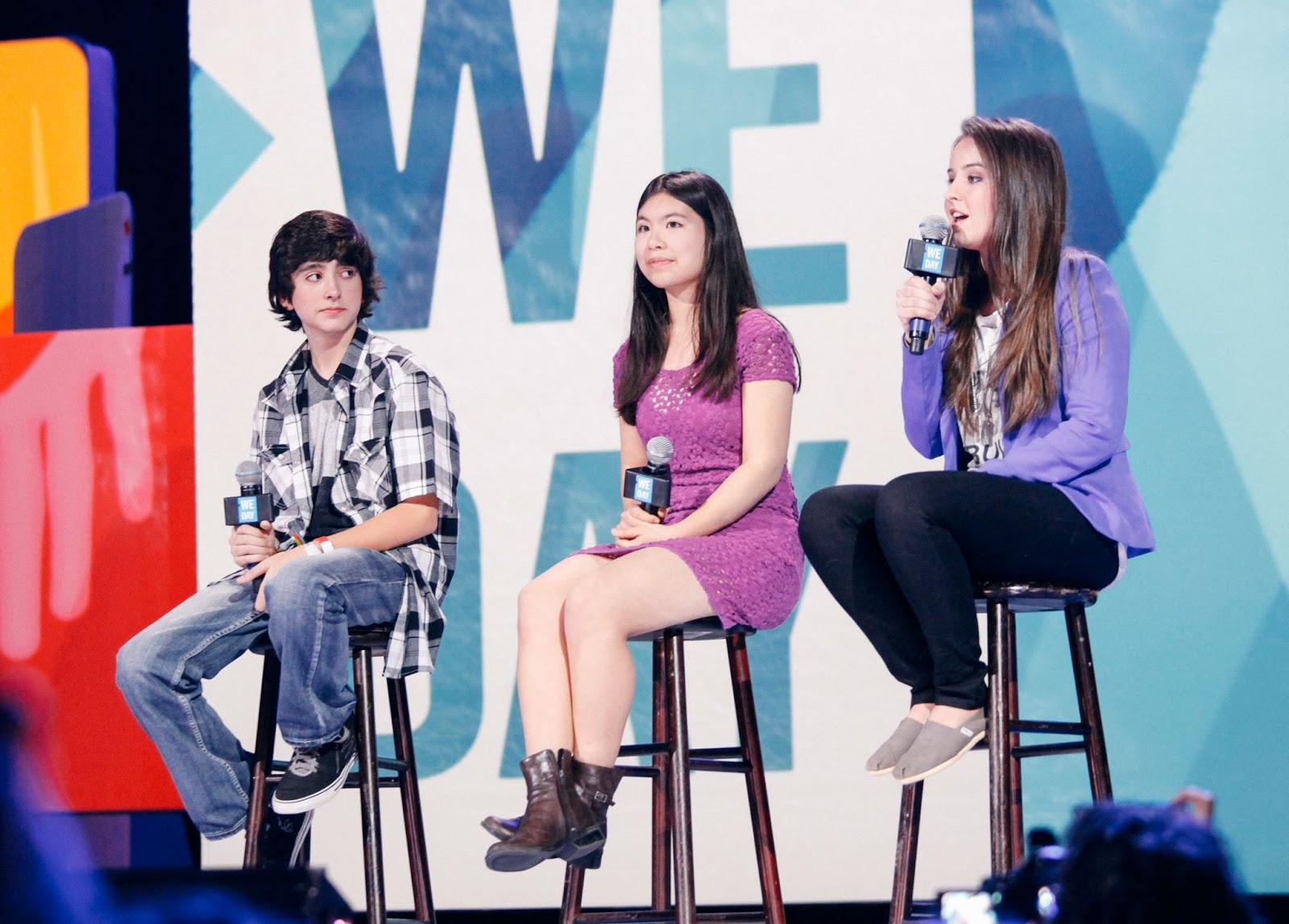 March 2014: I’m at Seattle’s We Day, the flashy event celebrating youth public service that happens in stadiums in various big cities every spring. In one of the more surreal experiences of my life, I take pictures with Seahawks coach Pete Carroll and Martin Luther King III in a backstage dressing room, slightly insulated from the chaotic throngs outside. The event fills Key Arena with cheering teenagers and flashing lights. It feels like a cross between a sports game, a Taylor Swift concert, and a megachurch sermon. Everything is choreographed.

I’m on a panel with two other teenagers and our moderator, musician Joe Jonas. The lights are so blindingly focused on us that it’s impossible to make out a single face in the dark shapeless audience. I feel a strange pressure to say things that garner applause–which means staying light, upbeat, simple, saying happy things in the guise of “empowerment” that don’t critique, observe, upset.

The questions are easy. They have to do with personal achievements, what had “lit my spark,” how I’d found “success.” I stay painfully conscious of the fact that the questions are meant to be answered in “approx. 15-30 seconds.” A lot can be done in 15-30 seconds; thoughtful and thorough analysis of a real issue is not one of them. A statement like “Follow your passion,” though, is.

When I was curator of TEDxRedmond (now TEDxYouth@Redmond), I remember we had an informal rule (more like recommendation) for our speakers: don’t say the words “Follow your passion.” We gave this recommendation because we expected our conference’s audience of peers to be as jaded as we were about hearing that phrase, made trite by overuse in every assembly with a motivational speaker, every over-cheerful poster or card.

“Follow your passion,” “Have an impact,” “You can do anything,” and all these other choice phrases of fluffy optimism are delightfully non-committal, by way of being non-specific. There is no cost-benefit analysis of the consequences of following certain passions versus others. There is no scale, or even quality, specified for the impact. There is no reality check on the “anything.” Yet somehow, We Day manages to turn these clichés that the TEDxRedmond team had thought of as repulsive to youth and make them palatable. In fact–more than palatable, they make this ethos of well-intentioned platitudes desirable.

Desirable enough to make a lot of money. The Kielburger brothers, who founded Free the Children, also founded the for-profit social enterprise Me to We, which sells a variety of apparel and accessories on its online store–and at We Day events. At Key Arena, volunteers (looking discomfortingly reminiscent of hot dog vendors at a baseball game) go roving through the aisles carrying baskets of merchandise with straps on their necks. They make quick work of selling colorful thread bracelets and other trinkets bearing We Day branding. When I go outside there are T-shirts for sale, too, at booths that look like concert merch stands. I see people taking selfies together in shirts that say things like “Change the World” and “Be the Change.”

I wonder if a more apt slogan for this milieu might be “Buy the Change.”

After all, this ethos of good intentions and oversimplification ultimately presents the tantalizing possibility that you, too, can be a participant in the grand dream of social good. It used to be that only the very rich could be philanthropists. To grow up in America is to be surrounded by ghosts of magnates of industry–we walk on streets and go to schools and visit art museums that all bear their names. But now we live with a different beast: consumer humanitarianism. Few of us are Carnegies, but all of us are consumers. The prospect of “doing good” just by buying things democratizes our aspirations, so that even the middle-class students of Seattle-area public schools can dream of changing the world as they pay $30 for a T-shirt.

It is the seductive whisper of consumer humanitarianism that allows us to fall for its gleaming promise, that we can simply buy the world we want to see.

The Me to We online store even says as much: “Wear your passion for changing the world” on the front page, “Give a better world” on another.

But are they wrong?

People love TOMS Shoes. It seems like every other person pitching on Shark Tank has a social good spin on their company. I’m glad to see that social enterprises are raising awareness of important issues and generally bringing deprivation and poverty in the world to a more prominent place in public consciousness.

Here’s the problem: the well-intentioned platitudes of events like We Day and the ethos of consumer humanitarianism that many social enterprises perpetuate oversimplify and make it seem like poverty eradication or education access or a thousand other issues are really easy to solve.

In the poignant “The Problem With Little White Girls (And Boys): Why I Stopped Being a Voluntourist,” Pippa Biddle wrote this of her service trip abroad: “Our mission while at the orphanage was to build a library. Turns out that we, a group of highly educated private boarding school students were so bad at the most basic construction work that each night the men had to take down the structurally unsound bricks we had laid and rebuild the structure so that, when we woke up in the morning, we would be unaware of our failure.”

Shoddy construction work is the least of the potential problems that can arise when people without requisite qualifications decide they can go into a situation and “fix” things. What about putting together boatloads of clothing–boxes and boxes of the rejects and cast-offs of the Global North–and sending them to the kinds of places where Discovery Channel documentaries show everybody wearing rags? Surely giving people inexpensive clothes to wear could have no bad impacts, right? In actuality, this can decimate the clothing industry indigenous to that region (who would buy clothes from local manufacturers if they could get the equivalent quality for cheaper), putting many people out of jobs and having ripple effects that kill local economies (CNN Money).

Moreover, there are often long-term effects of NGOs having widening presence and power in developing countries that will never get discussed in a We Day event–the potential for NGOs conducting services thought of as being under government purview (e.g., water, electricity, healthcare, sanitation, etc.) to “crowd out” government, decreasing its accountability to citizens and de-incentivizing it from providing needed services (ultimately weakening the country’s political institutions).

These are not reasons to stop giving to your favorite charity or grow suddenly cynical that no efforts anywhere will make the world a better place.

But uneducated actors can have unintentionally negative impacts, and blaring feel-good messages about social good that simply try to increase the number of uneducated actors without educating are doing the world a disservice. I wish for a We Day that invited people like my amazing professors at Berkeley to come speak, not just a lineup of sports coaches and rockstars and people like me, told to answer questions about education in 15-30 second soundbites.

The second reason I question the efficacy of consumer humanitarianism is this: ultimately, there’s something repulsive about the idea that consumerism can make a better world. India’s first prime minister, Jawaharlal Nehru, once said, “there was no lack of violence and suppression in the capitalist world, and I realized more and more how the very basis and foundation of our acquisitive society and property was violence.” The senseless purchasing of shit we don’t need–regardless of whether it has a great slogan printed on it–is rooted in a violent social and economic structure that it does absolutely nothing to challenge.

Our frenetic cycle of making and buying and throwing away, regardless of what saintly goals for social good we tack onto it, unquestionably bleeds our planet dry. It also makes us poorer inside: the consumerist bent of social good means binding our dreams to the pedestrian confines of material goods. Put simply, it makes it so we think in terms of things: “let me buy more things here, so that they can have more things over there”–instead of in terms of institutions or relationships or ideals. It’s a good thing that so many people, all the bright-eyed students who I saw at We Day, want to change the world for the better. I’m just hazarding a guess that true change is usually woven with threads more transcendent and ethereal than the ones in $30 “Change the World” shirts.

Featured image courtesy of the author.