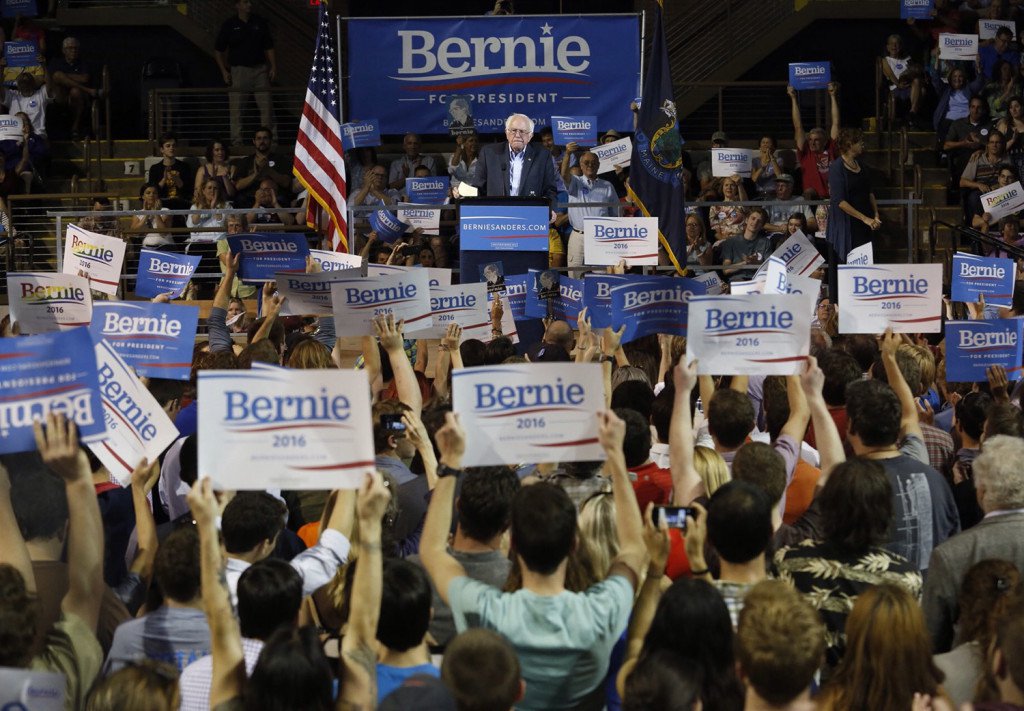 As the weather begins to warm, America is “Feeling the Bern.” Widely dismissed as a fringe candidate at the beginning of his campaign, Senator Bernie Sanders’ (I-VT) rise to a strong contender in the 2016 presidential race points to his platform’s potential appeal with the U.S. population. The self proclaimed democratic socialist wants to “create a political revolution which revitalizes American democracy,” but critics are eager to point out that Sanders would have a difficult time defeating a Republican Congress. His ambitious plans of making college tuition and debt free and to make the wealthy, Wall Street, and large corporations pay their fair share certainly wouldn’t be popular with representatives in Congress who receive so much campaign funding from super PACs. His response? Change Congress. Bernie Sanders’ outsider strategy is a departure from the insider game played by Obama. His success or failure is changing the way American politics is viewed, both professionally and popularly.

Like any elected representative, the President will often assume one of two distinct styles of legislative role—the insider or the outsider—to achieve his or her aims. The insider strategy relies on personal connections to achieve support and compromise. This is often successful when the President works with a Congress of the same party in the majority, such as in the first two years of Obama’s presidency. Unfortunately for him, lower voter turnout in midterm election years allowed Republicans to win control of Congress in 2010. President Obama faced a similar problem in his second term as well; in 2014, voter turnout plummeted to 36.4%, a seventy two year low. Despite his re-election in 2012, Obama’s attempts to work with a Republican Congress have been continually plagued by gridlock. Alternatively, the outsider political strategy is one in which the elected representative appeals directly to the voters through media or other means.

On the topic of how to enact policy change in the United States, Sanders is adamant about one thing: the power of the people. Addressing the difficulties Barack Obama faced in his years as president, Sanders points out, “The biggest mistake Barack Obama made in my view is that after his brilliant campaign in 2008 where he mobilized millions of people, ran one of the great campaigns in American history, essentially what he said to his supporters was, ‘thank you very much for electing me, I’ll take it from here on myself.” Sanders acknowledges that he himself cannot pass any of his ambitious reforms without the support of the people either. “I do not believe that any president who’s standing up for the working class of this country can be successful without a mobilized, activist, grass-roots movement behind him or her.” His stance when it comes to insider vs. outsider politics is clear: “You make change not by sitting down with (Senate Republican leader) Mitch McConnell. You make change when millions of people in this country demand change.”

His strategy seems to be working. Last December, the Sanders campaign broke the record for the greatest number of individual campaign contributions, over 2.3 million at the time. However, the numbers also show that he still has a ways to go. In an election where social media plays an increasingly important role in connecting with voters (many of which are from a younger demographic voting in elections for the first time), quantitatively, Sanders is not the most popular candidate across all social media sites. His Twitter following, at over 1 million followers, trails both Donald Trump (over 6 million) and Hillary Clinton (over 5 million). For Bernie’s outsider strategy to truly work, the power to create change in American politics according to Sanders’ vision is contingent on two key goals. First, popular support online must be translated into real, consistent voter turnout, especially during midterm years, if Sanders wishes to work with a Democratic Congress. Sanders hopes to incorporate “millions of young people and working people into the political process.” Secondly, he must avoid alienating the mainstream Democratic Party. His reputation “[a]s an uncompromising political independent,” is appealing to his voters, but works against him in his efforts to attract “support … among Democrats to turn [his ideals] into law.”

Of course, this is all contingent on Sanders winning the nomination and the candidacy. Should he prove to be unable to win the election, his movement has already made a lasting impact on how the American public engages with politics, from creating dialogue about his ideals, to pushing his competition further left. The Sanders strategy of outsider politics to create a grassroots movement and bring about reform through the power of the voters has changed the nature of American politics, regardless of if he wins his campaign or not. Ultimately, the policies in this nation are made based on the desires of the people who vote, and Sanders intends to make that happen.