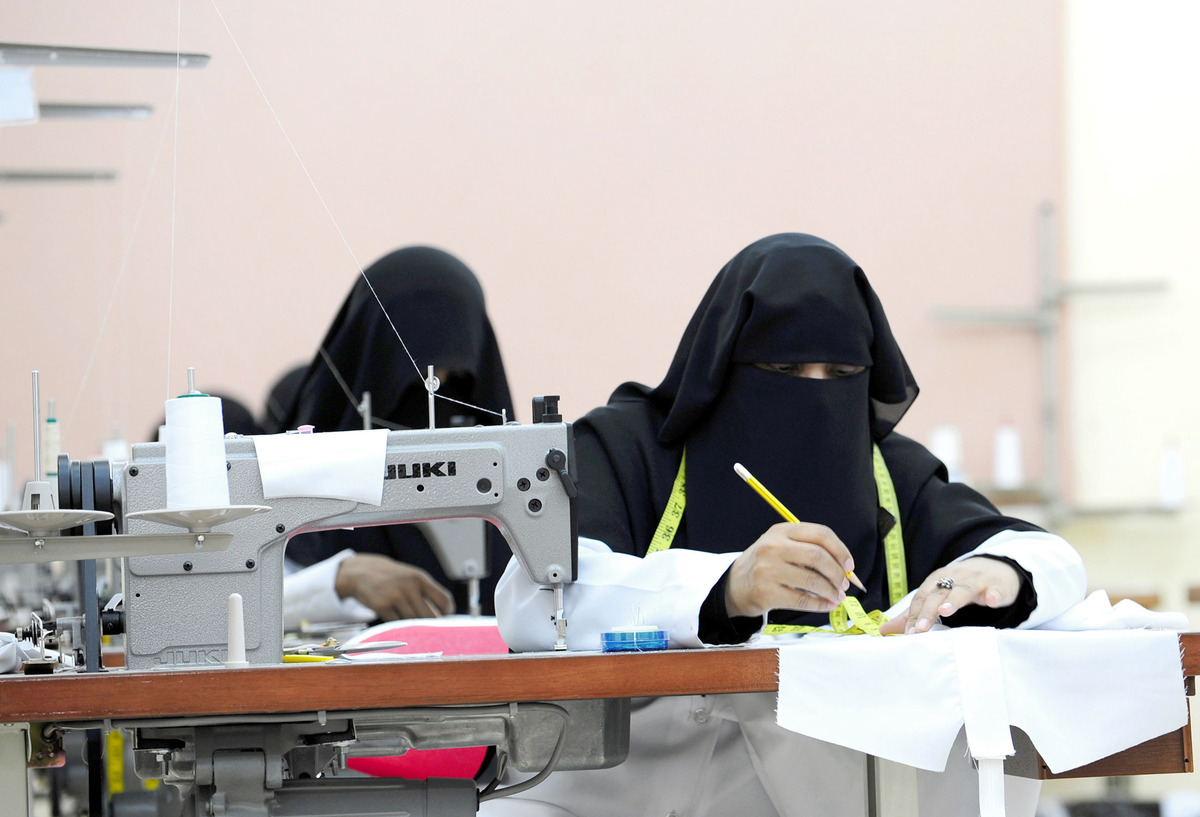 Saudi Arabia, the country where women are not allowed to
go in public without a chaperone,
have individual rights in court,
drive,
wear clothes that show off too much skin,
wear too much makeup,
study engineering, architecture, or political science,
interact with men outside the family,
use swimming pools,
compete freely in sports,
try on clothes in stores,
enter a cemetery,
read an uncensored fashion magazine,
or buy a barbie,

announced in 2012 plans to build an industrial city entirely and exclusively for women. This was Saudi Arabia’s first major effort to improve what is among the world’s worst levels of female employment while remaining “consistent with the privacy of women according to Islamic guidelines and regulations.” Since 2012, Saudi Arabia has made plans for creating three more women-only cities.  Supporters of this unconventional initiative to bring women into the workforce believe these cities represent a huge step forward for Saudi women. However, such cities only reinforce oppressive gender norms because they offer limited career paths and perpetuate segregation. Furthermore, the progress being made on these cities is sparsely and ambiguously documented, suggesting development is slow. Nevertheless, recent reforms in Saudi government and new changes in the private sector suggest Saudi Arabia is indeed experiencing social change, albeit slow and tedious. While these cities are oppressive in nature, they can be leveraged to make positive change, giving strength to ongoing social movements.

A group of Saudi women first came up with the idea of an all women’s city in 2003. The idea was first implemented in the eastern province city of Hofuf with the vision of employing 5,000 women in textiles, pharmaceuticals, and food-processing industries. The proposal to create this industrial complex was approved in just one week, and Madinah Governor Prince Faisal bin Salman personally oversaw its development. While the city employs both men and women, it allocates certain areas exclusively for women. The Governor’s first project was to create a factory that would employ fifty women and produce garments, jewelry, and other household items. His long term plan is to establish more plants across 500,000 square meters and provide female workers public transportation, nursing services, and training institutes. The entire project is estimated to cost $29.6 million. In March 2014, Madinah Governor Prince Faisal bin Salman laid down the initial stone in the first factory’s creation. As of  August 2014, work on building the city was “well under way,” however, no other detailed accounts of the city or its progress have been reported since.

Since 2012, Saudi Arabia has continued making plans for more women’s-only industrial complexes. In March 2015, Saudi Arabia announced intentions to establish the country’s fourth women-only town in Jeddah, the nation’s second largest city, on a space that spans over 5,000,000 square meters. As of 2014, the number of female workers in all of Saudi Arabia’s women-only cities combined, however, had reached only 5,480.

Given the cultural environment, the establishment of all-women industrial cities is shocking to many. Yet Saudi Arabia needs the economic boost that adding women to the workforce can power. The World Bank reports that “economic growth in the Middle East and North Africa (MENA) is stagnating” and that “low oil prices, conflicts, and the global economic slowdown make short-term prospects of recovery unlikely.” Sarah Goodyear at the Atlantic states that the hard restrictions currently imposed on women allow “a potentially huge sector of the productive economy [to] sit idle.” The Saudi Arabian economy needs its women to work whether or not the country’s people do.

There exists much debate over whether these cities are truly a step forward for Saudi women. While these industrial complexes allow women to work outside the home, they are inherently oppressive in concept and execution. First, while government officials promise opportunities for skilled work, these industrial complexes are composed of factories, and consequently, offer mostly menial jobs. Second, the types of work offered in these cities severely limit a woman’s opportunities and further entrench stereotypical norms regarding a woman’s capacity and interests, as the main industries in these cities are textiles, pharmaceuticals, and food processing. Saudi Industrial Property Authority Deputy Director (Modon), Saleh Al-Rasheed, claims that  “I’m sure that women can demonstrate their efficiency in many aspects and clarify the industries that best suit their interests, nature, and ability.” Given that the work opportunities being created are factory jobs relating to home and health, male figures in authority believe that women are best suited to be laborers in just those fields. The heightened demand for female factory workers and such ideologies limit the career paths available to women and disincentivize female higher education, especially in STEM and liberal arts fields.

In addition, cities where women and men cannot work together further perpetuate segregation and unequal treatment of women. All-women and all-men cities will not only be less creative and more inefficient than integrated ones, but also eliminate the possibility for unrelated women and men to learn to communicate, work together, and one day proceed towards an integrated society.

Even though these cities seem to at least offer women financial independence, Saudi Arabia’s laws toward women harshly curtail any potential economic freedom. If a woman desires to buy or sell property, she must go through a court and provide two male witnesses. Those witnesses require an additional four men present at court to verify their credibility as witnesses. In addition, women are not allowed to drive or leave the home without a related male guardian. Therefore, even if women are earning money, political restrictions limit how far that money will go.

While all-women cities fail to empower women, developments in the government and private sector are contributing to a women’s rights movement in Saudi Arabia. In 2011, King Abdullah granted women the right to vote for the first time in this year’s municipal elections. In 2013, he also appointed 30 female representatives to Saudi Arabia’s Shura Council for the first time in history. Meanwhile, increasing numbers of women are joining the workforce nationwide. Since 2010, the number of working women has increased by 48%. Women are now allowed to work in retail and hospitality, and in 2013, practicing certificates were granted to the first female lawyers. The King and the private sector have incentives to employ women and include them in government because they are a vast untapped resource for the country’s economy. They are more educated than men—60% of Saudi Arabian college graduates are female—yet 78% of Saudi women and 60% of female PhD holders remain unemployed, and women make up only 15% of the workforce. The cultural and legal understanding of the duty of a woman contributes to the reason why even educated women seldom join the workforce. A Saudi Arabian Director General stated “the purpose of educating a girl is to bring her up in a proper Islamic way so as to perform her duty in life, be an ideal and successful housewife and a good mother, ready to do things which suit her nature such as teaching, nursing and medical treatment.”

Women in Saudi Arabia are living in a turbulent time. While one end of society tries to further isolate them, another is gradually integrating them. Whether or not all-female cities are truly oppressive, women are undeniably leaving the house more and catching a glimpse of what economic and social freedom may look like. Saudi women have the potential to use their working experience along with their greater civic involvement to demand more rights and employment opportunities. However, only time will tell whether King Abdullah’s promise to “refuse to marginalise women’s role in Saudi society” is a myth or tangible possibility.