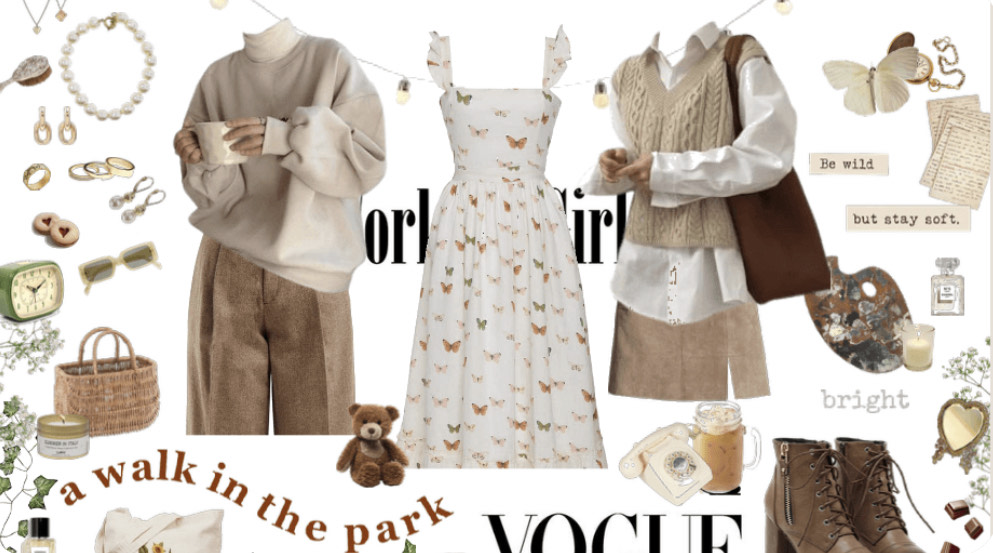 Get Ready for our Newest Style Icon: Capitalism

So you want to be “that girl”? Will that be cash or card?

Though Paris Fashion Week concluded its last show on October 4th, Bella Hadid’s career is just getting started. Hadid walked in a whopping 64 runway shows this season, going viral for modeling in the now-famous spray-on Coperni dress. Countless designer outfits tailored to her body, perfected makeup, and strict diet landed her this comment by a surgeon: “the most beautiful woman in the world according to science.” Now we label Bella Hadid as such.

We love labels. And dressing, looking, or acting in certain ways with no escape.
Despite years of social media and online influence, and after countless trend cycles and seasons, one word continues to reign supreme: aesthetic. An “aesthetic” is a specific yet beautified essence that someone wants to emulate. This applies to fashion and lifestyle choices, to name a few—anyone can have one!

But the process from creating a Pinterest board fit for a dream wardrobe to owning a specially curated collection of “must-have” items is an expensive step. There is a price to pay for how you want to be perceived. And not everyone can afford it.

Bella Hadid’s clout as a style icon has resulted in a surge of Gen Z teens trying to emulate her clothing choices. Her “aesthetic.” But this aesthetic consists of thousands of dollars worth of designer clothing that, sadly, most teens with a minimum wage salary cannot afford.

The concept of an aesthetic rose alongside the popularity of 2010’s websites like Tumblr, which allow users to cultivate digital multimedia that match their personal preference of photo and video. “The platform became known as a petri dish of Internet quirkiness, cultivating subcultures… [now popular] among Generation Z, [who are] forty-eight per cent of its active users.”

A curation of photos exemplifies a user’s personal style in areas of home decor and fashion, catered to the account holder. Like any trend, certain items are sought after in a market. Green parkas and infinity scarves in the 2010s. Bell bottom jeans in the 1970s. Such distinct pieces could mark someone’s fashion choices to mirror a throwback moment in time, but it could also foster the possibility of someone finding you (*gasp*) behind on the trend. And no one wants to be behind the trend. The saturation of vanity on social media platforms has resulted in an awareness of what others are doing, wearing, and using. Supposedly meaning, if no one does, dresses, or acts like you, you’ve missed the train.

In order to survive a social game of who’s wearing what, and what ~vibe~ you radiate, you need to have a look. Not just any look, the look. The look to match your chosen vibe, that is. Interested in a dainty, feminine cottagecore persona? Shop from Brandy Melville for rosette tank tops the size of your hand and buy a pair of platform Doc Marten loafers! What about being a Clean Girl? A bottle of Olaplex No. 3 and Maison Margiela Replica cologne are waiting in your Sephora cart. In other words, to obtain the look, you need the money.

The inching problem of constant influence over what products are “must-haves” to achieve a certain look chalked up to a flow of consumerism. A social game is heralded under a capital one. The human desire for self-satisfaction and to be perceived as such holds infinite power, and a perfected aesthetic is how you achieve it.

But what if you can’t afford thousands of dollars worth of expensive clothing brands and luxury products? How can stylish people show that they do, indeed, have style?

The answer: a dupe. Originally defined as a synonym for deception and short for duplicate, a dupe in the fashion world simply means an inauthentic replica of a highly sought after, albeit expensive article of clothing. Realistically, the online demographic of young adults who constantly watch their favorite celebrities in the same age range flaunting countless designer brands cannot afford Miu Miu and Maison Margiela. So what if the closest thing to dressing just like their fashion icon was entirely possible, but at a fraction of the original cost? Enter: the international dupe market.

Bella Hadid may be dubbed the most beautiful woman in the world, but she is far from this decade’s fashionista. So who is it? Well, she certainly is a favorite of Ronald Reagan’s.

Capitalism makes us fashionable. From infamous child labor-using fast fashion sites like SHEIN to tech giant Amazon, suppliers of “dupe clothing” have made their imprint on Gen Z and Millenials as a trendy and affordable shopping option. Viral cuts of meticulously designed clothing are oohed and ahhed by thousands of social media users, a spectacle literally worth thousands of dollars in profit for knockoffs. Most of the population cannot comfortably afford a consistent influx of the trendiest clothes, but for the most style-aspiring, a few weeks of waiting for sketchy international shipping should do the trick to satiate a commitment to the vanity.

The very source of our aesthetic inspiration isn’t helping either. Not only did they create a foundation for obligated consumerism, they began to cut out the middleman and sell directly from their apps. Pinterest now ingrains ads that align with user searches. Scrolling through beautiful pictures was not capitalist enough. In March 2022, Pinterest unveiled a range of shopping and advertising updates at its Annual ‘Pinterest Presents’ Event. Meaning the app now includes a shopping tab that curates similar items based on your Pins. But the endless stream of Bella Hadid paparazzi shots does not curate the very designer items she wears. Knowing sales will likely increase with affordability, Pinterest recommends dupe alternatives to various stylish shots not just of the supermodel but of realistically unattainable style to the working class.

Blatantly ripping off designers who source materials ethically and make sure to hire for liveable wages, all to produce a cheap knockoff version that the masses can afford, is an evident product of millions of shares, pins, and saves.

The importance of vanity is prioritized over the contributions of environmental deterioration. Because consumers of duped fast fashion see no negative impact of buying cheap, cute clothes, the harmful cycle thrives. Our obsession with an aesthetic ties in with our motivation and commitment to see forth on a desired look.

No matter how many runway shows Bella Hadid walks in the future of Fashion Weeks’ to come, her work will not hold a candle to capitalism’s continuous influence. Trends come and go and the urge to purchase the latest styles ebb and flow, but the need to seem beautiful forever remains. Capitalism secures our desire to be aesthetic. All you need is a full wallet and the right online reference pictures.