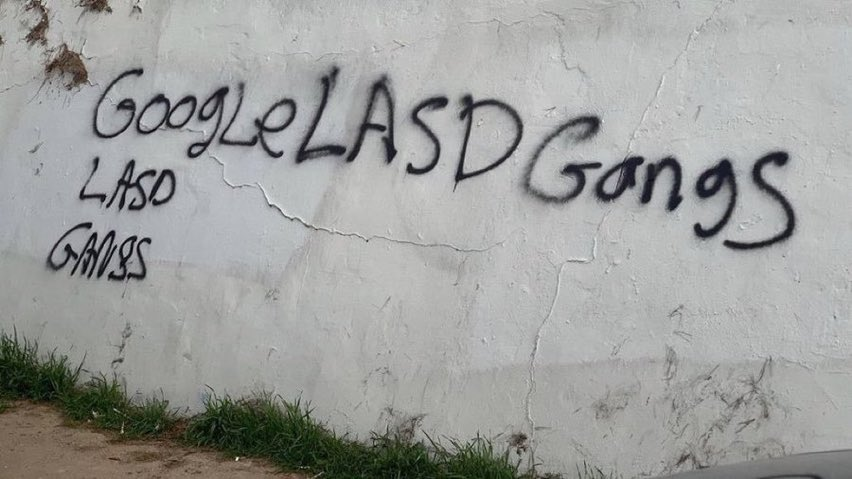 LASD Gangs and Police Mistrust in the United States

Mostly minority and poor communities across the country have complained for decades about law enforcement agencies often behaving more like aggressive criminal street gangs than sworn dutiful police officers. Although genuine efforts to confront the issue at the federal level have been mostly inconsequential, there have been bouts of evidence and shared experiences to support the concerns of people in these neighborhoods.

In Los Angeles, there are plenty of these law enforcement gangs.

LASD Gangs, as they are colloquially known, have a long, deeply rooted history within the city, dating back at least fifty years. There are 18 known gangs within the Los Angeles Sheriff’s Department, including The Little Devils, Posse, The Wayside Whities, The 2000 Boys, The 3000 Boys, The Jumpout Boys, The Banditos, The Executioners, The Spartans, The Cowboys, The Rattlesnakes, and The Tasmanian Devils. These groups are typically formed at mostly white police stations in majority Black and Latino communities—so called “ghetto” stations according to a 1992 study commissioned by the County Board of Supervisors.

They are all known to have things in common. Usually a hand signal, gang tattoos, and tactics required to join. These tactics are known to include falsifying paperwork and the killing of a civilian. These actions qualify these groups as gangs under the California Penal Code, which defines a criminal gang as three or more people that have a common name or identifying sign or symbol, has, as one of its primary activities, the commission of one of a long list of California criminal offenses, and whose members collectively engage(d) in a pattern of criminal gang activity. Sheriff’s gangs fit this description.

According to a 2021 RAND corporation study, most deputies viewed subgroups as forming not for wicked purposes but as a way to recognize a common bond, express pride in their work, and that most invitations to join a subgroup were likely based on “friendship and perceived competence.” They also purposefully recruit “only hard-charging crime fighters, especially deputies who have committed shootings.” These justifications are often contradicted by their secrecy, lack of efforts to supervise them when necessary, and negative behaviors such as harassment and violence.

“I think the misconception that people have with Black Lives Matter is that they only represent Black lives,” said Lisa Vargas, the mother of Anthony Vargas, a 21-year old man who was shot 13 times and killed by Los Angeles police back in August 2018. Vargas is just one of many Latino mothers seeking to get their children’s names involved in the national conversation on police violence against black and brown people. The mothers of Paul Rea, Sean Monterrosa, and Andres Guardino have also spoken out against the deaths of their sons at the hands of the Los Angeles Sheriff’s department. The women claim that their children were targeted for their ethnic identity and that the police lacked motives for opening fire. They believe that if their children ran from the police, it was because they were scared. As is often the case in police shootings of Black men, law enforcement officers have stated that they acted in self defense and thought the victims had a weapon. No one has been charged in the deaths of Vargas, Rea, Monterrosa or Guardado.

The families of the victims also allege that some of these deputies were members of gangs within the Los Angeles Sheriff’s Department—a claim that’s been backed up by interviews with current deputies. “There’s been multiple occasions where … [the police] say, ‘Hey, we got a guy that has a gun and he’s running from us.’ In reality that person never had a gun,” one deputy of the department said. And although the majority of police deputies in Los Angeles are also Latino, another deputy said the gangs “do [racially] profile.”

These alleged gangs have killed at least 19 people, all of whom were men of color and many of whom were in mental health crises at the time of their murders. The county keeps a running tab of deputy-gang related legal claims—with cases costing the county $54 million since the 1990s. Last year, journalist Cerise Castle penned an investigation into gangs within the Los Angeles Sheriff’s Department. The 15-part investigative series published by Knock-LA discusses the long, deep history of these gangs, and how their actions remain prevalent today. Castle’s reporting also includes a database of LASD employee’s names (and if applicable, badge numbers) that have been affiliated with deputy gang activity.

In March of 2022, LA County’s Civilian Oversight Commission (COC), whose mission is to oversee and improve the accountability and public transparency of the sheriff’s department, announced that it will be launching a full scale investigation into these deputy gangs. The announcement comes roughly a year after Castle’s reporting was released. “Deputy gangs have fostered and promoted excessive force against citizens, discriminated against other deputies based on race and gender, and undermined the chain of command and discipline,” said Sean Kennedy, Commission Chair and Executive Director of Loyola Law School Center for Juvenile Law & Policy. He continued, “Despite years of documented history of this issue, the Department has failed to eliminate the gangs.”

Castle told NPR, “It was quite a full-circle moment for me to see that an independent investigation into these deputy gangs is being pursued.” Since her project was released, Castle has seen multiple occasions where LASD deputies and their gangs take “egregious actions” against civilians in LA. Her investigations into LASD gangs will continue: “Many stories do not make it into the news,” she said.

In addition to the important reporting of Los Angeles based reporting and investigations through journalists and county boards, activists have been bringing attention to the issue.

The People’s City Council of Los Angeles, an actions-oriented coalition of social and climate justice organizations and organizers from all over Los Angeles has been bringing attention to this issue through online platforms such as Twitter. In an interview, Phillip Kim, a member of PCC’s coalition, told BPR how one of the reasons for PCC’s increased engagement with broadcasting the actions of the Los Angeles Sheriff’s Department was to “center the conversation on those affected, not a political theory or party.” Further, Kim states that PCC’s decision to bring more attention to deputy gangs is that “family members who had been on social media calling out the sheriffs department for having murdered a family member were being harassed; they were getting death threats and having pictures of them sent to their phones they had no knowledge having been taken.”

Sheriff Alex Villanueva has been accused of intimidating the families of people killed by his deputies. The Check the Sheriff Coalition, which includes PCC stated:

“In recent weeks, Villanueva has twice publicly named and targeted family members who have openly protested deputy killings of their loved ones in an attempt to bolster his own political agenda, denigrate the character of these families and their loved ones.”

The Check The Sheriff Coalition supports a reform measure to aid families most affected by deputy gang violence by supporting charters to hold LASD accountable. They argue that “the L.A. County Charter should be amended to allow for impeachment and removal of the sheriff by a four-fifths vote of the Board for serious violations of the public trust, including serious crimes, unconstitutional conduct, and abuse of power.”

“In this case, it’s about how LASD Sheriff Alex Villanueva has completely ignored the calls to bring attention to this issue. The board of supervisors will ask him to show up to hearings about these gangs and he could just say ‘I’m busy that day!”, and just not show up,” Kim states. “There really seems to be no way to hold them accountable. What we’re working on as a way to change their system is at least one level of accountability for the sheriff.”

Going forward, the main obstacle for reform is the denial on behalf of the LASD. LASD Sheriff Alex Villanueva has stated that the inquiries into his department over these allegations are “just a ‘fishing expedition’ and political theater.” He wrote, “Not one elected official, or their political appointees, have provided me even one name” of a deputy involved in gangs.

Although in the past Villanueva has repeatedly stated that he is the first Sheriff to address the issue, he also stated that the groups “do not exist,” and that he has “yet to find one.” He stated that the idea of deputy gangs is a “straw man” created by “people with their own agenda.” He immediately contradicted that notion again in his next statement saying, “There’s cliques everywhere. Every single police station, I guarantee you… there’s nothing deviant or dark or scary about it.” With the upcoming 2022 sheriff’s election, many are hoping that Villanueva will be unseated, and have found his reaction to LASD gangs unsurprising, yet unsatisfactory.

The investigations, reporting, and calls to action on this issue in Los Angeles are becoming increasingly more common and welcomed by people across the county. With this changing outlook on the actions of law enforcement all across the county, there is good reason to hope that other oversight bodies will follow Los Angeles’ lead.