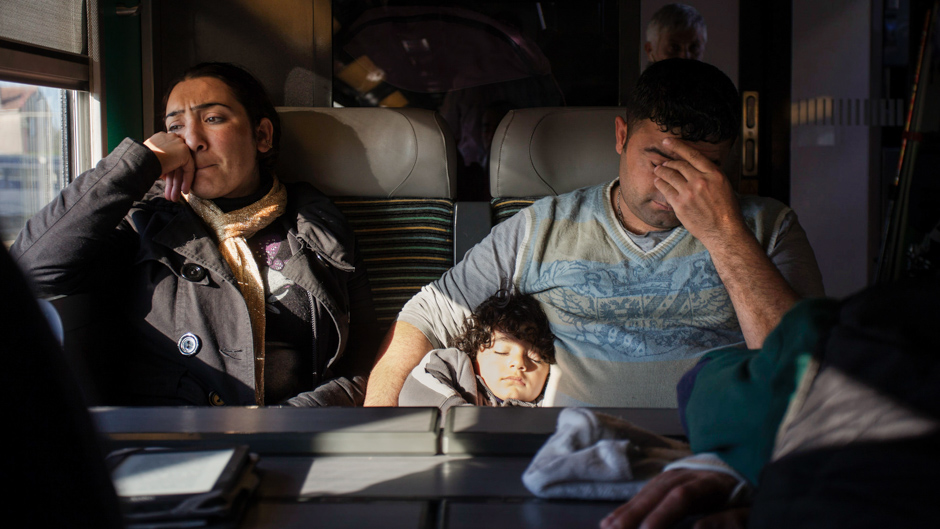 The Mental Health Challenge of Migration

Since the morning of February 24, when missiles first rained down and troops stormed into Ukraine under the direction of Russian President Vladimir Putin, 7.8 million Ukrainians have fled their besieged homeland. The majority have arrived in neighboring European countries, where they await the assistance of foreign governments. As the European Union (EU) grapples with the influx, one pervasive yet little-discussed aspect of migration requires lawmakers’ attention: mental health.

“One word often used by our monitors in relation to the Ukrainian refugees is trauma,” Julia Hall, Deputy Director for Research at the human rights organization Amnesty International, explained to The Lancet. “There are lots of people who are deeply traumatized by what they have been through. Many are still in utter shock at the sheer speed at which their lives have been turned upside down. The issue of mental health care is going to be a big one.”

Today, 103 million people are forcibly displaced worldwide, with 32.5 million refugees among them. The decade-long calamities in Syria and Venezuela are currently fomenting the most severe refugee crises, although the Ukrainian exodus, not yet a year in duration, has already joined them as one of the largest in the twenty-first century. While each situation around the globe is different, all refugees are caught in the crosshairs between persecution at home and the insecurity of roving abroad. The very nature of the refugee experience is fraught with mental health dangers.

An abundance of existing research documents the mental health impacts of migration. A 2005 study concluded that, among adult refugees settled in Western countries, an estimated one in ten has post-traumatic stress disorder (PTSD), one in twenty has major depression, and one in twenty-five has generalized anxiety disorder, with considerable overlap between the three. Similarly, in 2016, the Swedish Red Cross determined that rates of depression, anxiety and poor well-being are “at least three times higher” among refugees compared to the general population. And this March, the World Health Organization (WHO) reported that about half a million Ukrainian refugees in Poland need support for mental disorders, which the WHO defines as “a combination of abnormal thoughts, perceptions, emotions, behaviour, and relationships with others.”

Separate from true clinical mental disorders, medical professionals have identified a set of anxious and depressive symptoms that naturally result from the stressors of modern migration. In 2002, Dr. Joseba Achotegui termed this stress response “Ulysses syndrome” after the mythic Greek hero whose name has become synonymous with a long and perilous journey. Left untreated, the Ulysses syndrome symptoms can denigrate into a true mental disorder.

The factors underlying these findings are hardly mysterious. All stages of migration, from departure to resettlement, can expose refugees to mental duress. The first site of mental-health endangerment is a refugee’s native soil. One Doctors Without Borders (MSF) study of asylum seekers found that over half had experienced potentially traumatic events prior to departure, and surveys suggest that the most common pre-departure traumatic events include combat situations, sexual assault and witnessing violence and death. Once abroad, the risks only multiply. Nearly 90% of asylum seekers in the same MSF study reported trauma en route to their destination, where migrants may be exposed to harsh conditions, exploitation by smugglers, physical and sexual violence and torture. Other sources of stress, such as separation from loved ones and loss of control, may persist even if a refugee manages to safely resettle. All of these stressors can both exacerbate pre-existing mental health conditions and induce disorders in previously healthy individuals. Moreover, language barriers, cultural stigmatization of mental health conditions, and unfamiliarity with health care systems in foreign countries pose post-migration hurdles to obtaining care; as a result, migrants are less likely to seek out care for mental health conditions compared to the general population.

In a world where just 2.1% of total government health expenditure goes to mental health, an inadequate response to refugee mental health is, sadly but predictably, par for the course. On the whole, there is a yawning gap between refugees’ needs for treatment and the capacity of current services to accommodate them.

The EU provides an illustrative example. The 27-state bloc is an attractive destination to migrants, hosting more international migrants than any other continent. The promise of economic opportunity and cultural openness in Europe, coupled with the “push factors” of political instability and poverty in sending countries, draws hundreds of thousands of migrants to EU Member States each year. But despite legal provisions that address mental health, the EU’s policy framework often fails to ensure that migrants’ mental-health needs are accounted for.

The Reception Conditions Directive sets the standards for the reception of applications for international protection in the EU. Under Article 11 of this legislation, the “health, including mental health, of applicants in detention who are vulnerable persons shall be of primary concern to national authorities.” Article 21 covers “persons with mental disorders” under its definition of “vulnerable persons” and requires Member States to take the “specific situation” of these individuals into account. However, there is no consensus on whether and how this provision applies to asylum seekers, and individual Member States interpret the provision in different ways.

More concerningly, most Member States do not have formal procedures to identify mental disorders in asylum seekers. Initial health screenings focus on physical disabilities and communicable diseases; consequently, mental disorders may be overlooked. Individuals suffering from mental disorders may end up in accommodation centers that lack access to appropriate mental health services, and without cultural mediators and interpreters, they may be unable to access care even when such services are available. Compounding these obstacles are fears among refugees that a mental-health diagnosis could delay their asylum application or force them to receive therapy, leading to reluctance to undergo psychological assessments. Worse still, many Member States prevent refugees from integrating into society until being granted asylum, which brings detrimental repercussions for mental health.

“This waiting in fear of being sent back to the countries they fled piles on more stress—and so adds to their cumulative risk of mental health problems,” concluded Hannelore Ehrenreich, a neurologist and psychiatrist at the Max Planck Institute of Experimental Medicine who conducted a 2020 study on refugee mental health.

It should be noted that even within refugee groups, mental health effects are not equally distributed. The WHO in Europe has emphasized that child refugees, especially those unaccompanied by a guardian, are especially vulnerable to mental disorders. Additional research indicates that women have the highest incidence of PTSD among refugees, and antenatal mental disorders represent a female-specific threat to mental health. Formal legal status also comes into play: a study in Switzerland by psychologist Martina Heeren concluded that migrants awaiting an asylum decision had double the rate of depression as recognized refugees. These discrepancies further complicate the picture of refugee mental health and underscore the need for targeted solutions.

The implications of mental health struggles among refugees are worrying, to say the least. To begin with, mental disorders can interfere with refugees’ ability to navigate the asylum proceedings in host countries. In credibility assessments, for example, asylum seekers must prove that they have a well-founded fear of persecution if they were to return to their country of origin. Mental health disorders can trigger memory loss or misrepresentation of events, creating difficulties for the authorities in assessing the asylum seeker’s credibility.

Beyond the impediments to obtaining asylum, mental disorders can interfere with individuals’ prospects for social and economic integration once accepted into a host country as asylees.

“If you have constant flashbacks, severe anxiety, insomnia, nightmares, depression, memory lapses or other symptoms of PTSD and torture trauma, it can be very difficult to maintain social relationships or a job,” Asger Kjaerum, the director of advocacy for the nongovernmental organization International Rehabilitation Council for Torture Victims, told Al Jazeera in February 2016.

Kjaerum’s comments came in the wake of the 2015–2016 refugee crisis, in which an unprecedented 1.3 million migrants applied for asylum in EU member states as conflicts in the Middle East sparked mass displacement. Now, with refugees once again overwhelming the EU’s borders, it is high time for Member States to overhaul their migration policies to actively promote refugees’ mental welfare.

In the long term, a suitable first step would be clarifying the definition of vulnerable groups, resolving the current legal ambiguities. Regarding accommodation centers for asylum seekers, Member States could take measures to identify mental disorders early on, to incorporate mental health-specific evaluations into initial screenings and to provide culturally and linguistically appropriate services. Along these lines, the WHO has defined a series of good practices, among them, developing mental health outreach services and training mental health professionals to work with migrants. Additionally, the WHO has recommended integrating mental health services into primary care settings, where 10–20% of migrants seek mental health support each year. These policy initiatives would take time to develop and implement, but the benefits for refugees’ mental health would be immense.

Meanwhile, most short-term solutions involve mobilizing funds. As Ukrainian refugees flood Eastern Europe, the region will need to invest more in psychological services. Poland, for example, which has taken the most Ukrainian refugees thus far, has just nine psychiatrists for every 100,000 people⁠—a third of the rate of Germany. The European Commission has also acknowledged the critical role of non-state actors, allocating €9 million in April for non-governmental organizations working in mental health and trauma support. As the toll of Ukraine’s invasion continues to mount, these efforts, particularly if taken collectively by Member States, could soften the human costs of the Kremlin’s avarice.

As Arash Javanbakht, a professor, psychiatrist, and researcher at Wayne State University, commented to The Lancet, “Medical trauma is abundant in refugee crises like this one. Research has shown that the consequences of human-caused trauma can be much greater and can last longer than the consequences of trauma induced by, for example, natural disasters. The sooner treatment is given for trauma, the better, so the sooner countries taking in refugees start dealing with this, the better.”

Migration and mental health are two of the most salient global challenges of this century. As separate issues, each calls for coordinated action on the part of state actors. Where they intersect, they demand it.