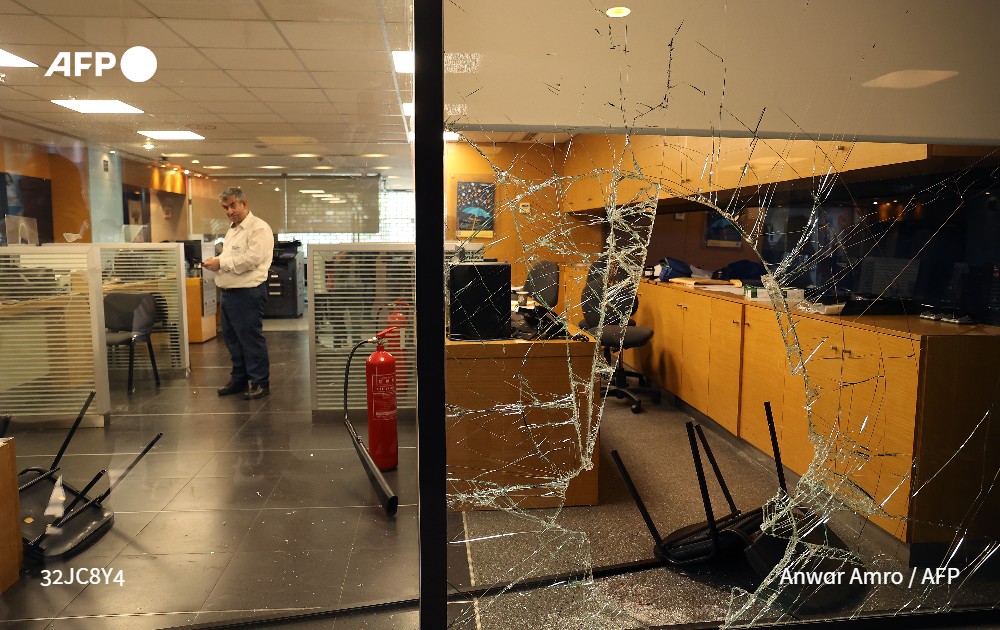 Lebanon in Crisis: Nothing More to Lose?

“I have nothing more to lose.” These were the words of Lebanese citizen Sali Hafiz after storming a bank with a toy gun to withdraw her own money. Her widely publicized action, which she said was to pay for her sister’s medical bills, triggered a second wave of bank “robberies” in Lebanon. Despite this, the authorities were wise enough to let her off with a fine; most in Lebanon consider her and others, who have been driven to assertively demand their own savings, heroes.

Now, three years into one of the worst economic crises in modern history, it seems the only ones with more to lose in this disaster are those responsible for it. Lebanon’s elites have deliberately prevented political action towards recovery, watching over a rapid deterioration of living standards, and even the beginnings of a refugee crisis, all with complete impunity.

Lebanon’s deep-rooted political paralysis is driven by two factors: a financial class willing to derail an entire country’s future for the sake of its shareowners, and an allied sectarian elite that holds on to political power through an identity politics based on fear and dependence. By sowing division within Lebanon’s people, these two classes have so far remained unscathed.

A History of Parasites

The current financial crisis began around August of 2019 when Lebanese banks, finding themselves low in dollar liquidity, started introducing “informal capital controls,” or arbitrary restrictions on withdrawals for their depositors. However, the root causes of this crisis lay farther back. From its beginnings as an independent country, Lebanon’s political economy has been defined by sectarianism and financialism. In 1943, Lebanon’s elites agreed to the “National Pact,” an informal arrangement for sectarian power-balancing. For example, the President was always a Maronite (Christian), the Prime Minister a Sunni, and the Speaker of Parliament a Shi’i. Over the next three decades, certain economic sectors, such as tourism and commerce, experienced significant growth. But it was finance that would be the economy’s centerpiece, adorned with special legal protection from bank secrecy to a total lack of capital controls. Meanwhile, negligence of industrial policy caused growth in the industrial sector to be limited and stunted.

With industrialization stagnating in favor of the financial economy, urban unemployment and social inequalities intensified significantly in the 1960s. Combined with the arrival of the Palestinian resistance in the early 1970s, these factors led to the outbreak of the Lebanese Civil War (1975-1990). The war was defined by intense fighting both between and within religious communities, eventually devolving into protection racketeering as sectarian militias exploited their communities amid the chaos. As Lebanon was invaded and occupied by foreign powers, the authority of the state more or less disintegrated. The end of the war with the 1989 Ta’if Agreement merely reproduced previous sectarian structures, but in even more parasitic terms. The collapse of the welfare state during the war had resulted in sectarian elites taking up social welfare provision, which they now happily continued. Simultaneously, sectarian elites established political patronage networks that furthered their survival as a class. This was all funded, of course, through the looting of public resources, made possible by an ever-multiplying public debt. This system of organized corruption continually reproduced the division of religious communities and their dependence on sectarian politicians. Moreover, it creates a fundamental undermining of the nation itself, as the state is co-opted from carrying out national goals such as physical security, economic development, or equitable distribution of social resources; rather, the state becomes a host body for parasites—who, though competing with each other for blood, are nevertheless unitedly interested in continued control over the body.

Unsurprisingly, relations between the banks and these sectarian politicians ran deep, such that, in 2019, an estimated 43% of assets in the commercial banking sector were owned by the politically well-connected. The bond between the political and financial classes thus remained strong postwar. The war induced significant changes in the Lebanese economy, particularly hyperinflation that led to depreciation and dollarization, causing the central bank Banque du Liban (BdL) to pursue a monetary policy pegging the Lebanese lira to the US dollar. This eventually led to overvaluation, cheapening imports but harming the competitiveness of Lebanese industry. Lebanon’s non-tourism export sector, especially devastated by the war, has since remained emaciated; arguably, given the country’s stagnant productivity growth, industrial capital in Lebanon never truly recovered from the war. Finally, an unbalanced postwar reconstruction effort left the country with a large foreign currency-denominated public debt and a real estate bubble that fueled the financial sector.

The path to collapse

In 2011, Lebanon began facing persistent annual balance of payments deficits, mostly caused by its trade deficit, along with a slowdown in capital inflows (specifically deposit inflows due to the end of Lebanon’s real estate bubble and the decline of Gulf petrodollars/remittances). This required an increasingly vigorous defense of the currency by BdL, diminishing BdL’s forex reserves in the process.

To counter the depletion of its dollar reserves, as well as to soothe the strain of debt service for the Finance Ministry, BdL launched in 2016 a “financial engineering.” Many have characterized this policy as a Ponzi scheme, only if the participants were all the commercial banks in a country, and the money being played with were an entire people’s savings. BdL exchanged lira-denominated treasury bills for equivalent dollar-denominated eurobonds newly issued from the Finance Ministry, so it could finance an astounding effective interest of 15% on dollar deposits from commercial banks. So, at the expense of their own dollar liquidity and lending to the real economy, banks poured dollars into new deposit accounts at the central bank. And, although BdL’s dollar reserves grew, its net reserves actually fell into the negative, as its dollar liabilities rose more and more. At the same time, the Finance Ministry, by significantly enlarging its dollar-denominated debt, put itself at increasing risk of default. BdL was wringing the economy dry for dollars to drain into the forex market; something had to give eventually.

By 2019, banks’ dollar liquidity had reached a crisis point. This is what triggered those “informal capital controls” on people’s bank accounts, thus forcing depositors to the forex black market, where the lira began depreciating. Then, on October 17, in a futile attempt to fix its fiscal position, the government announced new regressive taxes on tobacco, gas, and, insultingly, WhatsApp voice-calls.

At this straw, the camel bucked. Overnight, the streets filled with protest in an “October revolution,” as people released years of frustration, shouting nationalistic rhetoric, condemning sectarianism and corruption. To prevent a run on the banks, all commercial banks closed down for a few days. When they reopened, withdrawal limits of dollar deposits had been extended to the extreme. The lira continued to depreciate, and pass-through inflation commenced its steep climb. As people lined up at their banks and desperately hoarded dollars in cash, bankers themselves moved billions out of the country. Lebanon eventually declared a sovereign default on March 9, 2020, when the government missed a eurobond payment. On March 23, the Finance Ministry, to protect BdL’s forex reserves, suspended all eurobond payments, effectively wiping out much of the assets in the banking system. This marked the collapse of both the financial system and much of government spending.

Following the default, the Lebanese government put forward a Financial Recovery Plan (FRP) that proposed to spread the losses across large depositors, the state, and banks’ shareowners. But the banks wouldn’t have it: the plan was attacked by the Association of Banks in Lebanon (ABL) until it had to be abandoned in Parliament. The banks pretended to be acting in depositors’ interest, but in reality they were the ones who’d already imposed a massive haircut on depositors through withdrawal limits. The banks leveraged their political influence to drag out the crisis, for the longer they delayed recovery, the more they could transfer losses onto the people.

Anything more to win?

The Lebanese government’s inaction demolished the livelihoods of its ordinary citizens. From food and fuel shortages, recently exacerbated by global crises, to a 64.7% youth unemployment, people are in extreme desperation. For many workers, even just the cost of going to work exceeds their income. Not to mention explosions in thefts and violent crime, the record increase in suicides is a tragic testament to the cruelty of it all. And in a country where a refugee crisis was previously unimaginable, many are now trying to get smuggled out by boat. It’s understandable, then, why people are ready to take matters into their own hands. For the first time, individuals are ready to hold hostage the banks which have been holding them hostage for so long. The first bank holdup incident happened back in January, when small business-owner Abdallah Assaii entered his local bank branch with gasoline and a lighter for the money in his savings account. The sudden increase in incidents in recent months is a sign of an increasingly desperate situation.

More and more, there seems to be an implicit political message behind these individual acts of desperation, threatening the possibility for organized uprising. The widespread enthusiasm with which Lebanese have received these incidents points to a pervading desire for revolt. Yet, although a potentially revolutionary situation may be developing in Lebanon, there are no signs of any organized politics that could actually threaten the power of the rulers. The bank incidents are merely a reflection of the people’s conditions; they aren’t transformative political action.

The question of a truly revolutionary movement in Lebanon thus remains open-ended. The story of the October protest movement and its failure to transcend sectarianism for more than a few days has demonstrated the structural nature of sectarian political culture. Despite people’s political will for united historical action, politicized religious communities are ultimately more driven by fear of each other and more tethered to their own sectarian elites, whose structures are difficult to escape. But this challenge is not unique to Lebanon at all. If there’s one comfort for Lebanon, it’s that, from racism to tribalism to communalism to sectarianism, the fight against a destructive politics based on politicized identities is a global struggle.

While it seems that the solution for Lebanon’s short-term economic recovery is certainly difficult, it doesn’t appear impossible. It’s the long-term political resolution, however, that presents the heroic task before Lebanon. Lebanon needs a movement that can bring about the political euthanasia of its sectarian and financial elites, and thus a total transformation of Lebanon’s political economy. To achieve this not only requires a movement explicitly anti-sectarian in its political culture, but determined to build a secure and equitable economic order in which religious identities can be safely depoliticized. Only history can tell if this is possible. But Lebanon isn’t alone; undoubtedly, people across the world are looking to Lebanon for inspiration in this struggle.