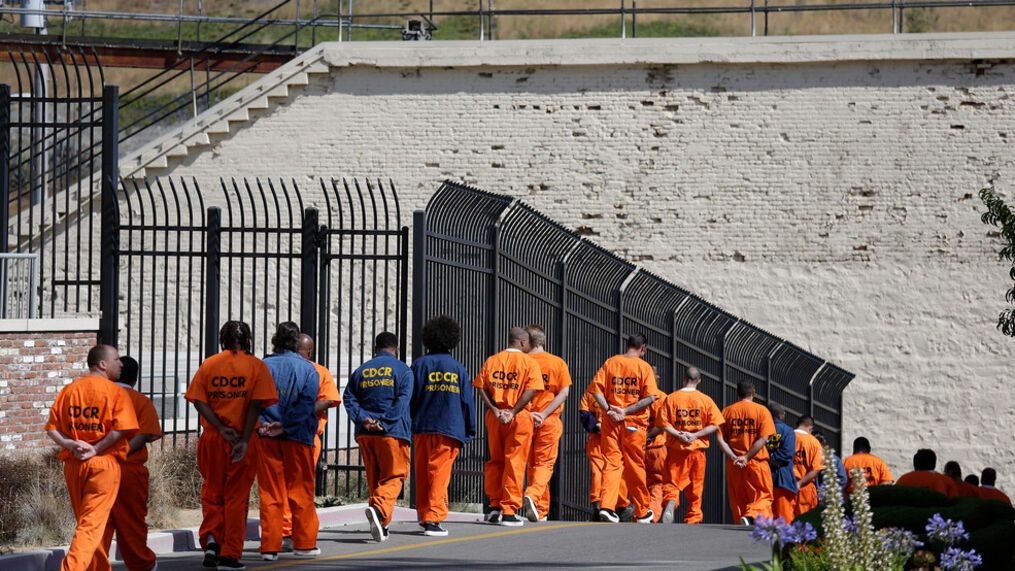 California: the golden land of opportunity and new beginnings. But for whom? Those idyllic visions of gold and success are out of reach for the around 115,000 inmates currently incarcerated in the California prison system, filling 137.5% of the design capacity for 35 state-operated prisons.

This number might seem low, given how many people live in California, but this number only counts people incarcerated in prisons, state-operated facilities reserved for felony convictions. Shorter sentences—generally less than a year—are carried out in jails, which are owned and operated by local authorities.

In recent years, especially after the George Floyd protests, activists have been pushing for wider prison abolition, since the protests brought greater awareness of systemic bias and abuse within the U.S. prison and justice system to a wider audience. The path to widespread prison abolition starts with closing down existing prisons and reducing prisoner numbers. A May 2022 state budget revision set by Governor Newsom suggested closing down three state-owned prisons. This budget was seemingly a victory for activists, as there would be more money in the state budget to focus on other modes of community support, such as focusing on community policing and mental health crisis workers. This victory was furthered by the confirmed closure of a prison in Susanville by June 2023.

However, closing prisons is not always a win-win situation. Rural areas in California consist of 55% of the state’s land, but only contain 9% of its population. Additionally, the average household income is about $10,000 less in predominantly rural counties than urban areas. Rural areas have also suffered the most from drought conditions, less access to education, a shortage of primary care doctors, and more negatives brought forth by less prosperous economic conditions.

Examining this map of prison locations in California, most are located in rural, far-flung parts of the state. There is only one state prison in the entirety of Los Angeles County, even though Los Angeles County is the most populated county in California. One of the prisons slated for closure is located in Susanville, CA, where prison workers make up 45% of the entire town’s employment. Susanville opposed the plan to close its prison and sued the state in court to keep the prison open. This lawsuit failed, but raises a new side of the issue to consider: Why do people want to keep prisons open?

Susanville community members have been furiously supporting grassroots organization efforts against the closure of their prison, such as the lawsuit against the state. The Susanville prison employs over 700 people, and closing it means a loss of well-paying government jobs with pensions, paid leave, and other benefits. While another state prison is located in the same county, there are not enough jobs at that prison for all the people who will lose their jobs at the Susanville prison. Therefore, prison closures could easily exacerbate the income and welfare gap between urban and rural areas in California.

To the residents of Susanville, their town was transformed by the prison moving there. According to the New York Times, Susanville went from a frontier town to a humming town with job opportunities and flourishing local businesses due to the income provided by the prison system. By closing prisons, this stable life of Susanville residents was pulled out from their feet and crumbled into dust.

The Republican party is also critical of prison closures. In particular, California Senator Dahle, the Republican candidate for governor in 2022, has been voicing his opinion on the matter by holding himself up as a champion for public safety. On Sen. Dahle’s campaign website, he states that “the rights of criminals shouldn’t come before those of the victims,” suggesting that he intends on taking a hard-on-crime stance. In an interview with Cal Matters, he supported greater funding for law enforcement to “get violent criminals off our streets.” Sen. Dahle also declared that his “priority will be protecting families, not emptying prisons,” in an interview with the San Diego Union Tribune. More interestingly, Sen. Dahle happens to represent Susanville in the California senate.

State Republicans have also been hammering down on increased crime rates in California under Democratic leadership, such as homicide rates rising in recent years. Sen. Dahle directly opposed the closure of the prison in Susanville, arguing that the closure was a public safety issue that would also affect the livelihoods of his constituents. Therefore, the issue of the Susanville prison is likely to reoccur in Republican messaging against Gov. Newsom during the election.

Although there are concerns regarding the closure of state prisons, there are also potential benefits to all Californians. According to prison abolition advocates, prisons are an ineffective way to punish social problems, as prison sentences lack evidence of effectiveness, and create a cycle of social isolation that is hard to break. Prison also dehumanizes incarcerated people and forces them to work, effectively resulting in indentured servitude. Additionally, the state demographics of who goes to prison are extremely skewed. In 2017, the year of most recent data, 28.5% of male prisoners were Black, compared to only 5.6% of state residents, a five-fold increase.

According to the California Legislative Analyst’s Office, closing 5 prisons by 2025 would save the state $1.5 billion, reducing California’s $150 billion in debt. Additionally, within a statewide survey of California issues done by the Public Policy Institute of California, Californians named the economy and inflation as the largest issues the state currently faces. Thus, making a dent in California state expenditures would, in theory, benefit all Californians by freeing up state budgets for community programs and infrastructure  improvements.

In addition to the widespread financial benefits of prison closures, there are political incentives that could be motivating the initiative. Gov. Newsom is up for re-election in 2022, and supporting a proposal that would save the state a significant amount of money would give him political capital in the short term election and for any future political aspirations. Another reason why he might want to close prisons is to appeal to the more politically progressive side of Democratic voters. During the March 2020 Democratic primary in California, 49.2% of primary voters voted for either Bernie Sanders or Elizabeth Warren, both extremely progressive Democratic candidates who support major prison reform. While California is still a blue state, young Democratic voters are more likely to lean progressive, and therefore approve of candidates who deviate to the left from the typical Democratic beliefs. With the bid to close prisons, Gov. Newsom demonstrates his progressive bona fides, buying him goodwill with a group of voters that could easily try to mount a more progressive challenger in the future.

I believe that the real path to change starts with not simply closing prisons, but major prison reform. An ideal bill would include provisions for equal pay to prisoners, mandate an end to solitary confinement, and ensure pathways for previously incarcerated people once they leave prison, such as job pathways or effective career training. In 2020, Gov. Newsom stated, “I think it’s incumbent upon us to do more and better in the rehabilitative space,” implying that he supports prison reform for altruistic reasons. However, he recently vetoed a state bill that called for limits on solitary confinement in prisons, a practice that causes long-lasting psychological harm. Furthermore, California lawmakers on both sides of the aisle opposed a bill that proposed ending forced work for incarcerated people, where incarcerated people would be paid at least minimum wage for any prison labor they carried out. The California Department of Finance said it would cost $1.5 billion to pay inmates minimum wage for the work they carry out, which led lawmakers to vote against the bill.

The California Department of Finance, in opposing the bill that proposed ending forced prison work due to increased costs and operational difficulties, admitted that the state cannot afford to pay prisoners for the work they do. Incarcerated prison labor was on the front lines for both fighting the recent California wildfires and for working during the COVID-19 pandemic to create masks and hand sanitizer, while getting paid $0.08 to $0.37 per hour for their essential labor. Despite California needing the forms of work that prisoners do, such as the millions of hours that prison fire crews have spent battling California wildfires, the state is unwilling to pay minimum wage for life-endangering and hazardous conditions that benefit the lives of every other Californian. Simply closing prisons, without further reform, will not stop this cycle of labor exploitation and emotional cruelty inflicted upon incarcerated people.

In addition to the emotional and physical toll that prison takes on incarcerated people, we also cannot ignore what closing prisons will do to the towns supported by the employment prisons bring, such as in Susanville. Prison towns are similar to the company towns of the Industrial Revolution, where every resident’s life revolved around one employer. In the past, when cities or towns revolving around one industry, such as Detroit, lost that industry, the human cost was failing relationships, depression, and suicide. This emotional toll comes from the loss of income and economic stability, as even if residents didn’t work in the prison, the salaries of those who did supported other local businesses.

If more prison towns go the way of Susanville, the already massive income disparity and opportunity disparity between Californians will continue to rise. Without any provisions for the fate of towns such as Susanville after the prison is closed, the plan to close prisons is also economically damaging for many Californians. Unless there is deeper systemic change, Gov. Newsom’s plan to close prisons does not solve any problems, and instead creates a host of new economic and social problems for future generations seeking the golden fields of California.

Recently, a California prison reform bill passed the Assembly. Unfortunately, it misses the mark on true change, despite promising a veneer of progressive ideas. The bill essentially gives private employers a pool of potential ex-incarcerated people that they can hire for the jobs they need most; this would lead to prisoners turning in their prison shackles for the slightly less cramped shackles of low-paying jobs at hugely profitable corporations. Therefore, this bill is simply a mercenary economic equation, instead of a step to actually help formerly incarcerated people. Although the state supports Career Technical Education currently, education in prison often cannot erase the difficulty in job-hunting that comes with having a criminal record. The recent prison reform bill is incremental progress in the right direction, but bigger strides need to be taken for true change.

Closing prisons may look progressive, but it does not lead to progress towards real change, such as getting rid of solitary confinement or paying incarcerated people minimum wage for their labor. Furthermore, the charge to close prisons without a plan for those employed in the prison hurts prison towns such as Susanville, whose economic future is now uncertain. Without larger systemic efforts to change the experience of incarcerated people in prison, this feeble attempt at prison reform is simply a flimsy band-aid on a gashing wound.

Angela Shu is a writer in the California section, majoring in Cognitive Science. She is especially interested in the intersection between education and politics.