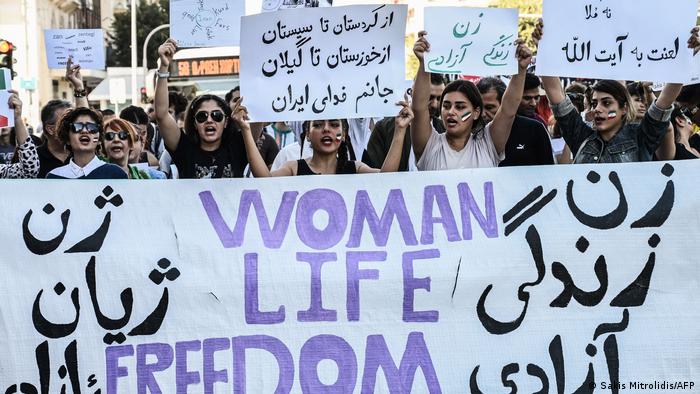 Iranians Are Protesting An Oppressive Regime

Mahsa Zhina Amini. A name that will be etched into history books as Iran grapples with its extreme, tyrannical policies. Detained by authorities on September 13th for not wearing her headscarf correctly, Amini was taken to a re-education center where she suffered a coma. Three days later, Mahsa Amini was declared dead. Iranian authorities said she died due to a heart attack, but her family refuted the allegation with eyewitness accounts and a leaked autopsy report.

Instead, Amini’s family says that the Iranian police beat her to death.

Consequently, protests have spread throughout Iran and the rest of the world. Protestors demand that Iran takes responsibility for its actions and repeal the compulsory hijab policies. The hijab law is loosely defined as covering modesty, a concept that differs in each region. This loose definition allows the Iranian government to create a task force—”morality police”—to punish those who don’t follow their perceived version of Islam. These rules are mostly focused on policing women, although the police can technically also punish men who don’t wear modest clothes.

The hijab, an important rule in Islam, is defined differently by each Muslim. There is a general consensus that to follow the hijab is to dress modestly regardless of gender. Many Muslims believe dressing modestly for a woman includes covering their hair with a headscarf or veil. This belief leads to many people associating hijab with the headscarf many Muslim women wear, narrowing the ways in which the hijab is defined. Iran defines itself as an Islamic republic, meaning the government uses perceived Islamic guidelines as the basis for its rulings. One of these rulings includes the limited definition that to wear a hijab is to cover your hair.

However, the problem with forced headwear goes much deeper as Iranians ask for basic freedom of expression and democracy. Iran has not had a democratic government since the US intervention in 1953, when  (with the help of British intelligence servants) the CIA staged a coup to remove Prime Minister Mohammad Mosaddeq. Mosaddeq was fighting for sovereignty over Iran’s oil industry, which was previously controlled by Britain. By reinstating the monarchy, the U.S. and U.K. protected their oil interests but put Iranian lives in the hands of a dictatorship.

Altogether, it is clear that the hijab has become another form of control politicians exert over women through extreme rulings under the guise of religion. Iranian women make up “60% of university graduates and holders of higher education” but still don’t have many of the same opportunities Iranian men hold. Women are told when to put on a headscarf, when to take it off, and given a variety of definitions that fit the current leader’s political views. President Hassan Rouhani denounced the hijab rulings in 2017, but his successor and current conservative president Ebrahim Raisi cracked down on women who didn’t follow the hijab. Therefore, women lead most protests against the regime as they fight for equal rights, freedom of speech, and more. To put it simply, Iranians want a separation of religion and state.

Additionally, the death of Amini, who was born to a Kurdish family, has shone a light on the Kurdish community in Iran. The Kurdish people are a tribe of people indigenous to “Kurdistan,” a region consisting of the mountainous regions of Iran, Iraq, Syria, Armenia, and Turkey. Though they never had a physically stable state, the Kurds have existed for centuries. To the Iranian government, the Kurds have always been seen as a threat. One Kurdish activist wrote, “They know that the only group that can shake them up are the Kurds.”

To silence the Kurds, Iran has actively participated in a “cultural genocide” intent on erasing their identities. The Washington Kurdish Institute wrote, “Iran’s Kurds have long faced major discrimination and oppression from the Iranian theocratic government whenever expressing themselves through politics and culture, and also historically from the previous regime under the Shah.” When Iranian Kurds face so much oppression, it is essential to mention Mahsa Amini’s Kurdish name, Zhina. Many Iranian women often can get away with a fine if they do not wear the hijab, but Zhina was Kurdish, something the Kurdish community has repeatedly highlighted.

Through the analysis of Iran’s current political climate, it is apparent that the government of Iran is unstable. The leader chooses a set of policies that expresses his own beliefs without looking at the interest of Iranians. However, all the previous leaders seem to hold contempt for the women of their country. This contempt, of course, is not limited to Iran’s government, as we continually see examples of men controlling women in various parts of the world, whether it be abortion rights in the U.S. or hijab bans in France.

In an interview with Hasti Mofidi from the Iranian Students’ Cultural Organization at UC Berkeley, she said that Iranian women are fighting for “azadi,” or “freedom.” She says Iranians have no right to any expression including things as innocent as singing and dancing. Regarding the risky natures of these protests, Mofidi said, “These people are fighting with everything they have for these futures.” The new generation has nothing to lose as they are already living in an authoritarian state with no freedom and little to no rights—with women facing the brunt of it.

As Iranians continue to fight for their basic human rights, it is important that the world shines a light on their struggles and lets them know they’re not alone. But this is a fight Western media needs to show for what it is: a fight against a dictatorship, one of the many around the globe, and not a fight against Islam. Iran does not need another failed Western intervention; it needs solidarity and support as Iranians continue to die for what they believe in.