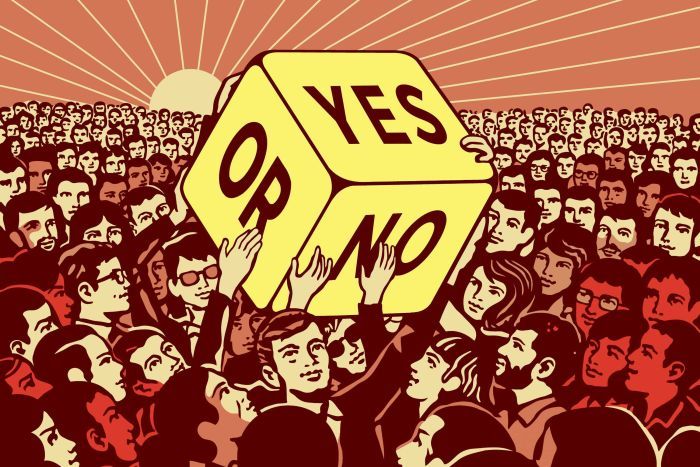 To Form a More Volatile Union: The Danger of Direct Democracy

In recent years, a growing cacophony of grievance from the progressive left has targeted our unrepresentative, antidemocratic, dysfunctional Senate. Much of this frustration has materialized in calls to end the filibuster. Though, one wonders if such decided advocates will change their tune when former GOP Senate Majority Leader Mitch McConnell returns to his old job and finds it much easier than before. Only time will tell. Regardless, eliminating the filibuster is a reasonable if debatable proposal. But the understandable disillusionment and cynicism with our political climate become unreasonable when we hear calls for “replacing the present-day elected oligarchy with…direct democracy that empowers citizens,” as openDemocracy founder Anthony Barnett wrote in a July piece.

This is easy—and lazy—rhetoric. If only it were as simple as empowering “the people” to enact the will of the public. We indeed lack pure representation in our representative government. Yes, rural states have disproportionate power in the Senate. Corporate money and lobbying are enormously influential. The Electoral College is so outdated it requires carbon dating. We will never have purely direct or purely representative government, and we should not strive for either. A healthy political system balances the two, and at issue is what that calibration should be. An ideal balance does not hold direct and representative democracy in equal proportion. Instead, the model government system is primarily representative with highly restricted popular referenda.

Californians have firsthand experience of referenda run wild. Take the wasteful 2021 Gavin Newsom recall effort. The recall qualified for the ballot with signatures equal to only 12% of the votes cast in the last election and cost upwards of $200 million. In addition to costing money, referenda can inflict irreparable harm. Even propositions passed in a forgotten fervor decades ago can have enduring and damaging effects to this day. California Proposition 13 typifies this danger: it capped annual property tax increases at 2% from 1976 property values, crippling public education funding and exacerbating wealth inequality. Voters passed Prop. 13 in an ephemeral period of extreme anti-tax sentiment, but Californians are still stuck with it today.

Furthermore, the binary yes-or-no nature of referenda renders them more directly susceptible to special interests than legislatures. In California, for example, industry groups spend immense sums of money to lobby for or against certain ballot propositions. These corporations insidiously toy with the language of their sponsored referenda to trick voters into voting their way. These tactics are the slyer equivalent of the tobacco industry funding a proposition that asks voters, “do you not not want non-smoking smoking?”

Given their dangerous immutability and special-interest vulnerability, why have referenda at all? In short, referenda are useful in exceptional moments when the legislature is so grossly out of touch with the public that a reassertion of public will is necessary. Take the recent Kansas vote to preserve the right to abortion in the state constitution. In the wake of the Dobbs decision overturning Roe v. Wade, the overwhelmingly anti-abortion Kansas legislature would have passed draconian restrictions if given half a chance. The landslide vote by twenty points in favor of abortion rights repudiated the Kansas legislature, illustrating the value of direct-democratic expression in such extreme circumstances.

Now to the critical question: when are referenda warranted, and how can voters preclude propositions pushed by corporate or special-interest minorities? The answer: by setting a very high threshold for referenda to qualify and pass. Perhaps a proposition should require the signatures of 30% of the electorate to qualify and 55% of the votes to pass. Under this framework, the public can assert its will if the legislature directly contradicts the views of the majority. Simultaneously, this structure minimizes special-interest or impulsive-driven propositions that wreak irreversible havoc.

When questions of monumental importance are arbitrarily given to the public—subject to fleeting moods, misinformation, and special-interest influences—the results can be catastrophic. Because this referendum mechanism is dangerous and far-reaching, it should only be used when necessary. In an ideal governmental structure, the legislature and the public balance each other’s wayward tendencies. Usually, the legislature needs to temper the public’s impulsive desires, but the public must occasionally check the legislature. Our political system should reflect this dynamic.