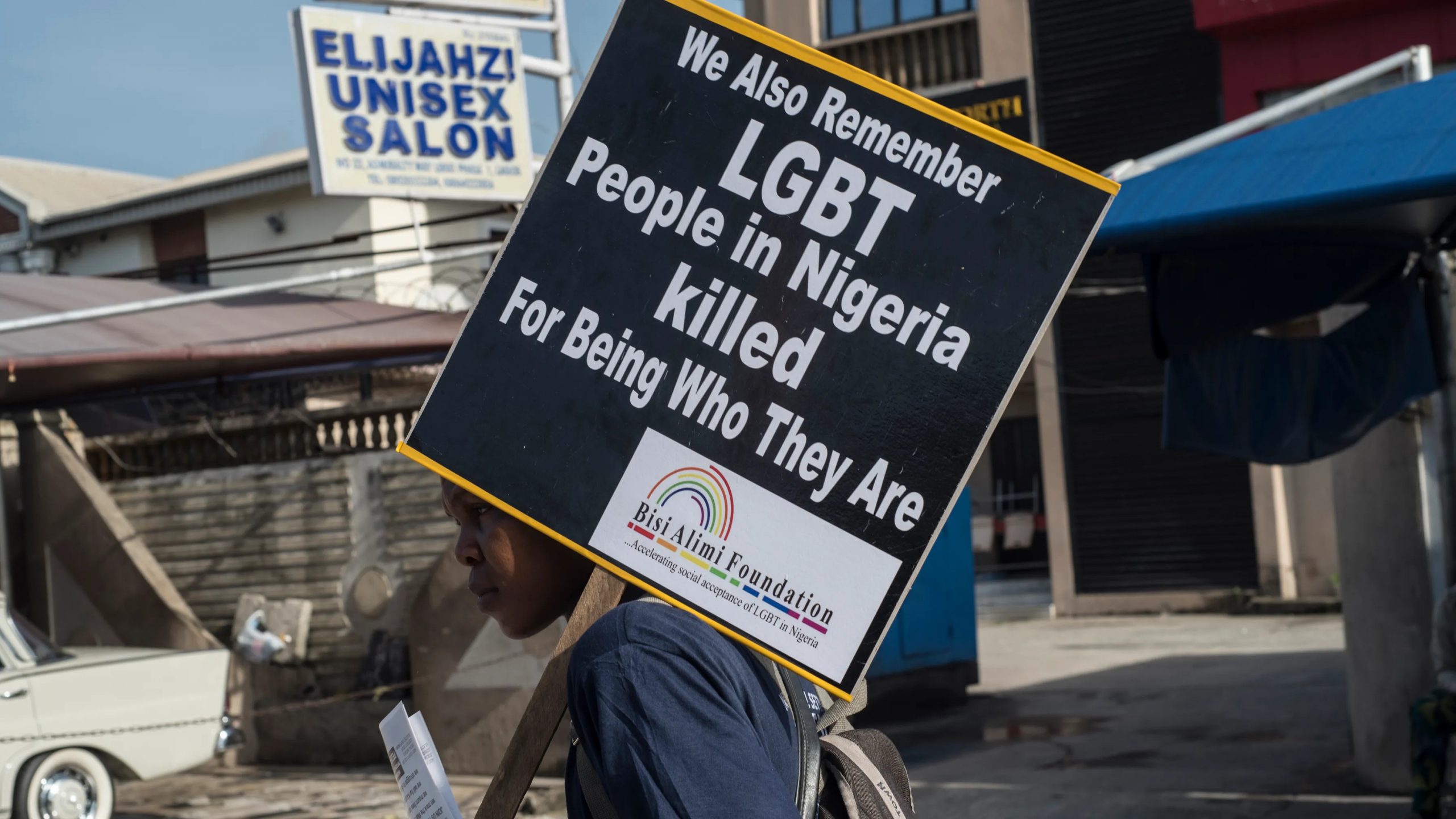 Initially set to be published in Spring 2021.

Those who routinely use Twitter are probably familiar with the massive protests that swept through Nigeria last September. There is also a good chance that this was the only coverage they saw of the event, despite it being the largest protest in all of Africa in 2020.

Like many other nations that go under-reported by major Western news outlets, Nigerian activists rely heavily on social media to attract international support during moments of political and social reckoning. This past autumn, when people across the country took to the streets to rally against police brutality, Nigerians naturally flooded platforms like Twitter and Instagram with hundreds of gripping videos and pictures from the demonstrations. Images of bloodied Nigerian flags and miles-long swaths of protestors quickly took over the EndSARS hashtag—which received over 28 million tweets in a matter of days. One upload, however, stood out from the rest for many people: the footage captured a vivid LGBTQ+ rainbow flag being held above a crowd of protesters, before panning to the left where an equally massive Nigerian flag beat against the wind only a few feet away.

The significance of this moment cannot be underscored enough. As 98 percent of the population believes that homosexuality should not be socially accepted, Nigeria is one of the most queerphobic nations in the world. The West African country is also home to more than five hundred languages, over three hundred tribes, and has a population split almost evenly between Islam and Christianity. With such a diverse social fabric, queerphobia is often portrayed by politicians and religious leaders alike as a unifying value for Nigerian people.

Anti-LGBTQ+ sentiments are present in all areas of Nigerian society. Firstly, simply being queer is a criminal offense. In 2014, then-president Goodluck Jonathan signed the Same-Sex Marriage Prohibition Bill (SSMPA), which not only outlawed gay marriage but also criminalized same-sex partnerships and queer-related civil society. Breaking the SSMPA is punishable by up to fourteen years in prison. But being queer in Nigeria is not simply illegal—it is life-threatening. Neighbors are known to report behavior deemed “suspicious” to the authorities, and parents forcing their young adult children to endure violent conversion therapy, if not outright disowning them, is not uncommon. On a few occasions, entire mobs have amassed to beat and even sexually assault queer people.

It is indisputable that being queer in Nigeria—especially openly—is a daily uphill battle. Although some have managed to create safe spaces for the queer community, accessing these resources is not an option for most. Ultimately, those who express themselves authentically in public always run the risk of becoming victims of violent, if not fatal, assault. And although queer-oriented civil society does exist, the activists who run such organizations put themselves in even greater danger, essentially painting targets on their backs for both the public and the government.

Despite the abject oppression that queer people in Nigeria face, there is another kind of tyranny that all Nigerians are forced to endure, and it comes in the form of rampant police brutality. Instead of uniting the nation in bigotry, this constant threat of extralegal violence has brought Nigerians of all backgrounds together in the fight for justice. Back in 2017, Nigerians first began sharing their painful experiences with the most notorious police division, the Special Anti-Robbery Squad (SARS), on Twitter. These stories ranged from bribery and physical assault to kidnapping and torture. The momentum garnered on social media quickly evolved into the radical movement #EndSARS which called for the complete abolition of the abusive police division. That same year, Nigerians flooded the streets of Abuja and other major cities carrying poster boards displaying the hashtag and other anti-police slogans.

Unfortunately, the initial movement did not garner adequate support from politicians. In 2018, The government promised protesters that SARS would undergo serious reform and overhaul. Most Nigerians, however, felt no real change. People were still being threatened, assaulted, and even killed, just for walking outdoors. Most importantly, officers were getting away with it. With no hope for further government cooperation, #EndSARS began to dwindle.

But this past October, the movement was abruptly rekindled after a viral video depicting SARS officers killing a man sent enraged Nigerians flooding back into the streets in thousands. The hashtag exploded back to life on social media, and protests jumped from Lagos to Enugu and several other cities, ultimately sweeping across the nation in massive waves that rivaled the 2017 demonstrations. After gaining traction internationally, solidarity protests organized by the Nigerian diaspora popped up in Canada, the United States, and several European nations.

What most Nigerians probably didn’t expect from the revival of #EndSARS was a breakthrough of new voices on the ground. Along with the typical protest photos, other images of people holding up poster boards with “#QueerNigerianLivesMatter” and “Stop Killing Queer Nigerians” written out in bold ink began circulating around social media. Video footage caught smaller groups of people traveling together within the larger throngs of protesters, shouting these slogans and proclaiming the grievances that the queer community shared at the hands of police.

Why did the queer community speak up at the #EndSARS protests? To put it frankly, police brutality is even more deadly for LGBT+ Nigerians. Along with the complete criminalization of being openly gay, SSMPA has also been used to legitimize the terrorism that queer Nigerians suffer at the hands of both other civilians and police. A year after the bill was signed, the Kano State Hibsah Corps of the northern Bauchi state went on a manhunt after a list of names allegedly related to a “homosexual association” was published by a local newspaper. Similar events have occurred in other cities. On a more regular basis, police officers profile people for anything they associate with queerness, confiscate phones to search for evidence, and then coerce bribery payment if they can’t incriminate the victim. The harassment can turn violent, especially if an arrest is made. Police will also ambush LGBTQ+ civil society, such as gay clubs, and use SSMPA as a means to brutalize participants with impunity.

This is why queer Nigerians took the resurfacing of #EndSARS as an opportunity—if not to mitigate their suffering, then at least to spread awareness of it both throughout Nigeria and the international community. Many other protesters did not embrace the outspoken queer voices at demonstrations, and activists on the ground reported getting verbally harassed and even assaulted by others. Nevertheless, for the duration of the 2020 protests, queer Nigerians were unapologetically loud, mobilizing at unprecedented levels in the name of ending police brutality. Not only did queer Nigerians attend protests together, but a temporary safe house was even set up for injured queer demonstrators. What’s more, after gaining so much attention on social media, international LGBTQ+ news outlets such as Out Magazine, Pink News, and them. published pieces covering the queer presence in the movement. Up-and-coming young queer activists such as Matthew Blaise, who gained worldwide publicity after a video of him chanting “queer lives matter” received over 3 million views on Twitter, were also recognized by the likes of Time Magazine and BritishVogue.

What does all of this mean for Nigeria’s future? Currently, both #EndSARS and the queer community have much more work set out for them. Soon after last year’s protests broke out, the Nigerian government disbanded SARS, only to give the Special Weapons and Tactics team (SWAT) its former duties. Nigerians dismissed this attempt at appeasement and continued their street demonstrations, swiftly changing the original slogan to #EndSWAT.

With protests prevailing, the government—especially president Buhari—grew increasingly hostile toward the movement. Military personnel was deployed to quell demonstrations in several cities. Rising tensions culminated on the night of October 21st, when army officers in Lagos fired live rounds into a crowd of protesters at the Lekki toll gate, killing a disputed number of people. The infamous picture of a bloodied Nigerian flag that tore through social media was taken that night. After what was dubbed the “Lekki Massacre,” #EndSARS demonstrations began to peter out once again, as people began to fear for their lives.

The queer community received no recognition from the government and much of the rest of Nigerian society still harbors the same queerphobic sentiments. With SARS effectively reanimated inside SWAT, LGBT!+ Nigerians still face obscene levels of brutality at the hands of police. From the outside, this might look like defeat.

But a lull does not condemn progress into an eternal stalemate. All movements, after all, take patience and resilience, and Nigerians of all backgrounds are well aware of that. Even though the protests have petered out, social media activity has done anything but, especially for queer Nigerians. Most importantly, the community’s presence during last year’s revival of #EndSARS set a strong precedent: when the next move for justice is made, queer Nigerians will be on the frontlines.