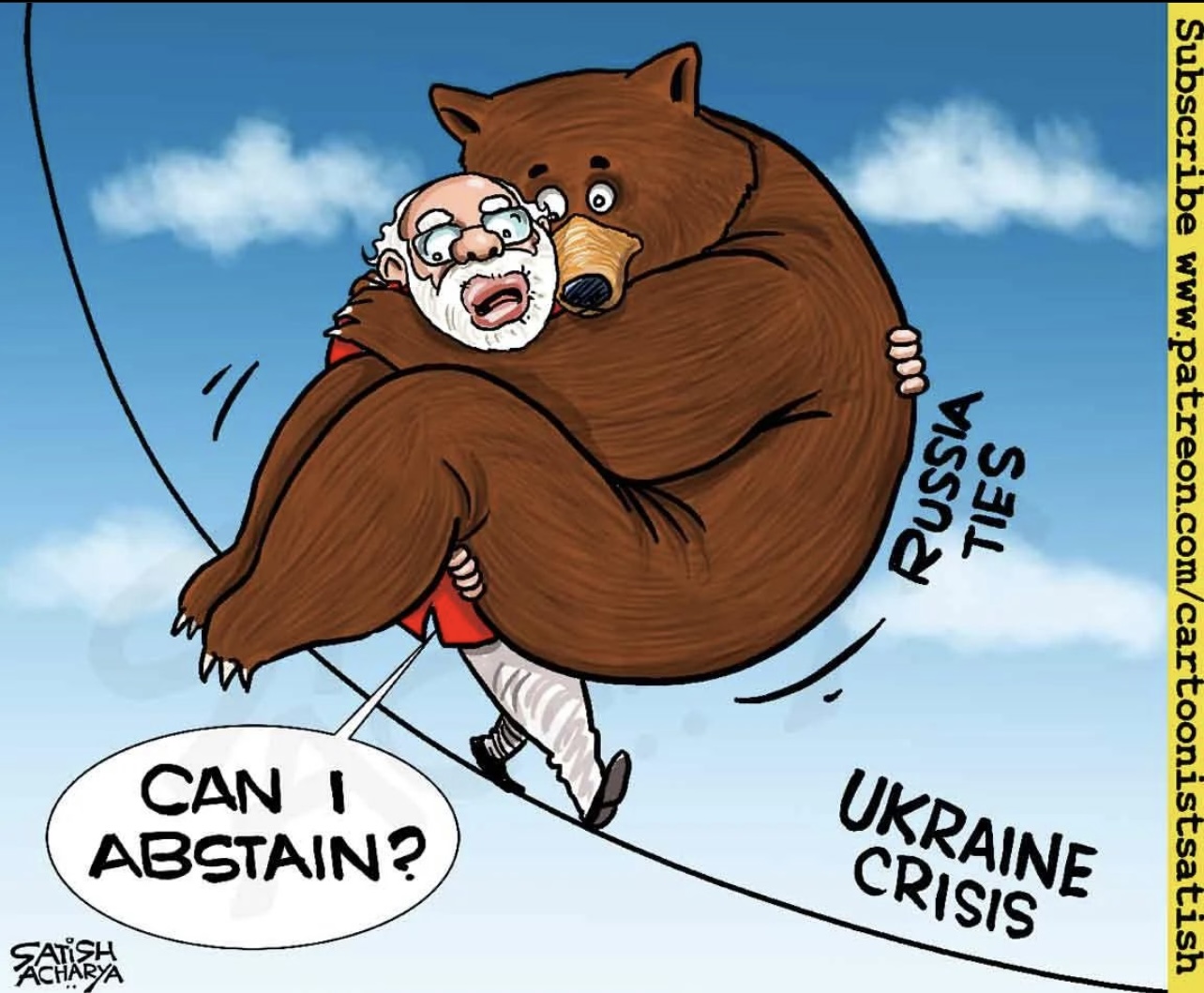 The international political community, a victim of increasing globalization, has grown to be an intertwined, tangled web of complex alliances. Indian Prime Minister Narendra Modi has spent his years in office with an intense focus on foreign affairs and international relations, engaging actively with nations across the globe. While Modi works his way around the world, people wonder whether the alliances he’s building are only entangling India into the mess that is the international political community instead of securing worthy, dependable relations.

The war in Ukraine has been a gargantuan event in international politics, with certain nations voicing strong words of discontent while others, like India, remain unable to provide a concrete statement. Its volatile and tumultuous nature has involved mass destruction of land, resources, and, most importantly, lives. Most nations have been vocal about their discontent regarding the ongoing crisis, taking a prominent stance supporting Ukraine and offering help. The war has impacted Russia’s legitimacy with countries not only condemning Putin’s actions but also acting on them by freezing his assets in their nations, for example. In contrast, India’s stance, or lack thereof, is extremely controversial as Modi has remained neutral in all public statements regarding the invasion of Ukraine. The crux of this neutrality lies in the conflicting and complex ties that India has with both Russia and the United States, leaving it stuck between a rock and hard place.

HISTORY OF ALLIANCES: INDIA AND RUSSIA

Historically, India has been Russia’s biggest arms buyer with sales from 2016 to 2020 approximating 6.6 billion U.S. Dollars and making up 23.3% of Russia’s total sales. Arms that India has purchased include tanks and missile systems as well as Russia’s S-400 air defense system. This makes Russia an important ally for India. Over the decades, when ties with the U.S. were a mere diplomatic formality, Russia supported India and provided the country with resources. Russia has also been a key player in assisting India in United Nations conferences and committees. When India used its military power to take control of Goa and Daman and Diu (territories located on the Indian subcontinent) from the Portuguese in 1961, several countries including the U.S., the UK and Turkey put forth a resolution condemning these actions. Russia, in support of India, opposed this proposal, kickstarting a strong and prolonged alliance between the two countries. Post this incident, India-Russia relations unfolded to result in bilateral dialogue, official treaties, and an immense amount of support on an international platform.

The highly coveted United Nations Security Council, in which Russia has veto power, aimed to pass several resolutions regarding the Kashmir conflict in India. Since then, in three particular instances—in 1957, 1962 and 1971—when the United Nations desired to intervene in Kashmir, Russia vetoed these resolutions in support of India as a sovereign nation having the sole authority over its internal affairs and conflicts. The “Declaration of Strategic Partnership” (2000) and “Special and Privileged Strategic Partnership” (2010) signed by both countries solidified the already growing bond between them. The latest incident, in 2019, when India imposed section 370 in Kashmir, caused the international community to condemn their actions as a country. Russia on the other hand made a statement labeling the ongoing events as an “internal affair”.

A NEWFOUND ALLIANCE: INDIA AND THE UNITED STATES

While considering the Indian-Russian alliance, there lies a strong, fortified history of assistance, exchange and support, with amicable relations. However, the newfound trust and partnership between India and the United States of America were enough for India to avoid speaking in support of Russia and Putin.

India-U.S. relations are of a far different nature than those between India and Russia. While Russia, on one hand, assisted India in several instances in the recent past, the United States and India are currently working together in a ‘partnership’. This partnership aims to tackle several problems on a global stage. The White House released a fact sheet that summarized the bilateral dialogue between the U.S. and India. It mentioned, in detail, a plan composed by the two countries to battle COVID and to take the forefront in the COVID relief response. The assistance provided by the U.S. included allocating funds towards India’s COVID relief through not only USAID but also by keeping a budget of approximately sixteen million dollars within the CDC (US Centers for Disease Control and Prevention). The COVID relief plan doesn’t halt at simply doing damage control but also makes a development plan that involves structural change with regards to infrastructure, including 5G, space technology, clean energy and interoperable network architectures.

Southeast Asia has had several shifting alliances and hostile relations amongst nations, one of the most significant ones being Sino-Indian tensions and conflict. Russia and China have a growing alliance—one that could threaten India and its external and internal sovereignty if India does condemn Russian actions in Ukraine. Furthermore, Pakistani ex-prime minister Imran Khan was in Russia, engaging in dialogue with Putin the day that the war began, indicating their strengthening relationship. India’s tension with its neighboring states is not unknown to the international community. The threat of these countries potentially being aided by Russia, an extremely powerful nation that has previously been a close ally to India, increased pressure to hold on to their relationship. Pakistan and Russia becoming strong allies forces India to ensure they don’t sever ties with Russia, due to the tension between the countries regarding Kashmir. Russia backing Pakistan against India would result in an inflow of resources and international support towards them threatening the control over Kashmir.

India has abstained from voting on the Russia-Ukraine war 11 times in United Nations committees and conferences. From the United Nations General Assembly (UNGA), United Nations Security Council (UNSC) to the United Nations Human Rights Council (UNHRC). India’s dilemma and predicament can be clearly seen through its abstinence in the several aforementioned incidences. No matter what the committee or what the focus, whether it be human rights or national security in consideration, India has chosen not to take a stand for or against Russia with regards to the ongoing war. Statements made by the Indian government and Prime MinisterModi, reflect India’s opposition to violence, human rights violations and even go to condemn actions that undermine territorial integrity and sovereignty. Yet, India’s silence on Russia’s abhorrent invasion of Ukraine only indicates that the nation does prioritize these sentiments where it does not benefit them on an international scale. India also continues to purchase resources from Russia and has even increased its Russian oil imports. In spite of all the aforementioned actions undertaken by India, it has still tried to show its discontent with Russia by reducing its arms import from them. India’s responses to the war and Russia have been confusing, to say the least, a reflection of their own predicament.

While balancing its alliances with Russia and the United States of America, India has been unable to condemn Putin and his actions. The intricacies and complexities of ties amongst nations, and the growing influence of one country over the internal politics of another, have put India in a tough position. Globalization has resulted in an amplification of one nation’s actions and their impact on the other. Growing economic and political interdependence has severely reduced the significance of territorial borders while simultaneously increasing the power and influence of a single country’s actions. India’s history with Russia and present with the United States, places it in a difficult position however, it is important to ask- with this tangled web of alliances that exists in our world today, will a country ever be able to take a stand for human rights violations and illegitimate actions without putting their own national security at risk? Will alliances always hold greater value than these basic considerations?