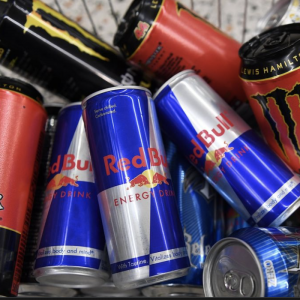 Energy Drinks: Does this quick fix really come without strings?

Energy drinks feel like the perfect quick fix. After drinking one can of Bang, I feel equipped with enough energy to go on a run, take two midterms, and still spare power to go to the Cal-Stanford football game. It just doesn’t seem like drinking one cup of coffee can give me the equivalent feeling of drinking a caffeinated energy drink. What’s even better than just drinking an energy drink is drinking one that is zero calories and zero sugar. However, in my daze that I like to call “energy drink high,” I, like many others, overlook what it is about an energy drink that can make it seemingly healthy and still work like a charm. The effect of an energy drink almost seems too good to be true, and researchers are working to uncover if the short-term rewards of energy drinks really come without long-term impacts, and whether or not we should be alarmed by these effects.

Almost one-third of American teenagers between the ages of 12 and 17 consume energy drinks annually. The American Journal of Preventative Medicine finds that energy drink consumption has dramatically increased in the past ten years among adolescents, young adults, and middle-aged adults alike. With such a substantial amount of the American youth drinking these beverages at high and consistent rates, it is vital to learn about the contents of energy drinks.

Delving into the effects of energy drinks is complex because researchers uncover both beneficial and detrimental impacts from these drinks. To determine if the overall impact will be positive or negative, researchers look at the ingredients in different energy drinks to uncover acute or chronic impacts. Ultimately, the research findings justify stronger regulations from the U.S. Food & Drug Administration (FDA) as the uncertainty regarding health effects warrant more attention.

There is already data to suggest that energy drinks have negative health impacts, but as the Journal of the American Heart Association (JHA) notes, these drinks have ingredients that are under-researched and unfamiliar, meaning that some of their possible effects are unclear. The reason an energy drink is known to be a “quick fix” is because of its highly concentrated caffeine percentage. An energy drink with 320 mg of caffeine, such as Redbull and 5-Hour-Energy, has four times the amount of caffeine as a cup of coffee. In a randomized, double‐masked, placebo‐controlled, crossover study of 34 healthy volunteers, the JHA found that energy drinks pose alarming risks to the heart. They noted, “Energy drink consumption has been associated with cardiac arrest, myocardial infarction, spontaneous coronary dissection, and coronary vasospasm.” The possibility of undergoing any of these conditions is cause for concern as each of them can be fatal or cause long-term health repercussions.

Furthermore, between 2007 and 2011, the number of emergency department visits related to energy drinks in the United States doubled from 10,068 to 20,783 —1 in 10 of which resulted in hospitalization in 2011. In that same year, the National Center for Complementary and Integrative Health (NIH) found that “​​42 percent of all energy drink-related emergency department visits involved combining these beverages with alcohol or drugs (such as marijuana or over-the-counter or prescription medicines).” This combination of energy drinks and alcohol is alarmingly common in college, as the CDC noted in 2017 that “31.8% of young adults aged 19 to 28 reported consuming alcohol mixed with energy drinks at least once in the past year.”

The NIH finds other challenges faced by people consuming energy drinks include a disturbance of sleep patterns, dehydration, damage to nervous system, and higher anxiety—all of which are not part of the marketing strategies for energy drink corporations.

Although there are many adverse effects that are associated with energy drinks, there also seems to be a potential for non-adverse impacts, particularly related to metabolic processes. Energy drink Celsius claims that its formula induces weight loss, marketing their drink to be targeted to living a “fit” life. Their branding promotes a culture of community, fitness, and healthy lifestyles. In their website, they cite six studies that claim that Celsius holds weight loss properties because of its thermogenic capabilities. Celsius claims:

The research doesn’t lie. All of the studies show that CELSIUS has thermogenic properties which help make it one of the most advanced energy drinks on the market.

Thermogenic properties are proven to increase metabolism and make the nervous system more active. In turn, this causes your body to burn more calories and body fat than you normally would with exercise alone.

In a 2008 study with healthy college students on thermogenic drink properties on ​​Celsius, FD, and Delray Beach, researchers uncovered that drinking one of these energy drinks increased resting energy expenditure, free-fatty acid concentration, and glycerol appearances. The conclusion states, “ If sustained, these changes may help to promote weight loss and improve body composition . . . however, these findings are currently unknown as are the general safety and efficacy of prolonged consumption.”

As a student at UC Berkeley, I have often found myself fighting for extra hours of the day to finish my work. And when I feel myself falling asleep, I have turned to a Yerba Mate or a Celsius to pick me up. My entire fall semester was spent rotating between the two drinks every day of the week. Over winter break, I decided to wean myself off of this addiction, and while I’m no doctor, I started to notice my skin clearing and sleep schedule fixing itself. Maybe I was starting to drink more water or just feeling less stressed, but researching this article has inspired me to research ingredients and be conscious about what I choose to consume.

It also prompted me to consider whether there is sufficient government regulation on energy drinks, given the limited understanding we have of the long-term repercussions of their ingredients. The FDA does not regulate energy drinks but rather just their ingredients. Still, their regulation is limited and calls for scrutiny. In 2013, a joint group of doctors, researchers, and public health experts started this conversation by sending the FDA a letter calling for action that changes energy drink regulations. They urged that there is a “robust correlation between the caffeine levels in energy drinks and adverse health and safety consequences.”

While it is uncertain whether or not energy drinks have more beneficial or detrimental effects, it is certainly clear that the lack of long-term research on energy drinks calls for increased safety measures surrounding these beverages. Until more information is uncovered, the FDA needs to place more attention on energy drink regulations, and caffeine-lovers should be cautious when consuming energy drinks.