Sydney was a sophomore at the University of San Francisco when she took magic mushrooms for the first time. Unlike most new users of the drug, however, she was not interested in “tripping”. The warping of reality, intense visual effects, and unpredictable results seemed like too much to handle for her introduction to the world of psychedelics. Instead, Sydney was looking to find her way out of depression by microdosing – taking smaller, quarter-sized doses of a mind altering substance for a subconscious effect. A year later, Sydney has left behind her Lexapro in favor of  regularly microdosing, ingesting a quarter of a gram of dried psychoactive mushrooms on most mornings.

“I was definitely scared of them, I had never pictured myself doing anything like that,” she recalls.  Despite Sydney’s initial hesitations, her new roommate introduced her to the drug by describing her own experiences with the benefits of microdosing. She never imagined they’d stay awake until five in the morning, talking on the couch and popping little grayish psilocybin pills.

Sydney is just one of many adults in the U.S. who are turning to psilocybin mushrooms as a way of handling a global landscape filled with new challenges. The world has grown increasingly curious about the microdosing movement – a Reddit forum on microdosing has over 192,000 subscribers who share experiences, tips, and information for newcomers and experienced users alike. Users buy or make capsules of powder, add shrooms to their food, or simply eat the plant raw every few days. Microdosing was once the hush-hush secret of Silicon Valley entrepreneurs and big business executives looking for a competitive advantage, an alternative to stimulants, or a new way of working. Now, it’s turned into a movement in mental health.

New research on the therapeutic effects of psychedelics has culminated in an effort to “decriminalize nature”. Fifty years after Nixon’s Controlled Substances Act stinted studies on the drug, modern interest has sparked from the remnants of an earlier era of American counterculture. Mushroom enthusiasts and bipartisan policy leaders alike are looking to the promise of emerging markets for psychedelics to promote their potential psychological benefits in treating conditions like major depressive disorder, OCD, and addiction.

Within the three years leading up to the pandemic, the self-reported rate of psychedelic use in American college students more than doubled to at least 8.6 percent. Drug use statistics from the COVID-19 pandemic show a rise in the use of marijuana and psychedelics for teens, and a surprising decrease in alcohol use for the same age group. The pandemic itself may be a factor in influencing the popularity of psychedelics and psychedelic therapy – recent increases in knowledge have encouraged attempts by young adults to enhance their interpersonal connectedness and ease the anxiety that comes with social isolation.

New science on psilocybin as an antidepressant is optimistic – some trials show that psilocybin may be just as effective as traditional selective serotonin-reuptake inhibitor medications (SSRIs) at fighting depression. Studies show that brain functions may be altered for up to a month after a single high dose of psilocybin, suggesting that the drug may aid emotional resilience and flexibility in the brain. Current knowledge of the science behind shrooms is incomplete, but most information explains that they help the brain create new connections and increase neuroplasticity. One survey indicates that after microdosing psilocybin consistently, almost half of users who took SSRIs reduced the dosage of their psychiatric medication or even stopped completely.

Psilocybin dosing is serious business. Those with genetic predispositions to schizophrenia or bipolar disorder, for example, may be at risk of psychosis. Nausea, anxiety, and paranoia can accompany what may feel like a near-death experience, leading to a “bad trip”. Users who find themselves in unfamiliar places or fearful mindsets may suffer the most. To Sydney, that was a risk she was willing to take. “The benefits very much outweigh the cons to me. And in a controlled environment with a healthcare professional, there could be a lot less risk,” she hopes. Sydney refers to a growing industry in which hallucinogenic drugs are administered in medical treatment centers under close supervision.

Trends demonstrate that pandemic-era microdosers usually aimed for self-medication rather than recreational enjoyment, a kind of behavior that could be driven in part by prolonged waiting times to traditional therapy and medication services for patients with mental illness. One in four people who reported using psychedelics during the last year did so through microdosing, and more than seventy-five percent did so without any side effects. For the estimated twenty percent of psychedelic users who rely on prescription medications for mental illness, that’s a preferable outcome to the laundry list of warnings found on traditional pill bottles. Sydney herself notes how the effects of microdosing were similar to the kind of “enlightenment” that Lexapro helped her achieve, but without some of the risks that can accompany SSRIs. Some studies, however, argue that the small effects of microdosing are actually just a placebo. Sydney disagrees, citing the mushroom mindset against skeptics – “What it did do is open doors for me to see things in different ways, and that outcome resulted in my depressive symptoms lessening,” she says.

Sydney acknowledges that there are still negative connotations around using mushrooms. “I think it’s way less than it was five or ten years ago, but it’s still, ‘you’re lazy, you’re a druggie’.” People who use mushrooms as an aid to self care, you usually don’t hear from those people,” she notes, hopeful that antiquated attitudes will soon change. It’s unclear exactly how many Americans currently microdose psilocybin, but one study approximated 32 million lifetime psychedelic users in the United States in 2010. It’s hard to say how much the field has grown in the twelve years since, but its trajectory looms larger than ever.

Psilocybin is not the only taboo substance under research for its therapeutic effects – ketamine, LSD, and MDMA are just some of the other “party drugs” that have recently captured scientists’ attention for treating PTSD, treatment-resistant depression, and other mental illnesses. Results show promising effects for vulnerable populations like military veterans or survivors of trauma, along with the potential to save millions of dollars in healthcare costs.

Advocates for microdosing believe mushrooms and other natural medicines could play a large part in the future of industries in healthcare and agriculture. Humans have practiced holistic healing through psychedelics for hundreds, if not thousands of years. Besides those with psychedelic properties, mushroom species of all kinds have found value as herbal remedies or gourmet cuisine.

Though U.S. citizens have had a long standing love affair with their pill bottles, the growing opioid epidemic and the rise in prescription drug abuse are fueling a for-profit pharmaceutical industry dependent on capital and returning customers at exponential rates. While Western culture tends to prioritize prescriptions over herbal remedies, America’s bipartisan push toward psilocybin decriminalization could be an attempt to replicate the huge financial benefits received by the legalization of marijuana.

In May of 2019, Denver, Colorado became the first city in the United States to decriminalize psilocybin mushrooms, removing criminal punishments for users older than twenty-one, with no major issues reported since. The move was the first of many in a policy that has now taken root in Oakland, Santa Cruz, Detroit, Ann Arbor, D.C., and the entirety of Oregon. Rhode Island, Oklahoma, Hawaii, Michigan, and Missouri are among other states that have recently introduced legislation or task forces aimed at researching psilocybin. 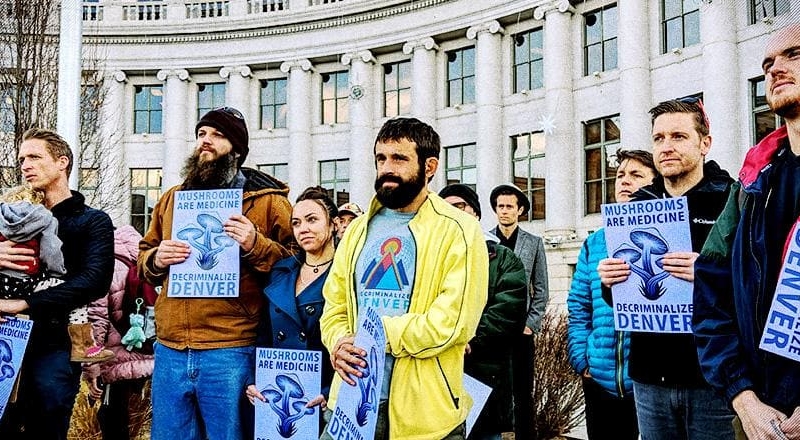 Decriminalization helps to focus law enforcement efforts on issues like violent crime, instead of targeting drug markets that disproportionately affect people of color and the poor. Monitoring mushroom vendors for quality control and spreading scientific information can help reduce risks for users who once had to rely on popular culture stereotypes and word-of-mouth for warnings or advice. One entheogenic plant church in Oakland was raided in 2020 due to concerns about the “for-profit” sale of magic mushrooms for religious practices, but today the church continues to invite members to safely source regulated shrooms from within their doors.

Legalization may be afoot as encouraging research emerges, but awareness education and training will have to follow suit to change public perceptions around psilocybin use. Berkeley itself has launched The UC Berkeley Center for the Science of Psychedelics (BCSP), which aims to “explore psychedelics as tools for understanding the brain and mind, enhancing well-being, and deepening spirituality”. The center applies an interdisciplinary approach to its studies on all aspects of psychedelic therapies, hoping to add progress to public understanding and create better knowledge about what psychedelics can do for the world. Undergraduate student organizations, like Psychedelic Science @ Berkeley, have also begun to draw interest from wider audiences as national policy and student life evolve together.

“It makes sense that a place like Berkeley would be at the forefront of this, both because of the research and the culture. At this school there’s a huge problem with mental health, but people are also really open to trying new things,” says Sydney, acknowledging both the high-pressure environment of college and Berkeley’s history as a part of progressive movement. For Sydney, mushrooms have been a way to better make sense of a world full of chaos and competition.

“They help you widen your perspective, and to me, that is the ultimate force of healing.”

Interested in learning more about The UC Berkeley Center for the Science of Psychedelics? Visit https://bcsp.berkeley.edu/ or check out BCSP’s newsletter, The Microdose, at https://themicrodose.substack.com .

This article does not condone the use, distribution, sale, or possession of illegal substances as classified by The Controlled Substances Act. The information in this article is for educational purposes only. Names of individuals have been changed for privacy reasons.

Olivia is a staff writer for the U.S. Section and a third-year political science major at UC Berkeley. Topics of interest include art and performance media, criminal justice reform, constitutional law & privacy, and the War on Drugs. oliviagonzales@berkeley.edu