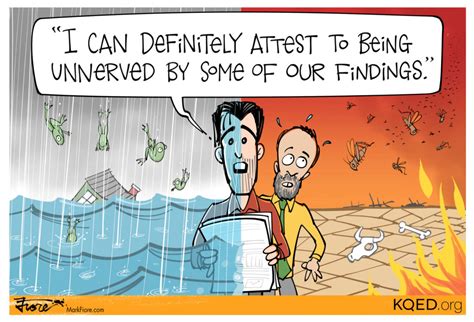 Why Science Should Strike: The Real Cost of Intellectual Labor

We often don’t think about why our car gets a certain amount of miles per gallon, or who tells the weatherman what to say on TV or who is actually monitoring the sea level rise and melting ice caps we constantly hear about. And that’s to be expected, just like how we might not consider who designed our cars, or who bagged our chips or why water flows from our taps. Climate and environmental scientists’ work is everywhere, but not often recognized.

However, would we notice if all of a sudden they stopped working and our steady flow of climate science research, including everything we know about the worsening state of the climate, ended, even temporarily? Even if we noticed, how much would it really change about our day-to-day lives?

This information disappearance is a reality we should consider after the latest Intergovernmental Panel on Climate Change (IPCC) Report came out on February 28, 2022. Some scientists are calling for a “science strike,” encouraging a massive walk-out among the scientific community to temporarily withhold research from world leaders on the inevitably worsening climate. Advocates for this strike note there is little value in the simple “document[ation of] the decline of human well-being and planetary health” without action. Most climate change scientists refuted the idea of a strike when it was first proposed; it sounded outlandish, unproductive, unprecedented.

That is precisely why they should do it.

A strike would likely take the form of refusal to work on another IPCC report until policy makers show a concerted effort to abide by the abundance of damning science we already have, thanks to the researchers. This February report was the IPCC’s sixth assessment, each the result of years of research and dedication by environmental and climate scientists around the world.

In the weeks after the release of the IPCC report, scientists around the world participated in “non-violent civil disobedience” at institutions like Chase Bank’s headquarters in the US, the German Ministry for Economy and Climate Protection, Shell PLC headquarters in England, Mexican government buildings, Italian oil and gas companies, and the Spanish National Congress. Researchers participating in these protests are being arrested and silenced, but their message to politicians and corporations is clear: humans are nearly out of time to mitigate the worst of climate change’s effects, and it is inconceivable that the world’s leaders still do not treat it as a dire emergency. This wave of protests and arrests only strengthens the call for a science strike—climate researchers represent the billions of people across the globe whose cries for action on climate change are falling on deaf ears.

If researchers were to strike, it would not have the same fiscal impact that a strike at a major car manufacturing facility or popular food brand factory might have. It might instead simply feel as though the researchers refusing to publish another IPCC report are being ignoble or selfish. In a symbolic strike which seeks to remind politicians and world leaders that they do not freely receive the science that they routinely send to the bottom of the agenda, it is necessary that people initially feel the scientific community is acting unjustly. Then, this discomfort and betrayal will prompt people to ask themselves, and their politicians, why they feel it is so unjust that scientists do not compile another doomsday report which politicians already ignore?

The purpose of this report in the past has simply been to condense the most important findings regarding climate change so that our governments and corporations, as well as individuals, can best mitigate its effects. This year, however, it had a “substantially different [structure]” because it used “holistic framing,” with detailed policy suggestions and necessary timelines included alongside the objective science.

The strong stance on climate change and also what policymakers must commit to for any hope of avoiding the currently inevitable 1.5 degrees of warming by 2040 reflects the frustration the scientific community has been feeling with the political world for decades. The proposed science strike is an understandable position to take, especially for scientists who have spent their lives publishing findings on the downfall of the climate, while politicians who pledge to affect “real” change are not actually working with scientists to ensure that people thrive.

Currently, more than 25% of US Congress members are either active climate deniers or have not spoken in support of climate change mitigation policy, despite climate change being a “top priority” for young voters in the 2020 presidential election. This is striking, especially considering that already, most of the developed world’s climate policies “rely on greenhouse gas emissions-reduction targets that will prove ‘too little, too late’ by deferring strict pollution controls too far into the future.”

Even those within Congress who acknowledge that climate change is an imminent threat are not able to prioritize effective policies that align with current science.  This failure results in a lack of efficient public transit, continued reliance on fossil fuels, overuse of single-use plastics, overly permissive fuel economy regulations and unchecked industrialized agriculture. These policy issues are all well-known aggravating factors in climate change, yet meaningful action against them has failed to surpass the crocodile-infested lobbyist moat, let alone the permanently gridlocked palace gates of the Senate, to this day.

The 25% of climate science deniers in the current US Congress have accepted together approximately “$61 million in lifetime contributions from the coal, oil, and gas industries.” This corruption continues, despite the fact that “two-thirds of adults believe that the government is doing too little to address the climate crisis, and 80 percent support tougher limits on carbon pollution from power plants.” Yet, the wealthiest countries are still polluting at an unwavering rate, and their governments are doing relatively little to stop it, compared to what scientists say must be done.

Solving climate change is not a scientific issue anymore, it is a political one—not because of the voters, and not because the actions of environmentally conscious cities and nations go unrecognized—but because of the corruption within political systems that hinders systemic progress. While a science strike may capture the attention of voters, it would ideally capture the attention of lawmakers and world leaders who currently seem to use the IPCC report as a measure of how much longer they can hold off on drastic climate action.

Throughout all of this turmoil and incompetence, scientists have been tirelessly sharing knowledge on how humans can mitigate and adapt to climate change, relying on a common goal with policy-makers to improve and protect human quality of life. Over the 34 years that the IPCC has been releasing reports, “progress in adaptation has been observed across all sectors and regions.” Yet, the progress is still not enough to achieve a singular, repeated goal of remaining below 1.5 degrees of warming by 2040. Developed nations who are responsible for much of the environmental degradation in the global south as well as their own countries must shoulder much of the blame of this impending failure.

Decades of failed bills and broken promises have revealed the alleged common goal between scientists and the political world to be little more than a puppet show from the political side. What are supposed to be two pillars of society is just one, and maybe a half, which cannot support the necessary weight. Scientists have reasonable motivation to strike and temporarily refrain from sharing new knowledge—with each new IPCC report, so much of what scientists see is attempts at environmental policy that critically fail to mitigate their findings.

Bruce C. Glavovic, a scientist who worked on the 2022 IPCC report, told The New York Times that he supports a strike because “[w]e’ve had 26 Conference of the Parties meetings, for heaven’s sake… I mean, seriously, what difference is that going to make?”

So, another IPCC report may not make much of a difference in environmental and human rights while the previous six are being cherry-picked apart and set aside. The reports have done what they were initially intended to do, which was to prove to the world that humans had control over the changing climate. Since then, the science has been firm and consistent that “human-induced climate change, including more frequent and intense extreme events, has caused widespread adverse impacts and related losses and damages to nature and people, beyond natural climate variability.” But, a well-publicized and intentional strike could reignite the awareness and outrage necessary to force politicians out of office—like the 25% of US Congress—if they are not heeding the findings of the previous IPCC reports.

In the meantime, rather than documenting the results of continued political failures, scientists can focus their talents on local efforts and education. Communities around the world who are suffering the main effects of wealthier countries’ pollution need help adapting their homes and industries to the new patterns. Schools need to implement strong education programs surrounding composting, healthy farming practices, and how to recycle specific to their municipalities. Small and medium-sized businesses need help discerning whether their products are being sourced and disposed of ethically as to not recreate the issues caused by massive corporations.

The knowledge that scientists continue to provide can be going directly into local change all over the world rather than going for national government approaches. The 2022 IPCC report emphasizes the importance of changing local communities while simultaneously fighting for higher-level change—why not use a movement like the proposed science strike to do just that?

Humanity has been operating under the belief that if only it knew more about how to fix its problems, it would be saved. But unfortunately, the success of the IPCC in compiling that knowledge has not changed the profitability of pollution. Primarily, a science strike would be a much needed change within a system that refuses to change, and that is worth trying.

There is hope that this year, fresh off the 2021 Glasgow Climate Summit and with an IPCC report painstakingly crafted with chapters called “Decision-making options for managing risk,” “Climate resilience development pathways,” “Health, wellbeing, and the changing structures of communities” and “Key risks across sectors and regions,” that politicians forego their fiscal blinders and partisan distractions in favor of scientific reality.

The science strike is not a call to end research entirely and give in to a fatalist mindset. It is a radical effort to convince politicians that the people have hope, and that if politicians prioritize it, science can lead humanity to its greatest success yet: surviving itself. Only then, when they choose to act on what science already knows, should the strike end.